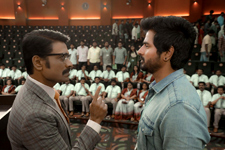 Lawrence's biggest problem is perhaps that he does not belong to the Telugu land, and tries so hard to make up for that, it becomes a joke. Style was the first example, this is the second. The references - totally meaningless and unnecessary - to the Telugu people and their bravery are so profuse in Don, you are sniggering if you are sitting with a bunch of friends, and squirming if alone. Heck, underworld dons don't care about regional sentiments - they want money and power.

The second big problem with Lawrence is a complete lack of creativity. If ever there was a god of clichés in Tollywood, this is the one; you can actually be forgiven for thinking his movies are spoofs. Indeed, one of the dangers of an average or bad product succeeding - we're talking of Style - is that the wrong lessons are inferred. Style, an atrociously clichéd movie, succeeded because of the stupendous dances. Lawrence perhaps decided it was the clichés that did the trick.

Don is done in by just about everything associated with it. India has seen really good underworld movies, right from Dayavan to Satya, Company and Sarkar. Don is a joke compared to them. There's no depth at any level, the characters talk too much and too childishly (the villian asks Nagarjuna, "Cheyyakapothe?" and as you are waiting with bated breath, Nagarjuna replies, "Nuvvu Chasthaav!" - cackle, cackle, cackle!), the editing and the look-and-feel are indifferent, songs pop in rudely into the narrative, and nobody looks menacing enough in what is basically an underworld movie.

Actually, in many ways, the romance between Nagarjuna and Anushka summarizes the IQ of the writing. If you have seen much dumber things, well, we are sorry for you.

The movie deals with a war between the mafia don of Hyderabad Suri (Nagarjuna), a benefactor of the downtrodden, and Stephen (Kelly Dorjee), an international don who wants to take over all local dons in India. When Suri will not let Stephen enter Hyderabad, a war ensues. Only, there's no strategy, nobody has great lines to say or great fundas to put, there are no chilling sequences, and the script is in general so dumb, you wish Lawrence had just re-released some other movie.

It's easy to say Nagarjuna is miscast, and so we'll say it. He smiles a goofy grin too much for a man who'd have to have a certain mental make-up to become a don. He exudes no menace, sends no chills with his dialogue delivery. This was a role for perhaps an Ajay Devgan. In Nagarjuna's defence, he perhaps would have put in a different performance with a better written role, and RGV behind the cameras.

Anushka's role is embarrassing, short, and both. And it lasts lesser time than you took to analyze that sentence. Lawrence himself stars as Nagarjuna's Man Friday, and uses his power as director to give himself a solo song in the most inopportune moment for it, that also makes Nagarjuna look like a complete duffer, reclining in a sofa and grinning dignifiedly for lack of anything else to do.

Everything else we've said earlier in the review still holds. So skip this one unless you desperately need a change from good movies. In the meantime, please answer this question - "Does Nagarjuna make a better devotee or don?" SMS your reply to any number you want, but remember, don't drink and SMS.
Share. Save. Connect.
Tweet
DON SNAPSHOT

ADVERTISEMENT
This page was tagged for
telugu don movies
don telugu movie
Don telugu movie
Don reviews
release date
Follow @fullhyderabad
Follow fullhyd.com on
About Hyderabad
The Hyderabad Community
Improve fullhyd.com
More
Our Other Local Guides
Our other sites
© Copyright 1999-2009 LRR Technologies (Hyderabad), Pvt Ltd. All rights reserved. fullhyd, fullhyderabad, Welcome To The Neighbourhood are trademarks of LRR Technologies (Hyderabad) Pvt Ltd. The textual, graphic, audio and audiovisual material in this site is protected by copyright law. You may not copy, distribute, or use this material except as necessary for your personal, non-commercial use. Any trademarks are the properties of their respective owners. More on Hyderabad, India. Jobs in Hyderabad.