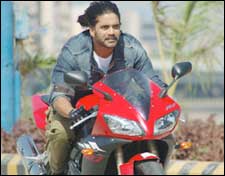 Super has bits of Dhoom, Mission Impossible, Roop Ki Rani Choron Ka Raja and probably many other movies. Akkineni Nagarjuna plays Akhil, a bike racer who falls in love with a rather Hindi-looking heroine, Ayesha Takia. She plays Siri Valli, a doctor. Her muhbola brother Sonu (Sonu Sood) is a biker bank robber who hates Akhil, and finds out he is Siri's fiancé halfway through the movie. Naturally, he forbids her from marrying him. We only find out later in the movie that Sonu's enmity with Akhil has a history: a story that is told to us so haphazardly, it hard to keep track of.

Apparently Sonu had a sister called Sasha (played by Anushka) who was crazily in love with Akhil. All three were co-bank-robbers in addition to being bosom buddies once. But after Akhil repeatedly refused Sasha's advances (saying he can't think of her "like that"), she kills herself. Sonu blames Akhil for her death, and so begins the caustic enmity.

The second half of the movie does a hairpin twist, so that part is better left untold. Suffices to say that lovers get back together and friends are re-united in the end.

The watchable parts of the movie, though, are a square-jawed Nagarjuna with a streaked-hair, heavy-metal-drummer look (only more chocolatey), that is very becoming; and Ayesha Takia as the unlikely doctor who wears string cholis and glittering saris to work, and dances with snake-like sinuousness and ease to the remixy Sandeep Chowtha tracks.

The tracks sound indistinguishable from each other; like one giant composition chopped up into 2-minute pieces and placed with unwavering periodicity through the movie. But like all remixes, they earworm their way out with you when you leave.

In fact, the whole movie is like one giant music video. Good lookers, catchy beats, guns, leather and motorbikes, and shot in Hyderabad, Mumbai, Goa and a bunch of foreign locales. Then there is the predictable appearance of Ali who plays a roadside artist in a Scottish kilt that flies up often to incite a few laughs. And, of course, Brahmanandam who plays a polygraph expert, getting Ali to tell the truth about and sketch the face of the motorbike robber.

Finally, there are the kickass dialogues. Not sure if they will be as legendary as "Kaththitho kaaduraa, kantichooputho champutha." But they do send a little frisson of vindication down your spine. Vindication about 'mana Nagarjuna'. Like the scene in which Akhil grabs the collar of a villain and says, "Nenu nee kanna Neech Kutta Kameenani raaa." Or the one where you gulp when Sonu says, "Nenu Sirini chooskuntanu… kaani nuvvu emi ayinaa aa $#*&%kodukulani brathiki undaniyyaku." Or when Akhil flicks a couple of grenades at the 'Mama' mouthing pub-owner-cum-villain (Piyush Mishra) and walks away from the blazing flames saying "Chaau... Nee Abba!"

On that resounding note, I will end the review. Don't miss Super if you are a Nagarjuna fan. Else, do some timepass. Any which way, it can be rewarding. Take your pick.
Share. Save. Connect.
Tweet
SUPER SNAPSHOT

See Super full details
SUPER USER REVIEWS
1 - 13 OF 13 COMMENTS
POSITIVE  |  NEGATIVE |  NEWEST  |  OLDEST  |  MOST HELPFUL  |  LEAST HELPFUL
USER RATING
8.0
210 USERS
Performances
Script
Music/Soundtrack
Visuals
NA
NA
NA
NA
Can watch again - NA
Good for kids - NA
Good for dates - NA
Wait to rent it - NA
Sai on 7th Sep 2007, 3:04pm | Permalink
what the F@#$%.....I read this review just to see how much far can a review writer go aganist someone like Nagarjuna.
This film is a shame and waste of loads o money.And critics atleast do what ur supposed to do.
RATING
2
RAJ RAM on 13th Aug 2005, 9:41am | Permalink
SUPER
RATING
10
Super Suepr on 12th Aug 2005, 1:13pm | Permalink
Hey, Nag, please have hair cut yaar. Childrens are afraid to see u, ur remembering them ghost.
RATING
4
Nag Raj on 5th Aug 2005, 6:31pm | Permalink
The movies is not bad, but i pity Sonu, he is solo in complete movie. Nag took both the heroines. He should have given him atleast one. Nag is too selfish.
RATING
10
Raju JV on 28th Jul 2005, 10:57am | Permalink
The Plot of the movie is new & fresh, why all people want same old wine in a new bottle, see the movie in different angle. story line & story grip is perfect. Next see the action of NAG, Takia excellent & songs oh! SUPER . . . . . . . . . . . . .
RATING
10
Nagarjuna on 26th Jul 2005, 3:28pm | Permalink
Super is Boring right from the start.I think i should file a case on Puri Jagannath in Consumer court.An absolutely Illogical flick
RATING
2
Reality on 23rd Jul 2005, 12:59am | Permalink
Well I really don't know where to start. The only feeling u get when u watch "super" is that u watched an extended music video and it would have been much better to have just seen the songs on TV, coz they are the only part worth watching in the movie. The movie could have been a lot better if atleast someone knew what they were trying to do. The major drawbacks are the direction which was direction-less , screenplay which was shoddy and script which was wafer thin.

The only Plus points of the movie are Nag and Ayesha takia. The choreography of the songs is very stylish and ayesha's movements and expressions are the ones to watch for. The biggest blunder of the movie is the asynchronicity of the events taking place and the overlapping of various diverse characters in totally diferent situations and timeframes.

But It is not fair for a lady to write a review for Nag's movie..

Half the battle is won before the review begins...

ADVERTISEMENT
This page was tagged for
super movie review telugu
super super Nagarjun ka picture super
super telugu movie in hyderabad
Super telugu movie
Super reviews
Follow @fullhyderabad
Follow fullhyd.com on
About Hyderabad
The Hyderabad Community
Improve fullhyd.com
More
Our Other Local Guides
Our other sites
© Copyright 1999-2009 LRR Technologies (Hyderabad), Pvt Ltd. All rights reserved. fullhyd, fullhyderabad, Welcome To The Neighbourhood are trademarks of LRR Technologies (Hyderabad) Pvt Ltd. The textual, graphic, audio and audiovisual material in this site is protected by copyright law. You may not copy, distribute, or use this material except as necessary for your personal, non-commercial use. Any trademarks are the properties of their respective owners. More on Hyderabad, India. Jobs in Hyderabad.