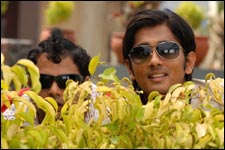 Deepa Garimella / fullhyd.com
EDITOR RATING
5.0
Performances
Script
Music/Soundtrack
Visuals
7.0
6.0
7.0
7.5
Suggestions
Can watch again
No
Good for kids
Yes
Good for dates
Yes
Wait to rent it
No
There are few female faces you can forget from Mani Ratnam's repertoire of films, which is why Oye's heroine triggers off a spate of memories. And while you really wish they were those of watching a certain infant break hearts in an apartment complex, what keeps nudging you throughout the film is the memory of a charmingly simple middle-class medical student being relentlessly wooed on a train by a rich Madhavan.

You try to find Anjali here, you run your brain on a refresh mode right upto the end of the film, but Shamili's likeness to her sister, Shalini, is just too distracting for her to be standing her own.

Oye features the splashy, myopic Uday (Siddharth) falling for the highly conservative and fastidious chudidar-clad, bespectacled Sandhya (Shamili) after watching her write a diary in a pub. She pooh-poohs loan salesmen because she thinks 10 years is short-term, she hates rich people (yes, that's how we reacted, too), she uses numerology to decide if she can be friends with you, and she hates celebrations that are louder than two rose bushes in the process of mating.

She's orthodox but not demure, as the director, who's confused between "gutsy" and "rude", will show you. Anyway, being the moneyed kind, Uday finds ways to be with her (he becomes her paying guest), and tries unsuccessfully to lie his way through her exacting "qualities a husband should possess" list. He does propose to her, but before she can answer, discovers that she's seriously ill, and this changes quite a few things.

For starters, the film just goes ahead and decides to rapidly lose steam. Sandhya's character does a complete 180 degree turn for no apparent reason, and it's not immediately clear whether she too loves him. Uday has to make the girl happy in order to cure her, and soon, our all-new Sandhya is back-packing to Kasi along with baby-sitter Uday, who takes it upon himself to grant every desire that she comes up with.

Oye's courtship, slightly inspired by Ghajini as it is, is entertaining. Also, the film has a few splashes of brilliance, mostly helmed by Siddharth's competence. Like in the scene in which he whips up an Andhra meal out of Calcutta street food, for the lady. Or like when he gifts her a dozen presents on her birthday (a scene which was repeated to a very deflated effect later).

However, it messes up the role of the heroine to a point where you don't care what happens further. There's no real sensitivity here, no explanation as to why she's a loner, and why she changes so radically (even given her illness). As for her wish-list, the granting of some of them is cute, but that of some others is so lame, it embarrasses you to be with yourself. The second half is a huge let-down, with even Sunil's comedy track going awry.

Siddharth is undoubtedly one of the better actors around, and brings a lot of substance to Oye, especially in the first half. He's funny, well-dressed, does not carry that irritated look on his face, and is generally ideal explosive material for hysterically screaming teenage girls.

Shamili is not very expressive, but it's notable that she chooses to cover herself from neck to toe throughout the length of the film - all this, in the navel base that is Tollywood.

Krishnudu plays Uday's buddy, and the role starts off interesting, but it just gets lost later. Tanikella Bharani has a wishy-washy cameo, and Ali has a couple of inane jokes, but the performances are good.

The music is about allright, but Siddharth's opening song (Seheri), the title song, and the sad piece in the end (Nuvvunte Nenunta Prema) are memorable. The film looks great - standard high-budget gloss.

Oye is a largely confusing and pointless film. Watch it if you're still playing guessing games about Siddharth's age, and if you're curious about the Anjali you once knew, but remember that ill people and their stories are best handled by people who get them. Like Mani Ratnam.
Share. Save. Connect.
Tweet
OYE SNAPSHOT

RATING
3
Saradhi on 20th Jul 2009, 5:05pm | Permalink
Hey, this movie is an excellent movie. Mostly, I liked shamili in this movie. She is really beautiful. Siddharth is good as usual. Nothing special. But the sceenplay of the movie is mediocre. Concept is excellent although old. Music excels in this movie. I thought not to watch this tragic movie, but finally it touches the heart. DONT miss this movie. A very nice love story. Not for the wishes he fulfils in the movie, but for noble intentions behind each episode.
The Imtiaz on 14th Jul 2009, 4:48pm | Permalink
Siddharth is too good with Short and Sweet memories attitude. Shamili is quite opposite to that with expectations of 100 years of life. Old story but performances are good. Overall message is Life short and sweet...Always be happy. In other words...Har Pal Yahaan Jeebhar Jiyo... Kal Ho Naa Ho...

Sankar on 8th Jul 2009, 8:30pm | Permalink
Siddharth is the BEST in the movie. Though Shamili is not excellent, suits the character. Producer did a big mistake by hiding her face till the release of the movie. Though it is a predictable story, screenplay is very good. Yuvan Sankar's music and BGM is so nice. It is an entertainer for sure.

RATING
9
Naresh on 4th Jul 2009, 3:11pm | Permalink
I have not yet seen the movie, but i would like to share something with all you guys. I have been waiting for this movie just to see how Shamili look, but to my dissapointment, she is not up to the level that I thought about her. She was cute as a child artist. Now, she is not that cute. It is quite dissapointing.

ADVERTISEMENT
This page was tagged for
oye telugu full movie
Oye telugu movie
Oye reviews
release date
Siddharth, Shamili
Follow @fullhyderabad
Follow fullhyd.com on
About Hyderabad
The Hyderabad Community
Improve fullhyd.com
More
Our Other Local Guides
Our other sites
© Copyright 1999-2009 LRR Technologies (Hyderabad), Pvt Ltd. All rights reserved. fullhyd, fullhyderabad, Welcome To The Neighbourhood are trademarks of LRR Technologies (Hyderabad) Pvt Ltd. The textual, graphic, audio and audiovisual material in this site is protected by copyright law. You may not copy, distribute, or use this material except as necessary for your personal, non-commercial use. Any trademarks are the properties of their respective owners. More on Hyderabad, India. Jobs in Hyderabad.