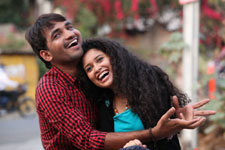 Kritika Deval / fullhyd.com
EDITOR RATING
4.5
Performances
Script
Music/Soundtrack
Visuals
6.0
3.0
6.0
6.5
Suggestions
Can watch again
No
Good for kids
No
Good for dates
No
Wait to rent it
No
The faith our filmmakers put in love is an amazing, flexible, all-encompassing faith. It's a faith they turn to when they hit a plot point they can't explain or a behavior that doesn't seem to fit the character. They use it to shoehorn songs that don't seem like they belong there, to justify all manners of joys and utterly inexplicable suffering, and even, when creativity fails them (which it does often - so capricious, no?), to create twists that can move along a story that seems utterly unwilling to move.

Such is their faith in love that "Pora Pove" was deemed a worthy story to bestow upon it the efforts of a decent director, lovely camera-work, and a thoroughly enjoyable soundtrack. Is it really, though? IS IT??

First, let's take a look at the plot. Vikas (Karan) and Sri Chaitanya (Soumya Sukumar) are both products of schools where they were both denied the presence of the opposite gender. So, when they meet in college, they aren't just extremely susceptible to the ensuing romance, but also have something to talk about.

At first, it's all fun and games with lots of banter, some of which might even be called good. And then Chaitu starts being really vehement about her hatred of "second hand" stuff, harbinging (harbingering?) untold amounts of melodrama. Tragedy hits and Chaitu finds out that Vikas had spent a while hitting on two of her friends before moving on to her. Not only disgusted that Vikas is not as pure as she thought him to be, but also afraid that he only settled for her after things didn't work out with the others, Chaitu says "Pora!" to Vivek. Vivek, much to the shock of nobody, replies "Pove!" And thus ends the first half.

It is now upto Vivek to re-woo Chaitu and upto us to weather tears, clichéd lines and a confirmation of the sneaking suspicion that began quite early on that this is not the breezy college romance we were looking forward to.

If you're looking for logic, you're looking at the wrong screen. What you will find instead are copious amounts of hackery and melodrama, backed by surprisingly good music. Music director Yajamanya not only has a way awesome name but can also make way awesome music, whether it be the skillfully wrought background track or songs that stick around in your head (we miss that feeling from Telugu films).

The performances are as energetic and plausible as the screenplay, which is to say not at all. Soumya Sukumar seems so far out of Karan's league that we are genuinely surprised they didn't think of flipping the script over. A lot of scenes are creatively composed, and you can see glimpses of what could be a fairly talented director from time to time. And the editing team could easily have cut the film down to half the time, and the movie would've been better off for it.

What Pora Pove does work as is a calling card, or maybe an annoying free version of an app that seems to have great features in the paid version. But, in this case, the free version also seems to cost money, so maybe give it a miss?
Share. Save. Connect.
Tweet
PORA POVE SNAPSHOT 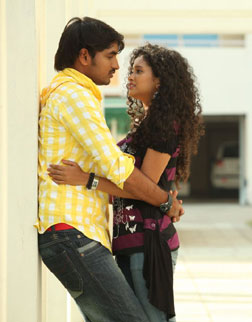 ADVERTISEMENT
This page was tagged for
Pora Pove telugu movie
Pora Pove reviews
release date
Karan, Soumya Sukumar
theatres list
Follow @fullhyderabad
Follow fullhyd.com on
About Hyderabad
The Hyderabad Community
Improve fullhyd.com
More
Our Other Local Guides
Our other sites
© Copyright 1999-2009 LRR Technologies (Hyderabad), Pvt Ltd. All rights reserved. fullhyd, fullhyderabad, Welcome To The Neighbourhood are trademarks of LRR Technologies (Hyderabad) Pvt Ltd. The textual, graphic, audio and audiovisual material in this site is protected by copyright law. You may not copy, distribute, or use this material except as necessary for your personal, non-commercial use. Any trademarks are the properties of their respective owners. More on Hyderabad, India. Jobs in Hyderabad.