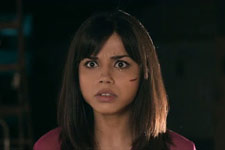 Nupur Barua / fullhyd.com
EDITOR RATING
5.0
Performances
Script
Music/Soundtrack
Visuals
5.0
6.0
7.0
7.0
Suggestions
Can watch again
No
Good for kids
No
Good for dates
Yes
Wait to rent it
Yes
Vikram Bhatt, of 1920, the Raaz series, and Haunted fame, said in a recent interview that he wanted to present a horror film that (a) does not have stars (since they distract the audience from scares and thrills), and (b) is not a romance, but a story that revolves around the concept of (Hollywood) horror.

To give him credit, Horror Story (you could not have asked for a blunter, in-your-face title for a film of this genre), manages to scare and creep you out, mostly, without any ludicrous costumes or plots. On the flip side, for an audience that feeds on Hollywood horrors, there is nothing extraordinarily innovative or new in the movie.

Now for the plot. After a few years of doing their own thing, 7 friends reunite to celebrate a special occasion. One of them will soon pursue further studies and a career abroad, and this may be the last time that all seven of them will get together for a while.

As the night progresses and the drinking gets more intense, they decide to make their last night more exciting. The television set in the pub flashes a story about a 5-star hotel, believed to be haunted, that will now be shut down for good. The inebriated group of friends decide, on a whim, to check out the place, and giggle their way into the gates of the abandoned hotel.

Not all of them are believers in ghosts or other paranormal activities, but the sight of the eerie building sends shivers down their spine. In an attempt to keep up their bravado, especially with each other, none of them admits that entering the building may be a bad idea.

One by one, however, they crack under the pressure of an unseen force, which clearly exists, even as they try to acquire survival skills to get out of this now pointless adventure unscathed. Trapped in a building that consorts with the devil himself, the seven young friends realise that this may actually be their last night together, not for a while, but forever.

While the concept in itself is an exciting one, the execution of the story leaves much to be desired. Thankfully, the film does not run for more than an hour and a half, and therefore, tedious it is not - at least, not in terms of spooks and scares.

The screenplay begins well, but soon gets distracted, with predictable, clich?d tricks of the horror film trade. The history of the haunting is unremarkable, as is the reason behind the suicide of the hotel owner (Room 3046 is the epicentre of all events). The solution - either to run away or solve the problem - is a bit of an anticlimax, after all the violence that precedes it.

And a young girl singing "Ring-a-ring-a-roses" is reminiscent of many movies in the genre, especially from Hollywood, and therefore not that creepy any more (although it is supposed to be a rhyme inspired by the countless deaths during the Great Plague of the 17th century).

The dialogues are slightly stilted and not very subtle - they almost tell you what you are seeing, and that can be a bit annoying if you are trying your best to get involved enough to jump out of your seat once in a while.

The actors, all unknown faces, attempt their best, but they somehow contribute to the downfall of the screenplay execution with their exaggerated histrionics. Karan Kundra and Radhika Menon are the only two who create an impression. Together, the 7 actors manage a convincing chemistry, but their acting skills leave much to be desired. The supporting actors are credible in their roles.

The lack of music, songs and unnecessary noise contributes to making this movie an uncluttered horror fest - almost. What enhances the spook factor, more than the sound design, is the above-average lighting and cinematography. Again, that is let down by some conventional horror make-up and action. The editing is crisp, though.

It is a given that the scariest movies come from Japan and Korea, and Horror Story seems like a tribute to them. While the inspiration is clear, a few rotten elements spoil the entire film, which could have otherwise been a refreshing change from the usual fare in this genre.

For the hardened horror buff, this film may seem amateurish, but for the ones who are easily scared, here is a warning - leave your weak heart at home. A sequel seems to be in the pipeline, and we can only hope that the makers will concentrate on originality the second time.
Share. Save. Connect.
Tweet
HORROR STORY SNAPSHOT 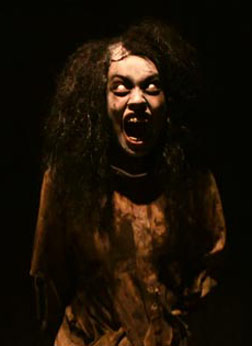 ADVERTISEMENT
This page was tagged for
Horror Story hindi movie
Horror Story reviews
release date
Karan Kundra, Ravish Desai
theatres list
Follow @fullhyderabad
Follow fullhyd.com on
About Hyderabad
The Hyderabad Community
Improve fullhyd.com
More
Our Other Local Guides
Our other sites
© Copyright 1999-2009 LRR Technologies (Hyderabad), Pvt Ltd. All rights reserved. fullhyd, fullhyderabad, Welcome To The Neighbourhood are trademarks of LRR Technologies (Hyderabad) Pvt Ltd. The textual, graphic, audio and audiovisual material in this site is protected by copyright law. You may not copy, distribute, or use this material except as necessary for your personal, non-commercial use. Any trademarks are the properties of their respective owners. More on Hyderabad, India. Jobs in Hyderabad.