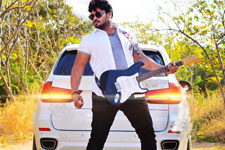 Swaroop Thotada / fullhyd.com
EDITOR RATING
4.0
Performances
Script
Music/Soundtrack
Visuals
5.0
3.0
5.0
5.0
Suggestions
Can watch again
No
Good for kids
Yes
Good for dates
No
Wait for OTT
Yes
Gunturodu takes place in a world where if you are a star or star-kid and you happen to hit someone, they won't just topple and trip or just lose a tooth. They gymnast all through their way to an electric pole and spur sparks, or shatter a fake wall to smithereens. If they can't find either nearby, they just land in slow motion after bouncing twice or thrice and raise up plenty of dust. You can safely assume that these talented stuntmen can revolve around the hero like planets in a solar system but the sensible director sir shouts cut before such bizarre feats can distance the film from reality.

In that world, all it takes for you to woo chicks is to sport floral printed shirts, pout Facebook poetry and window-dress your joblessness in a way that matches their misguided understanding of self-esteem. (Rumour has it that it holds true in our world as well, but this writer doesn't have enough experience in that area and you have to validate that for yourself. Bear in mind that these stunts are to be performed only by experts.) And all that matter in a relationship are whether you are as honest as Ashish Vidyarthi's daughter in that Kinley Mineral Water commercial and whether you have the street-smarts to pull off poorly conceived mind games whose outcomes you can spot from a mile. Things like having a job or being productive are left to losers.

Kanna (Manchu Manoj) is a spoilt youth brimming with energy all the time, and having nothing better to do, directs it towards whoever is unfortunate enough to catch his eye doing evil. His footloose boorishness ends him up in fights all the time, much to the worry and annoyance of his meek and doting father (Rajendra Prasad).

He develops the hots for Amrutha (Pragya Jaiswal) as soon as he sees her. After a series of textbook Telugu movie stalking, she eventually falls for him. Meanwhile he locks horns with Satya (Sampath Raj), an arrogant and egomaniacal criminal lawyer whose evil knows no bounds. And it turns out that he is none other than Amrutha's brother.

Gunturodu obviously has no great ambitions. It merely attempts at being a passable entertainer, and has all the ingredients at its disposal. However it does not do a terrific job at that. It incorporates humour and has an appropriately lighthearted approach to emotional scenes, but it all doesn't quite add up, even with an entertaining performer like Manchu Manoj at the helm. The plot is too silly for you to take it seriously, but the film is not clever enough to realize that it can do better as an over-the-top parody of its genre. Nor is the fun the ROTFL kind. The jokes just tickle you occasionally.

Why aren't these films smart enough to realize that they are better off shruging off the lame attempts at melodrama? Take for instance the scene where Kanna proposes to Amrutha and she accepts it. Since it is a plot development, it is fine for the scene to linger until that point, but she then goes on explaining why she fell for him, and that's the lamest reason you will ever hear for someone to fall in love. Why does she need to explain it? It's not that we are curious, or that anything she can come up with will actually work.

Manchu Manoj clearly deserves a better director and a better script. This man has the right "comedy timing" and "mass appeal" to shoulder a better entertainer. Pragya Jaiswal should tone down the relentless exhilaration on her face. Maybe she is overcompensating for her mature face, but it is annoying. The fights, though over-the-top, are stylishly conceived, and will surely appeal to the target audience. The songs are easy on the ears but none of them sticks in your brain after you leave the theatre.

Manchu Manoj is the actor who earlier showed keenness in bringing innovative scripts to the screen, like Nenu Meeku Telusa and Prayanam. They unfortunately didn't click, and his funny-yet-ferocious act worked briefly and he's slowly descended into eccentricity and over-acting. We can only hope he bounces back.
Share. Save. Connect.
Tweet
GUNTURODU SNAPSHOT 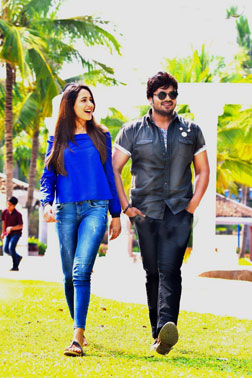 Because Telugu Cinema Kamma minds cannot think any better. It's genetic.....
Josh on 4th Mar 2017, 7:42pm | Permalink
Yeah, absolutely. Like the rest of us are Scorcese's soul mates. Come on, man.
Chinna Babu on 4th Mar 2017, 9:43pm | Permalink
Did you notice 2 dislikes and 1 like for your comment??? I wonder who gave those.....by the way, I very much meant what I said about a film industry packed to the last inch with the community I mentioned, from the sixties till date. There are only two ways that can be explained; either that caste is the 'Scorcese's Soul mates' or they promoted themselves or promoted who promoted them. The enormous creative damage done by their makers and 'their audience' is very obvious, if only one is not blind, so much so that their humongous bias has made a lousy cheap patchwork of visuals like 1-Nenokkadine, the third highest rated thriller on IMDB just because the fans of a kamma superstar thought he had done a 'different' movie..... amazing....
Josh on 5th Mar 2017, 3:44am | Permalink
Chinna Babu, the trouble with your comment isn't so much the factual accuracy as much as that it perpetuates caste thinking. Thanks to you, I now have a fair idea of the castes of a lot of film personalities. And I'm pretty certain that the mega family and Prabhas do not belong to the caste you mention and they are involved in equally terrible films anyway.

If your comment had been simply about caste domination and the associated problems resulting in bad films, I'd have whole-heartedly uttered my amen. That still discusses the root problem without perpetuating other, more serious, problems.

ADVERTISEMENT
This page was tagged for
Gunturodu telugu movie
Gunturodu reviews
release date
Manchu Manoj Kumar, Pragya Jaiswal
theatres list
Follow @fullhyderabad
Follow fullhyd.com on
About Hyderabad
The Hyderabad Community
Improve fullhyd.com
More
Our Other Local Guides
Our other sites
© Copyright 1999-2009 LRR Technologies (Hyderabad), Pvt Ltd. All rights reserved. fullhyd, fullhyderabad, Welcome To The Neighbourhood are trademarks of LRR Technologies (Hyderabad) Pvt Ltd. The textual, graphic, audio and audiovisual material in this site is protected by copyright law. You may not copy, distribute, or use this material except as necessary for your personal, non-commercial use. Any trademarks are the properties of their respective owners. More on Hyderabad, India. Jobs in Hyderabad.