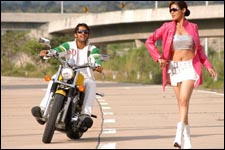 Priyanka Pulla / fullhyd.com
EDITOR RATING
3.0
Performances
Script
Music/Soundtrack
Visuals
NA
NA
NA
NA
Suggestions
Can watch again
NA
Good for kids
NA
Good for dates
NA
Wait for OTT
NA
Takkari, much like Maggi noodles, positively reeks of formula. But then, so do so many other Tollywood movies. Is there a way, then, to review Takkari other than stating the obvious? Nope. Because Takkari is a rather, er, 'obvious' movie.

The tale features spurned hero Tirupati (Nitin) who wins back his lover, and dumb heroine Priya (Sada) who emerges from hiding only when she is needed to perform her duties, such as undulating her spine in backless cholis and thrusting her chest against the camera, in songs that are perfectly evenly spaced and dished out medicinally every half an hour like a dose of castor oil. You only wish it was Valium instead. Or pesticide.

The villain Guru (Sayaji Shinde), like a video game character who cannot move through certain walls, is never allowed to enter the realms of intelligent thinking. Comedy, too, pops in and out cyclically with Venu Madhav and Ali gatecrashing without introductions. In fact, every element of the movie is so disconnected, it seems like Amma Rajasekhar outsourced it all to various specialists and then just plugged and played.

The story meant to connect this chaos is that Tirupati is a bit of a prodigal son, a wastrel who will sit around doing nothing unless his dad (Chandramohan) lends him at least Rs. 1 lakh to start his own business. Which the latter obviously refuses to do.

Tirupati also obviously proceeds to fall in love with Priya (Sada) when she appears in his vicinity preening and tossing her hair around. She obviously has a villain brother Guru (Shinde), who is overprotective of her and will obviously not see her married to a loser like Tirupati. He offers Rs. 25 lakh to Tirupati to leave Priya.

In what is supposed to be the differentiating twist to the movie, but somehow emerges as painfully obvious, Takkari accepts the money and leaves Priya. And cleverly builds himself a business empire so he can win her back from Guru.

Nitin's acting is pretty ordinary, except that he smiles a lot and makes you think he might be better off playing an angel or a cherub, or at least Lord Hanuman's well-tempered disciple in Sri Anjaneyam. Except, that movie bombed. It would help him to introduce a serious side to the personality he projects. Tollywood moviegoers like the angry young man, and Nitin almost always comes across as the happy young schoolboy.

Sada is quite forgettable, and Sayaji Shinde proves his dependability in playing villain - but who wants a dependable villain?

As for the music track, well, all we can say of Takkari is that it has a music track like most other movies. There's wanton use of reduplicative, nonsense lyrics, and you might just as well set James Joyce's Finnegan Wake to a tune if you wanted music that you could not make head or tail off. Why bother with Takkari?

Takkari treads the path of formula so carefully, that just might be its saving grace, or just as easily, its downfall. No one can tell. After all, some like Maggi Noodles, some detest it, and some like it on some days.

Please get the name of actors right. It is Prakash Rai (like Aishwarya Rai-you don't get her name wrong, do you?) - NOT Prakash Raj.

Do some justice to this good actor.

ADVERTISEMENT
This page was tagged for
takkari movie telugu
Takkari telugu movie
Takkari reviews
release date
Nitin, Sada
Follow @fullhyderabad
Follow fullhyd.com on
About Hyderabad
The Hyderabad Community
Improve fullhyd.com
More
Our Other Local Guides
Our other sites
© Copyright 1999-2009 LRR Technologies (Hyderabad), Pvt Ltd. All rights reserved. fullhyd, fullhyderabad, Welcome To The Neighbourhood are trademarks of LRR Technologies (Hyderabad) Pvt Ltd. The textual, graphic, audio and audiovisual material in this site is protected by copyright law. You may not copy, distribute, or use this material except as necessary for your personal, non-commercial use. Any trademarks are the properties of their respective owners. More on Hyderabad, India. Jobs in Hyderabad.