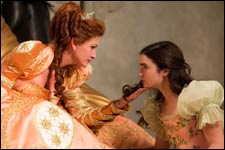 Samrat Sharma / fullhyd.com
EDITOR RATING
6.5
Performances
Script
Music/Soundtrack
Visuals
6.5
4.5
6.0
8.0
Suggestions
Can watch again
Yes
Good for kids
Yes
Good for dates
Yes
Wait for OTT
Yes
Tarsem Singh is one of the most interesting directors working in Hollywood today, making films that revel in their twisted version of baroque imagery, and dealing with the nature of storytelling, imagination and fantasy. Mirror Mirror, the first of two Snow White films this year, takes Singh's penchant for these themes to a curiously funny and comic place, but not always with great success.

The humour in the film is often sardonic and self-aware, a Shrek sequel writ on the director's glorious canvas. It doesn't always work, and often, eye-rolling jokes and tropes find their place among a few enjoyable ones.

Written to be modern, and in keeping with the wave of bucking trends becoming the new trend, the film is constantly trying to wink and flourish at the same time. It's never meta enough, but the tone is weirdly irreverent and slavish at the same time.

On the one hand, the prince charming (Armie Hammer) is a good-looking goof, and the 7 dwarves are oppressed citizenry full of wit, character and nobility, and Snow White (Lily Collins) is a lass good with a sword and very capable in a fight. Casting Lily Collins is meant to remind us of a Disney princess, as her huge eyes and huger dresses constantly remind us in the first half.

On the other hand, the film begins in a small recap done with a sarcastic and completely-in-character evil Queen. Julia Roberts plays it straight, the scheming woman who has no patience for goofs or for the fact that she may not be the prettiest. It reeks of studio-meddling - it is a film that is peppered with characters that are written against type: full-bodied role reversals in place, and a story that is as trite as they come.

Mirror Mirror is often slow-paced and tiresome, and the wit and humour fail as many times as they succeed. Yet, Tarsem's unique take on the visuals of this fairy take world are consistently and constantly great-looking. Even when the heroism feels unearned, or the humour seems flat, and the plot sags under Nathan Lane's irritating comedy, the film is a gorgeous fantasy full of imaginative creature design and set design, with colours popping out to embrace the wildness in Tarsem's heart. Next time, we'd love to see him go all out and embrace it all back, because we have seen The Fall, and we want that in a traditional fairy tale.
Share. Save. Connect.
Tweet
MIRROR MIRROR SNAPSHOT 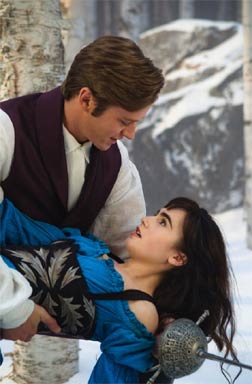 ADVERTISEMENT
This page was tagged for
Mirror Mirror english movie
Mirror Mirror reviews
release date
Julia Roberts, Lily Collins
theatres list
Follow @fullhyderabad
Follow fullhyd.com on
About Hyderabad
The Hyderabad Community
Improve fullhyd.com
More
Our Other Local Guides
Our other sites
© Copyright 1999-2009 LRR Technologies (Hyderabad), Pvt Ltd. All rights reserved. fullhyd, fullhyderabad, Welcome To The Neighbourhood are trademarks of LRR Technologies (Hyderabad) Pvt Ltd. The textual, graphic, audio and audiovisual material in this site is protected by copyright law. You may not copy, distribute, or use this material except as necessary for your personal, non-commercial use. Any trademarks are the properties of their respective owners. More on Hyderabad, India. Jobs in Hyderabad.