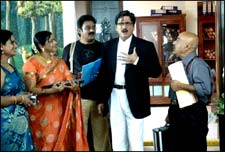 Deepa Garimella / fullhyd.com
EDITOR RATING
2.0
Performances
Script
Music/Soundtrack
Visuals
5.0
2.0
2.0
3.0
Suggestions
Can watch again
No
Good for kids
No
Good for dates
No
Wait to rent it
No
Easily, a "no Rajendra Prasad" is much more tolerable than a Rajendra Prasad who is used to sell films that have no redeeming features at all. Gudu Gudu Gunjam is amongst the most amateurishly-made flicks this season; the kind at the end of which you wonder what the hell happened out there for two whole hours.

The film, firstly, has a story that isn't quite all there. Parthu (Parthu), the son of Ram (Rajendra Prasad), a lawyer, heads off to Bangkok to run away from his parents. There, he falls in love with Meenakshi (Aarti Puri), and tells his parents that he wants to marry her.

Parthu's mother (Sitara) is brought to Bangkok to talk to the girl's aunt Malliswari (Kasturi). Everything seems fine until Malliswari demands that she get to marry Ram if her niece is to marry Parthu. This twist is supposedly the start of an "intriguing" Gudu Gudu Gunjam game, and the film wallows in its newly-found treasure, oblivious to the fact that the shoddy editing is destroying any semblance of logic in there.

Meanwhile, Telangana Sakuntala plays an aggressive aunt to a girl who Parthu has impulsively kissed on the road. Then, there's Suman who plays Ram's wife's brother, brought in to intensify the damage caused by casting Rajendra Prasad - lend the film some dignity and then doubly dash all hopes of any such thing by dragging it through the gutter.

After much pointlessness in terms of Parthu's romance and a couple of comedy tracks that involve Brahmanandam, Venu Madhav and Krishna Bhagawan, we are taken through a flashback. Apparently, 20 years ago, Ram's marriage to his wife was forced by his brother-in-law (Suman), while he actually was in love with Malliswari.

Hence, this whole plot of Malliswari coveting the much-married Ram was a calculated ploy devised by Ram to get him together with his ancient love. Ram is shown to be a hero of sorts since all he wanted was to not destroy the life of the woman he was forced to reject 20 years ago.

Setting aside the inane plot, Gudu Gudu Gunjam fails primarily because it is a shoddily made flick. Scenes are haphazardly chopped in the middle of dialogues, there's no continuity in any single line of thought, and the dubbing is atrocious. It's a low-budget film, too, despite all the Bangkok hoopla.

Well, as for the humour, the movie has the IQ of a hair-clip, and the comedians in the cast don't even try to breathe life into their lines. Come to think of it, there rarely are any lines that manage to bring out a chuckle.

The performances are as flat as they can get. Rajendra Prasad is as well-utilized as a garlanded photograph of a yesteryear star on the wall, and he isn't even given leeway to make an effort to set anything right. The hero and the heroine seem to have been brought into the cast against their liking.

A noisy soundtrack with songs on the other end of the melody spectrum enhances the Gudu Gudu Gunjam experience.

In sum, we doubt if you'd watch this movie even if you starred in it. Stay away.
Share. Save. Connect.
Tweet
GUDU GUDU GUNJAM SNAPSHOT

ADVERTISEMENT
This page was tagged for
Gudu Gudu Gunjam telugu movie
Gudu Gudu Gunjam reviews
release date
Rajendra Prasad, Parthu
theatres list
Follow @fullhyderabad
Follow fullhyd.com on
About Hyderabad
The Hyderabad Community
Improve fullhyd.com
More
Our Other Local Guides
Our other sites
© Copyright 1999-2009 LRR Technologies (Hyderabad), Pvt Ltd. All rights reserved. fullhyd, fullhyderabad, Welcome To The Neighbourhood are trademarks of LRR Technologies (Hyderabad) Pvt Ltd. The textual, graphic, audio and audiovisual material in this site is protected by copyright law. You may not copy, distribute, or use this material except as necessary for your personal, non-commercial use. Any trademarks are the properties of their respective owners. More on Hyderabad, India. Jobs in Hyderabad.