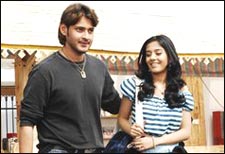 EDITOR RATING
6.0
Performances
Script
Music/Soundtrack
Visuals
NA
NA
NA
NA
Suggestions
Can watch again
NA
Good for kids
NA
Good for dates
NA
Wait to rent it
NA
Most experienced Tollywood directors will tell you that there are only 2-3 scripts on the menu, really. It's how you cook them that matters - it's foolhardy to come up with new items.

Which is why most experienced Tollywood directors are a public calamity. And the strike rate in Tollywood averages 5 out of 150 every year.

Also, Shahrukh, Aamir, Hrithik and Salman did not make a single formula movie in 3 years now. And Saif, Akshay and Abhishek. And Ajay, Sanjay and John. And, heck, Shreyas Talpade.

And none of them beats up a dozen goons single-handedly in movie after movie, showcasing gore so explicitly that the film warrants an A rating.

Indeed, Tollywood directors must really think we are all an amorphous bunch of Neanderthals.

But that's just an aside, really. Let's get to the review at hand.

Athidhi betrays its shallow core right at the end of the first introductory fight, when Mahesh breaks into a pointless formula song when you are wound up with anticipation (and that's not to say that the introduction shows great creativity either). And that sets the tone for a movie that seems more to go through the motions than showcase gripping narration.

Indeed, Athidhi is just another formula movie, and an average one at that - it uses Mahesh as a prop rather than as a tool. No, the movie is nothing like what you thought it might be from its name - nothing like Athadu in theme, that is. It is more about slick presentation than soul.

Athidhi (Mahesh, named ridiculously) gets convicted at the age of 7 in the murder of a couple, actually committed by a psychopath Kaiser. When he is released 13 years later, he makes it his life's mission to take on goons and to kill Kaiser, and in the process, runs into Amrita (Amrita Rao), the daughter of the couple, who falls in love with him when he saves her from some goons.

Amrita is heir to crores of rupees, and when he realizes that her life is in danger because of this, Athidhi comes to her home to stay with her to be able to rescue her. However, his identity is revealed in a police investigation (Amrita's uncle is the home minister), and Amrita hates him for being the killer of her parents. In the meantime, it surfaces that it is Kaiser out to kill her.

If it were not for Mahesh's star presence, Athidhi would be a very unremarkable movie. Unfortunately, that's almost the case even with Mahesh in it.

Firstly, there's no easy flow to the film - it appears to try to be another Pokiri for a good part in the first half, with all the violence and gang wars, interspersed unharmoniously with a courtship. Then there are inanities like Mahesh slapping Amrita, and too many coincidences, which you'd hardly expect to see in a properly thought-out film.

The second half has a bigger problem - it seems to plod on and on (the film lasts almost 3 hours). It also seems to borrow plenty from various other films from time to time - like Ek Ajnabee / Man On Fire (the kidnapping of Amrita) and Raghavan / Braveheart (the climax). And sometimes you can lose track of what's happening.

For example, just what was it about Inspector Ajay Shastri getting tied up by Athidhi and confessing? The flashback of the plotting to kill Amrita is also confusing. And the way Kaiser's identity is revealed is a big letdown after all the hype. Plus, what is that whole Dhoolpet thing about? It all points to a lack of a rigorous intellectual effort before the first shot was clapped, and perhaps choppy editing to cut the length. Plus, the songs seem to pop up rather unwelcomely.

Mahesh saves the film to an extent with his star appeal and glamor quotient, and Amrita with her freshness and chirpy performance. The movie looks sleek - arguably the only real plus - with the exception of some sorry graphics in the climax fight. The music by Mani Sharma is unlikely to set any charts on fire, though a couple of songs are hummable.

After Athadu and Pokiri, people go to a Mahesh movie expecting something different. Filmmakers, however, seem to be going to him smelling merely quick money. Athidhi is an average film with too much gore and too little substance, and whether you wish to see it depends on your love for Mahesh and your other options.
Share. Save. Connect.
Tweet
ATHIDHI SNAPSHOT

Tell the sotry some one who think better than you and act, thatb is good for you and your position.

RATING
2
Merugyna Samajam on 23rd Oct 2007, 3:58am | Permalink
ayya baaaaaaabooooooooooooooi. nisanga naku mind block ayyindi. mahesh face old gaa anipinchindi because of close ups. villianism is pathetic, cruel, vommiting. mahesh must stop this monotonous acting pleaseeeeeeeee
RATING
2
Venkatesh Bala on 22nd Oct 2007, 7:13pm | Permalink
Last 25minitese is very bad
RATING
2
Not "Speedy" on 22nd Oct 2007, 7:08am | Permalink
hello MR.Speedy II which village ru from??haha....what d hell is caste doing here??dont ever try to bring out such idiotic concepts... people'll laugh at u!!!grow up mr we are not in BC'c age....
RATING
8
Sri Sainath on 21st Oct 2007, 11:15pm | Permalink
Hey Mr.Speedy-II ..y r u trying to bring caste ..films r not made by only one community people . every one has their own share . Try to respect other religion, caste , creed . Try to respect every one and treat every human being as one ..

ADVERTISEMENT
This page was tagged for
Anukooni athidi Telugu sex stories
Athidhi telugu movie
Athidhi reviews
release date
Mahesh Babu, Amrita Rao
Follow @fullhyderabad
Follow fullhyd.com on
About Hyderabad
The Hyderabad Community
Improve fullhyd.com
More
Our Other Local Guides
Our other sites
© Copyright 1999-2009 LRR Technologies (Hyderabad), Pvt Ltd. All rights reserved. fullhyd, fullhyderabad, Welcome To The Neighbourhood are trademarks of LRR Technologies (Hyderabad) Pvt Ltd. The textual, graphic, audio and audiovisual material in this site is protected by copyright law. You may not copy, distribute, or use this material except as necessary for your personal, non-commercial use. Any trademarks are the properties of their respective owners. More on Hyderabad, India. Jobs in Hyderabad.