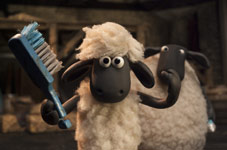 Josh / fullhyd.com
EDITOR RATING
8.0
Performances
Script
Music/Soundtrack
Visuals
8.0
8.0
7.0
9.0
Suggestions
Can watch again
Yes
Good for kids
Yes
Good for dates
Yes
Wait to rent it
No
We have often argued that clichés aren't a bad thing. Now we have proof. Shaun The Sheep, adapted from a beloved TV series, is replete with clichés. And yet, you'll find not a single problem with this delightful kids' movie which manages to engage and entertain the accompanying adults, too.

There is a hero Shaun (Justin Fletcher), who is a dreamy, enterprising, and resourceful ...er, sheep. He and his flock are watched over by Bitzer, the farmdog (John Sparkles) who assists the farmer, the master of the farm (also played by John Sparkles). The daily schedule is hung on the wall, and it barely ever changes. Each day passes by without being much different from the other.

As tedium sets into their lives, Shaun hatches brilliant plan to get a day off. Things go awry when a stopping wedge gives away causing its caravan and the farmer in it to roll into "The Big City" (that's the name of the city!).

The farm is not its old self without the farmer (who is now in an asylum on account of memory loss) and the faithful Bitzer who runs after him only to end up clueless in the city. Shaun, like most heroes in remorse, takes it upon himself to rectify his mistake. He sets off to the big city, and unbeknownst to him his flock follows, setting the stage for some side-splitting hilarity ensuing from the antics of these rural sheep in the dizzying expanses of urban landscape.

Things aren't hunky dory, though, with the city's Animal Containment department hiring a ruthless expert who hates seeing animals out in the open. This is the super villain whose speciality is the ability to find and contain stray animals. He is after the sheep, and they have to find their master while evading this malefactor.

That's the thing about good formula cinema. Nobody's questioning you about how ridiculous the whole thing sounds. The only thing we, the sincere and returning audience, ask is how well are the stakes built and how engaging is the resolution. Shaun The Sheep sensitizes you to everything these animals are feeling. The desire for freedom, the remorse for messing up, the sadness of facing a family member who doesn't recognise you, the fear of being caught by the bad guys, the new friend who feels left out - every single one of these emotions comes alive.

What of disbelief, you ask? You'll have abandoned it in the thirtieth second of this animated chunk of joy.

As we said, the clichés and old tropes abound. The supernaturally capable hero (Shaun makes hyper-realistic drawings among other things). The evil villain. The friends who won't leave you. The importance of family. Loyalty. The amnesia and the recovery from it through a family song. The child who won't sleep until the hero croons a lullaby. The piece of information (in this case, a medical report) which literally falls from the sky. They're all there.

But nobody's complaining. Because, these clichés all strengthen the narrative rather than supplant it. The screenplay is rich with humorous and well-thought detail. The stop motion animation and the tremendous detailing make the visuals glorious (we hear the movie was animated over six years - with each animator producing about two seconds of footage per day). The slapstick is splendid and wonderfully imagined, and you only want more at the end of it. And the music works very well for the effect, too.

The characterisations are also carefully crafted. The villain's loneliness and sense of being underappreciated are often touched upon (and just subtle enough to let the kids gloss over it while the adults register the nuance). The pigs, the lamb and the contained stray animals in the pound (the dog which stares angrily is a hoot) are all given enough detailing - all for an ostensibly kids' film.

This is perhaps what happens when people want to make good cinema instead of just wanting to capitalise on the brand. Yes, we are talking about The Minions here. The audiences' love for The Minions seemed to have been taken for granted. Aardman Animations, however, does no such indignity, and comes up with a product that regales the child, amuses the grownup, and reinstitutes faith in the film lover, irrespective of their age. 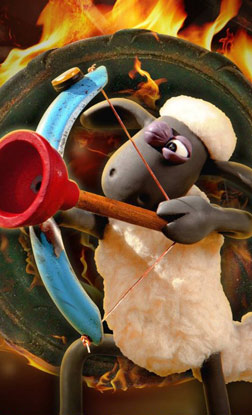 ADVERTISEMENT
This page was tagged for
Shaun The Sheep english movie
Shaun The Sheep reviews
release date
John Sparkes, Justin Fletcher
theatres list
Follow @fullhyderabad
Follow fullhyd.com on
About Hyderabad
The Hyderabad Community
Improve fullhyd.com
More
Our Other Local Guides
Our other sites
© Copyright 1999-2009 LRR Technologies (Hyderabad), Pvt Ltd. All rights reserved. fullhyd, fullhyderabad, Welcome To The Neighbourhood are trademarks of LRR Technologies (Hyderabad) Pvt Ltd. The textual, graphic, audio and audiovisual material in this site is protected by copyright law. You may not copy, distribute, or use this material except as necessary for your personal, non-commercial use. Any trademarks are the properties of their respective owners. More on Hyderabad, India. Jobs in Hyderabad.