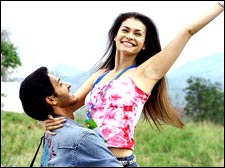 Samrat Sharma / fullhyd.com
EDITOR RATING
5.0
Performances
Script
Music/Soundtrack
Visuals
NA
NA
NA
NA
Suggestions
Can watch again
NA
Good for kids
NA
Good for dates
NA
Wait for OTT
NA
It has been 10 years since Nagesh Kukunoor's Hyderabad Blues hit everyone when no one was looking, and became the defining film for sleeper hits since. Fortunately or unfortunately, it also became the defining film of Nagesh's career. Despite the extremely polished Iqbal, and the effectiveness of his dramas like 3 Deewarein, people always mention Hyderabad Blues and Nagesh Kukunoor in the same breath.

Scant surprise then, he tries to break free of all shackles and 'sensible drama' film tags that the media keeps pushing onto him by attempting a thorough masala film. Fans will remember the similar-in-intention Bollywood Calling from 2001, which, though loose on directorial finesse, had a charm all its own. With a higher budget and some very accomplished shot selection on part of the director, also comes the neglect of the script.

Yes, the very bastion that held forth strongly in every film that Nagesh made has been a victim of the Bollywood grind. Regurgitated, masticated and spit back on the screen for us. I sat there in amazement, wincing at every bad piece of dialog, every unfunny piece of dialog, waiting to wake up from this bad dream and find that Nagesh was just playing with us, that he has a better script that he made a far better film out of.

But all I got for my wishful thinking was headache and a strange melancholy in watching a fiercely original director finally become completely Bollywood-ized. I don't know if this 'quickie' from Mukta Searchlight will break any banks by the end of the week, but they have broken a perfectly accomplished screenwriter.

Shankar (Talpade) is a simple cook at the household of Khan Seth (Shah). Khan Seth is a dreaded don, and when a large sum of money ends up at his home, Shankar gets tempted enough to steal it and run. Shankar needs to save the money as well as himself though, so he joins a team of doctors headed to Thailand for relief work.

As is given in slapstick caper films, he loses the money promptly, and finds the girl. He bumps into Jasmine (Christianson), a volunteer at the relief camp by day and masseuse (of that kind) by night. She is Thai, and that makes it difficult to communicate with her, though he feels completely besotted. He poses as a doctor, and she gets sucked in the madcap adventure to find the booty. Joining the fray is Jam K (Maurya), the don's son who just wants to rap.

As slapstick capers go, the film has a half decent roster of interesting characters and likable enough story to hang jokes onto. Problem is that Nagesh isn't able to utilize the characters beyond their obvious use as someone to spout dialog, and the funny moments are so few and far between that the film is entirely tepid for the duration of its runtime.

Talpade is the best thing about this film then, an actor so supremely confident and full of screen charisma that he carries the movie on his shoulders throughout. Be it the madcap adventurism or the little moments of quiet, he is in every sense the hero of the film. Christianson, though, is a little uncomfortable, and beyond the confused or stoic expressions, the tongue-in-cheek treatment of her character that is required of her is missing.

I mentioned earlier that Nagesh has managed to transcend as a director into a confident man with a penchant for the right shots. Be that as it may, the cinematography of the film remains pedestrian and uninteresting. Being that it is shot in Bangkok, that is a dubious accomplishment Sudeep Chatterjee wants to live without.

With so many things going wrong, you can still be assured that our Nagesh isn't yet lost. There are a few uproariously funny moments and some earnest bits of dialog that remind you of vintage Kukunoor, as well as the masterful symbiotic relationship between director and actor that him and Talpade bring to the screen. This film is an attempt by him to break free of any moulds, and I earnestly hope that he gets over this phase quickly enough and gives something to smile about once again.
Share. Save. Connect.
Tweet
BOMBAY TO BANGKOK SNAPSHOT

ADVERTISEMENT
This page was tagged for
Bombay To Bangkok hindi movie
Bombay To Bangkok reviews
release date
Shreyas Talpade, Lina Christianson
theatres list
Follow @fullhyderabad
Follow fullhyd.com on
About Hyderabad
The Hyderabad Community
Improve fullhyd.com
More
Our Other Local Guides
Our other sites
© Copyright 1999-2009 LRR Technologies (Hyderabad), Pvt Ltd. All rights reserved. fullhyd, fullhyderabad, Welcome To The Neighbourhood are trademarks of LRR Technologies (Hyderabad) Pvt Ltd. The textual, graphic, audio and audiovisual material in this site is protected by copyright law. You may not copy, distribute, or use this material except as necessary for your personal, non-commercial use. Any trademarks are the properties of their respective owners. More on Hyderabad, India. Jobs in Hyderabad.