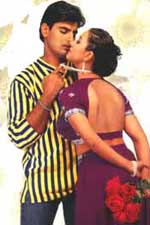 Avishek Gupta / fullhyd.com
EDITOR RATING
1.0
Performances
Script
Music/Soundtrack
Visuals
NA
NA
NA
NA
Suggestions
Can watch again
NA
Good for kids
NA
Good for dates
NA
Wait to rent it
NA
Our heart goes out to the soul of Dada Khondke, which must be in feverish turmoil after this moviemaking mayhem by his progeny. After growing up on a rich diet of high quality (Marathi) cinema, it comes as a wonder that the director could come up with such a disaster of an enterprise.

A musical love story, boasts the cursive hand below the title. And we almost agree. Almost, but not quite. Musical, true - with 18 songs, it had better be. Love, correct again - though one may get sick of it by the end. But story? The movie doesn't even hint at one.

The lead cast is so insignificant that it doesn't feature anywhere in the movie's credits (or maybe names were withheld on request). The plot seems to have been conceived by a rather dense 10-year-old, and the screenplay is worse. Either that, or the movie was scripted for an intelligent and discerning audience -anyone capable of making sense out of this plot would surely have to be high in IQ. This reviewer, with his humble prowess, failed miserably.

The male lead looks like he's stepped out of an ad-copy for designer wear, and a print ad at that, considering his discomfort in handling motion of any kind. And the female lead doesn't speak two sentences before breaking out into songs.

The plot, so to speak, is the much-used rich-girl-in-love-with-poor-guy tale. Alok Nath, as the rich father of an only daughter Tara, is completely wasted. And he, along with Raza Murad, his long-time buddy, does his best in getting her village-hero, Raj, out of her life, including frequent attempts to do him in forever. But true love triumphs over all evil, and the flick comes to its thankful end.

But what the movie scores is in its paradoxes. Our down-to-earth hero, who doesn't have money enough to own a bed, and is often seen working in fields on a tractor, is always in impeccable CK and Levi gear. And drives around in a snazzy gypsy or an imported ATB. The stupidity that is supposed to pass off as comedy grates at your nerves. And the mushy serenading of the young couple is downright annoying.

The adventurous may still risk it as the ultimate test of endurance. But don't dare take anyone along, as the title suggests, as only a gifted few can survive this experience.
Share. Save. Connect.
Tweet
LE CHAL APNE SANG SNAPSHOT