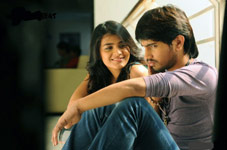 Kritika Deval / fullhyd.com
EDITOR RATING
3.5
Performances
Script
Music/Soundtrack
Visuals
6.0
3.0
6.0
5.5
Suggestions
Can watch again
No
Good for kids
No
Good for dates
No
Wait for OTT
Yes
From its manic pixie heroine to its peppy music to its aspiring-to-be-snappy dialogue, Kumari 21F tries to be a film about outdated perceptions of what Telugu boys expect their womenfolk to be and how harmful these perceptions ultimately are. It is, on the surface, the story of Siddu (Raj Kumar) and his love for a maddeningly confusing girl called Kumari (Heebah Patel). As it turns out, however, the story is about Kumari insofar as it concerns a tiny bit of her flesh, namely her hymen, or lack thereof.

The movie starts with Siddu narrating his fate at the hands of a woman, and thus we meet Kumari, a girl who, ahem, "proposes" to the hapless boy the first time she meets him. The next half hour or so turn out to be pretty entertaining, Heebah Patel being remarkably proficient at playing the ingénue fatale, and Raj Tarun possessing a surprising quality of on-screen magnetism for someone with such unprepossessing looks. We see Siddu in his milieu with his rascally "friends" and hear the sob story of his dad having left his mom when he was young. We see him be wooed relentlessly by this girl who's new in town and is a model and who drinks and smokes and wears tiny clothes but also seems to be completely ignorant of the "fact" that all of these habits of hers should render her a harlot and a Jezebel. And then starts the plot's primary obsession - Kumari and her virginity.

Do let's not talk about all the variety of ways in which this movie pushes so, so many astoundingly regressive ways of thinking even as it purports to be progressive. It would take us all day and get us considerably annoyed. Let's talk instead about the absolute tedium of a full-length movie about one guy's confusion as to whether he can be with a girl who has, just to be clear, probably, but not surely, done the dirty. Of course, if the "hero" did the sensible thing and just said to Kumari, "I happen to be something of a moron and you seem far too comfortable with your body for my comfort and so I have to ask: have you had sex before?", we wouldn't have had a movie.

So, instead, we sit through astonishingly contrived scenes that arouse doubt in Siddu's insecure bosom. Kumari has Siddu rush to the hospital and sign off on a friend's abortion procedure, which leads Siddu to "doubt" her. His sleazy rowdy-cheater friends add fuel to the fire by pointing out to her career as a model and an aspiring actress, her profusion of male friends, her clothes and so on and so forth.

The whole thing makes you realise the problem with morality - for a virtue so much in demand, it causes far too much and far too real harm. Anyway, this makes his friends devise a "test" for Kumari's claim to the particular virtue that her name signifies, and there is a Big Reveal and somehow the situation with Siddu's parents ties in. Anymore on the plot would be spoilers, and we also would not want to make our fingers barf.

Raj Tarun's character is too annoying for you to enjoy his portrayal of it for too long. Heebah Patel really picks up further into the film. The rest of the characters barely register, except for the aforementioned sleazebag friends played by Noel Sean, Naveen Neni and Sudharshan who play their parts to admiration. The music is quite pleasant, the visuals are mediocre. The film is also very awkwardly cut making the narrative seem jumpy. The cinematography and the general feel of the movie is rather fickle and schizophrenic.

The point is, the film tries to be about how love should be unconditional and that it's better to listen to one's charming girlfriend than to "friends" with criminal proclivities. What you end up getting is a climax that gets the point across in the most half-assed way possible, managing more to reinforce the regressive nature of the story's beginning than to move away from it. This movie also makes you realize that Sukumar does not really write characters, but Ideas, which is true particularly in the case of Kumari. She is basically the embodiment of a trope, particularly a trope that Tollywood seems to currently be in love with as you'll find this trope in movie after movie after movie - that of the scantily-clad manic pixie girl.

Are you looking forward to this one in the hopes that it'll be fresh and exciting and touch new ideas? Well, you're not going to get it. Kumari 21F is a high-profile film with the soul of a B-movie.
Share. Save. Connect.
Tweet
KUMARI 21F SNAPSHOT 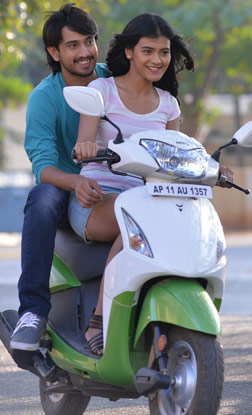 ADVERTISEMENT
This page was tagged for
kumari 21f telugu full movie
Kumari 21F telugu movie
Kumari 21F reviews
release date
Raj Tarun, Heebah Patel
Follow @fullhyderabad
Follow fullhyd.com on
About Hyderabad
The Hyderabad Community
Improve fullhyd.com
More
Our Other Local Guides
Our other sites
© Copyright 1999-2009 LRR Technologies (Hyderabad), Pvt Ltd. All rights reserved. fullhyd, fullhyderabad, Welcome To The Neighbourhood are trademarks of LRR Technologies (Hyderabad) Pvt Ltd. The textual, graphic, audio and audiovisual material in this site is protected by copyright law. You may not copy, distribute, or use this material except as necessary for your personal, non-commercial use. Any trademarks are the properties of their respective owners. More on Hyderabad, India. Jobs in Hyderabad.