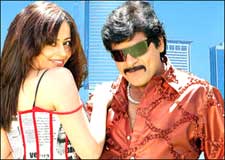 Krishna KBS / fullhyd.com
EDITOR RATING
2.0
Performances
Script
Music/Soundtrack
Visuals
6.0
3.0
4.0
4.0
Suggestions
Can watch again
No
Good for kids
No
Good for dates
No
Wait to rent it
No
Call it the Puri Jagannath influence. Otherwise, how would one explain the queer obsession that directors these days seem to have with titles that are nothing more than abuses? A month ago, we had Donga Sachinollu, and now this. Pokiri, Idiot and Desamuduru were successful because of the content, the cast, and the packaging, a point seemingly lost on directors like Ramalingeswara Rao.

Anyway, Rao joins the company of directors of films like Poramboku and Stupid with this mishmash of a film. Yes, it is a muddled movie all right; worse, the director takes it upon himself to preach home-truths, and push on to the unsuspecting audiences, not so homely (or for that matter, comely) girls doing a jig to sell, of all things, condoms.

But I am getting ahead of myself - that bit comes later in the movie; though, considering the hotchpotch jumble that this film is, it is difficult to keep track of all that happens in it and the order in which things happen.

Sombabu (Ali), the only son of well-to-do farmers, is a pampered guy and a wastrel. His laziness is the talk of the town; though, as is usual with this kind of movies, the village folk are equally eloquent about his good nature.

Being a lout, Sombabu wastes his days roaming around the village with his four stooges, swindling foreigners in the guise of a tourist guide, and consuming liquor in buckets. On one such day, he chances upon Rohini (Ruksha), who has come to the village to do a project on the temple. He promptly falls in love with her, but dallies about proposing.

Meanwhile, a team of three villains (Jeeva, Jayaprakash Reddy, AVS) covet the land belonging to Sombabu's parents. They hatch a plan to get Sombabu out of the way, the upshot of it being that our hero is imprisoned for stealing idols. The movie continues its meandering and mind-numbing path, and ends on an expected note.

Ali's forte is comedy; and the few people who visit theatres playing his movies, come expecting a laugh riot. However, that is sadly not the case here. The film manages to raise barely a chuckle, and seems more like a cross between an old Doordarshan serial and a tourist guide.

Ali, of course, is competent. Nevertheless, he looks too old and too paunchy for the role, and as we said earlier, gets to mouth hardly any funny lines. Ruksha is strictly passable - in both the acting and the looks departments. Experienced comedians form the rest of the cast, and they perform adequately, their undemanding and rather boring roles.

Mano has come up with a couple of decent tunes; but they can't stay with you even until you leave the theatre. As for the editing, a drunk seems to have got hold of the scissors, resulting in the viewer grappling with scenes that do not make any sense.

Unless you are as jobless as the hero of this movie is, do not venture to watch this one.
Share. Save. Connect.
Tweet
SOMBERI SNAPSHOT

ADVERTISEMENT
This page was tagged for
Somberi telugu movie
Somberi reviews
release date
Ali, Ruksha
theatres list
Follow @fullhyderabad
Follow fullhyd.com on
About Hyderabad
The Hyderabad Community
Improve fullhyd.com
More
Our Other Local Guides
Our other sites
© Copyright 1999-2009 LRR Technologies (Hyderabad), Pvt Ltd. All rights reserved. fullhyd, fullhyderabad, Welcome To The Neighbourhood are trademarks of LRR Technologies (Hyderabad) Pvt Ltd. The textual, graphic, audio and audiovisual material in this site is protected by copyright law. You may not copy, distribute, or use this material except as necessary for your personal, non-commercial use. Any trademarks are the properties of their respective owners. More on Hyderabad, India. Jobs in Hyderabad.