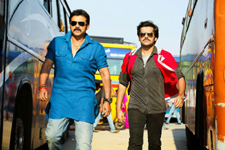 Ravi Kandala / fullhyd.com
EDITOR RATING
5.5
Performances
Script
Music/Soundtrack
Visuals
7.0
4.0
2.0
4.0
Suggestions
Can watch again
No
Good for kids
No
Good for dates
No
Wait to rent it
No
We wonder which absolutely creative genius came up with the name "Masala" for a movie. Whether it was bankruptcy of ideas, or an honest intent to summarize in one word the content of the film, the title told us one thing - that we were headed to watch a no-brainer.

And a no-brainer it was. Masala is a remake of Bol Bachchan, which was panned by critics and loved by the audience (if the "Rs. 100 crore" benchmark is any indication of audience love). Masala is also likely to go the Bol Bachchan way, but we also want to tell you that it is not all that bad.

The by-now familiar storyline revolves around Rahman (Ram), who loses his property and livelihood in pursuit of a court case. Accompanied by his sister Sania (Anjali), Rahman lands up in a village presided over by Balram (Venkatesh). Balram lives in a fortress surrounded by a huge entourage, and has only one ambition - to "crush, flush and finish the British with his English" (Balram's words verbatim).

Rahman, who is forced to call himself Ram due to certain manufactured circumstances, gains employment under Balram, and quickly gains his trust. However, Balram sees Ram/Rahman in a mosque one day, and the latter is forced to start another drama - he makes up a twin brother named Rahman. This leads to a whole lot of mistaken identities and confusion, out of which the makers attempt to generate comedy, failing and succeeding in parts.

Masala works to a large extent, as it manages to fill in laughs at regular intervals and does not descend into melodrama for long stretches. Vijayabhaskar, who is not at the top of his game, does not attempt anything new - he faithfully, and with dogged devotion, sticks to the original. In fact, even the locations and the costumes are the same. So Rohit Shetty can take a bow if Masala does well.

Another factor that works in favour of the movie is the performances by the entire cast (except the heroines). Venkatesh, Ram, M S Narayana, Ali, Kovai Sarala and JP excel in their roles and provide ample comic relief.

Ram nails the gay character, even though it is filled every gay stereotype in the book. JP is outstanding in his Doubting Thomas role, and had us in splits with his "Terrible Sir, Terrible" dialogues.

Anjali is wasted in an insignificant role with terrible make-up, and Shazahn Padamsee looks so anorexic it is a wonder she manages to remain standing at all through the film.

The music is seriously bad, and S S Thaman, the man who's hit the fastest half-century in Telugu films (scoring music for 50 films in the quickest time), is churning out trashier tunes with every release. The songs are uniformly terrible. Ram, who is a good dancer, ends up showcasing some good moves for some forgettable music.

The producers clearly had a limited budget, and the movie is wrapped up in limited locales. The technical departments also churn out extremely mediocre output.

If you're not a fan of movies like these, Masala will send you further into angry spells of the "What is happening to the Telugu film industry?" kind. However, if you can forgive its makers for assuming that comedy can cover up all other flaws in the screenplay and story, you won't regret catching Masala.
Share. Save. Connect.
Tweet
MASALA SNAPSHOT 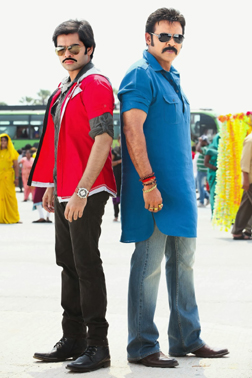 Anorexic shouldn't be taken literally to mean a person diagnosed with anorexia. And no one would find it offensive unless they had serious body image issues. Btw, in creative writing there's something called hyperbole!
Petite Lady on 14th Nov 2013, 8:50pm | Permalink
Dude! "anorexic?"
Seriously? That's highly offensive unless you found Shazahn looking like she has Kwashiorkor or Marasmus. That's called being petite. Unless of course, if you can call JP obese.
Why can't reviewers use senile language.

ADVERTISEMENT
This page was tagged for
Masala telugu movie
Masala reviews
release date
Venkatesh, Ram
theatres list
Follow @fullhyderabad
Follow fullhyd.com on
About Hyderabad
The Hyderabad Community
Improve fullhyd.com
More
Our Other Local Guides
Our other sites
© Copyright 1999-2009 LRR Technologies (Hyderabad), Pvt Ltd. All rights reserved. fullhyd, fullhyderabad, Welcome To The Neighbourhood are trademarks of LRR Technologies (Hyderabad) Pvt Ltd. The textual, graphic, audio and audiovisual material in this site is protected by copyright law. You may not copy, distribute, or use this material except as necessary for your personal, non-commercial use. Any trademarks are the properties of their respective owners. More on Hyderabad, India. Jobs in Hyderabad.