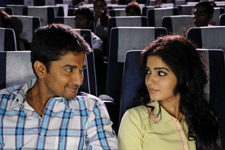 Ravi Kandala / fullhyd.com
EDITOR RATING
5.5
Performances
Script
Music/Soundtrack
Visuals
7.5
5.0
7.5
5.0
Suggestions
Can watch again
No
Good for kids
No
Good for dates
Yes
Wait to rent it
Yes
Gautam Vasudev Menon's love stories should come with a statutory warning, on the lines of - "Watching this film will cause a strong sense of deja vu" or "Beware of SLOW narration". Yeto Vellipoindi Manasu suffers from both these - a strong sense of deja vu, and super-slow narration.

We could copy verbatim from our review of Ye Maya Chesave, just changing the names of the actors and the music director, and it would fit Yeto Vellipoindi Manasu perfectly.

The movie plays out with vignettes of a love story between two youngsters - like in YMC, the goals of the guy interfere with the couple; like in YMC, ego clashes push them further apart; like in YMC, Samantha plays a confused girl; like in YMC, Krishnudu plays the hero's friend; and like in a million other love stories, the couple finally get together. We could go on and on, but let's get to the plot.

The dialogues in the film are simple, and there is no going overboard with the English lines this time. However, the screenplay is where Menon lets the film glide away, his indulgence in the script leading many a scene to run much longer than it should ideally have. Consider this - a 15-minute conversation leads to the interval, and a near 20-minute conversation sequence leads to the climax. A couple of songs play out for more than 15 minutes each, punctuated as they are, with more conversations.

Nani's performance as the guy next door elevates the film considerably. His simple looks and his accent-free Telugu make him a perfect fit for the role. Samantha is very good - but we have seen her do this before. Also, she looks good and does not need to put in extra effort - the nose-ring she wears in the college scenes looks out of place. Krishnudu brings in many a good laugh in the film, and saves the film from becoming a bore-fest.

Illayaraja's music is very good, and the picturisation boosts the songs considerably - the only refrain being that he could have used other voices instead of his own in certain situations. The morphing of "Koti koti taarallona", which describes Nani's feelings, into "Atu itu choosukodu gaa", which describes Samantha's feelings, is particularly good.

Gautam Menon has always been a stickler for detail, and he puts in a visible effort here to ensure that the film looks real. Touches like naming fests in college as "Spectrum" and "Amalgamation" strike a chord. The terrace of the apartments, where a good chunk of the movie is shot, the apartment where Varun lives, the school, the engineering college - most of these are instantly relatable.

However, he should realize that Ye Maya Chesave worked primarily because it was fresh. The lines that the hero spouts, the clashes that the families have, Samantha wearing sarees (which other film then had a 22-year heroine wearing simple cotton sarees?) and looking like a million bucks - all these were fresh touches for an audience tired of faction and action stories. By repeating himself, Menon kills the novelty factor, and most of the movie with it.

All said and done, Yeto Vellipoindi Manasu is a film that will draw extreme reactions. There will be people who will love the story and the "realistic treatment", while there will be many others who will talk about being bored out of their skulls. If you decide to go, be forewarned - you will feel like you've seen it before, and you will consume double the amount of popcorn.
Share. Save. Connect.
Tweet
YETO VELLIPOYINDI MANASU SNAPSHOT 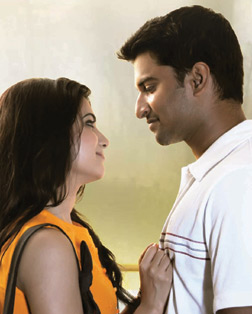 1. Magical moments are good, those who are in love will find them in the characters of Nitya and Varun.

2. Movie is too natual, which wont be accepted in films.

3. Finally Music is not that much expecting. Background score was also dull... except for few moments.


Watching once is really great, instead of getting out of theaters from post climax due to dragging of scenes.

ADVERTISEMENT
This page was tagged for
yeto vellipoyindi manasu telugu movie review
Yeto Vellipoyindi Manasu telugu movie
Yeto Vellipoyindi Manasu reviews
release date
Nani, Samantha
Follow @fullhyderabad
Follow fullhyd.com on
About Hyderabad
The Hyderabad Community
Improve fullhyd.com
More
Our Other Local Guides
Our other sites
© Copyright 1999-2009 LRR Technologies (Hyderabad), Pvt Ltd. All rights reserved. fullhyd, fullhyderabad, Welcome To The Neighbourhood are trademarks of LRR Technologies (Hyderabad) Pvt Ltd. The textual, graphic, audio and audiovisual material in this site is protected by copyright law. You may not copy, distribute, or use this material except as necessary for your personal, non-commercial use. Any trademarks are the properties of their respective owners. More on Hyderabad, India. Jobs in Hyderabad.