Its My Love Story Review 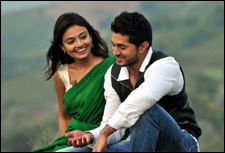 Deepa Garimella / fullhyd.com
EDITOR RATING
5.0
Performances
Script
Music/Soundtrack
Visuals
7.5
5.0
6.5
6.0
Suggestions
Can watch again
No
Good for kids
No
Good for dates
Yes
Wait for OTT
Yes
Whatever else happens to It's My Love Story, one thing is certain: if actors like Arvind Krishna (the film's lead) are not encouraged in the Telugu movie industry, we should all be concerned. Very concerned. Watch the movie to find out just why.

In fact, we should be a little concerned about the absence of a multiplex culture in AP, thanks to which directors like Madhura Sreedhar (who gave us the surprise hit Sneha Geetam last year) do not get the limelight they deserve. This is a breed of filmmakers whose films can never be expected to match the obscene budgets and irrational mass appeal of the biggies, but they're in a league of their own, and have every right for their work to be seen and heard.

It's My Love Story is very un-film-like, in that it is an unhurried narration of simple events in a way that makes it more suitable for television viewing. But as Madhura Sreedhar has shown us earlier, he can bring a lot of clarity of thought into etching out his characters. Basically, these are people you might well know, and this is a story that could have happened to you or to the people you know.

Vandana (Nikitha) is a simple-minded and highly conservative Vizag girl who moves to Hyderabad to realize her dreams of becoming a fashion designer. She makes friends with Arjun (Arvind Krishna), and when she has to move out of her apartment thanks to her flat-mates getting her into trouble with their drug habits, she moves in with Arjun.

They enjoy each other's company, but they don't realize that they're falling in love. What happens when her parents (Jayasudha and Sarath Babu), who were highly concerned about whether city life would "corrupt" Vandana when they gave her permission to move to Hyderabad, get into the picture?

While the characters are un-fictional, the story is flawed. The otherwise conservative Vandana not getting affected by social scorn when she's sharing the same flat as Arjun is a little hard to believe. What stops her from quickly finding another place to stay and yet continuing to hang out with Arjun? Vandana making friends with Arjun over SMSes is also unrealistic. There's also a twist in the end that could have been avoided.

Plus, the narrative is slow and might bore you if you're looking for something else altogether. The dialogues are sometimes corny, and the film has a stagey feel.

But then, the movie has a strong focus on the story, with only the songs coming in the way at times. Also, how Madhura Sreedhar paints his characters' responses to the situations they end up in is worthy of admiration.

Arjun, especially, is as solid a partner as any woman could ever hope for. He sticks by Vandana, and takes the abuses and slaps from her parents and yet never gets sore or bitter.

Vandana's parents react in exactly the same way that any parent in our culture would - they oppose the relationship, even when Vandana officially gets Arjun to speak to them. The irony of them fixing a match with an NRI in about half an hour over an Internet pelli choopulu session, while their key grouse against Arjun is that she has known him "only for 6 months", just cannot be missed.

Meanwhile, Vandana is a girl who's understandably helpless about her situation - again, something that several 20-somethings in the audience are likely to be able to identify with.

Back to Arvind Krishna, then. This is an actor who's willing to go beyond being just a pretty face and well-worked-on body (not that we're complaining about the prettiness), and seems to deliver, even if only when guided by an able director. He's blessed with a very good voice and good diction, too. All this translates to a remarkable screen presence, but one that he never abuses - his sober, dependable performance is the stuff of debut dreams.

Nikitha, on the other hand, is limited to being and acting cute. While she probably doesn't match up to the charisma of the hero, she's okay in a role that is largely childish.

Jayasudha and Sarath Babu exude grace, as always. Vennela Kishore is amazing as the homosexual fashion designer - not that we think this is a realistic portrayal, but he's hilarious just the same. Meanwhile, Sandeep Kishen is in an item song. One of Sneha Geetam's actresses plays Vandana's cousin.

The music is pleasing, but the visuals are just about average. The constant TV-serial-like feel works against the movie.

It's My Love Story is an imperfect film, but delightful for the promise it shows. Catch it quickly - it's not likely to last very long at the theatres.
Share. Save. Connect.
Tweet
ITS MY LOVE STORY SNAPSHOT

See Its My Love Story full details
ITS MY LOVE STORY USER REVIEWS
1 - 3 OF 3 COMMENTS
POSITIVE  |  NEGATIVE |  NEWEST  |  OLDEST  |  MOST HELPFUL  |  LEAST HELPFUL
USER RATING
3.5
2 USERS
Performances
Script
Music/Soundtrack
Visuals
4.0
3.5
5.0
4.5
Can watch again - No
Good for kids - No
Good for dates - Yes
Wait for OTT - Yes
Ammanamanchi Krishna on 13th Nov 2011, 7:14pm | Permalink
"if actors like Arvind Krishna (the film's lead) are not encouraged in the Telugu movie industry, we should all be concerned. Very concerned"

Our mistake - we've fixed the name, and regret the mix-up. Thank you for pointing it out!

Cheers
The fullhyd.com Team
Narayan on 12th Nov 2011, 4:49pm | Permalink
Hi, the name of the heroine is Nikitha and not Ankitha...please correct it. You need to get the names right, before reviewing it...