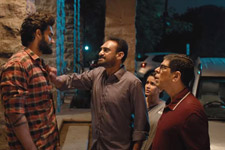 Anil Bandhakavi / fullhyd.com
EDITOR RATING
6.5
Performances
Script
Music/Soundtrack
Visuals
7.0
7.0
6.0
6.0
Suggestions
Can watch again
No
Good for kids
Yes
Good for dates
Yes
Wait to rent it
No
Chaavu Kaburu Challaga is a romantic comedy-drama that gets philosophical as it ties in the inevitabilities of love and death together, giving the classic Telugu love story an unusual spin. Written and directed by Pegallapati Koushik, the movie urges you to rethink love as something beyond the usual "boy meets girls and they live happily ever after" model, but the message is conveyed in a gentle story with no urgency.

Basthi Ballaraju (Kartikeya Gummakonda) rides around in a hearse by the name Swargapuri Vahanam, and makes his daily living transporting bodies to cremation sites and graveyards. He is not one to get caught up in the details of a matter - an attitude that stems from a philosophical view of life as a temporary journey, owing to his constant exposure to death in his line of work.

One day, on a routine run to pick up a body, Ballaraju encounters a young Mallika (Lavanya Tripathi), who's just lost her husband, Peter. Ballaraju is knocked sideways by her countenance, and with no regard for the setting, expresses his intention to marry her right after the funeral of her husband. Mallika and her family are pushed to the point of disgust by Ballaraju's harassment at a time when they're mourning the loss of Peter.

Ballaraju, who accepts Peter as an unchanging part of Mallika's past, is determined to win her over, and keeps advancing his efforts despite warnings from Mallika and members of her family. Naturally, constant exposure to something begins to change one's outlook, as happens with Mallika as she learns more and more about Ballaraju's love for her.

For a tale that's set up like just another love story off the shelf, Chaavu Kaburu Challaga takes jabs at several social constructs at once. The film casually handles the matter of remarriage in two ways. On the one hand, the issue is cleverly dissolved into Ballaraju's love for Mallika, and is masked by the emotional bond that you now have with them as a possible couple, and then further de-emphasized by Ballaraju's view that life is a continuum whose truth is constantly evolving. Indeed, Ballaraju is like a spiritual physicist of sorts.

The same issue, on the other hand, is handled in a highly radical fashion that's too much for even Ballaraju, as his mother, who's spent years tending to her paralyzed husband, develops a bond with a man (Srikanth Iyyengar) who's compassionate about her situation. Ballaraju now has to stretch his views to come to terms with his mother's choices in a move that - in the interest of keeping the theme alive - can be likened to the evolution of classical physics into relativistic physics.

Nested in this effort to allow love, compassion and human bonding to prevail, is the matter of inter-faith coupling. Ballaraju is Hindu and Mallika is Christian, but this matter is not even addressed, and is allowed to play out as a matter of fact. And Ballaraju's mother takes a swig of rum here and there to relax herself, a factoid thrown in without making a big deal of it.

There is a simple sweetness in the feel of this tale that gives it a relatable touch and makes you feel close and connected to its unfolding. As such, the movie is just another love story and not an effort to challenge your beliefs in any way. The characters are real with no far-reaching idiosyncrasies that distance you from them. And the emotional journey is strung together by well-written humour that is not executed in the form of some parallel track. Romance, comedy and drama are balanced neatly in the narrative.

Kartikeya Gummakonda and Lavanya Tripathi capture the realness of their characters through performances that keep you invested in the story. Aamani and Murali support the proceedings with ease. The music by Jakes Bejoy matches the mood of the movie throughout, and the visuals are natural.

Continuum would be the most apt word to describe Chaavu Kaburu Challaga as all aspects come together seamlessly in a product that is very well packaged. The fat has clearly been trimmed well, as the 137 minutes go by with no lags. Chaavu Kaburu Challaga is an entertainer for all ages.
Share. Save. Connect.
Tweet
CHAAVU KABURU CHALLAGA SNAPSHOT 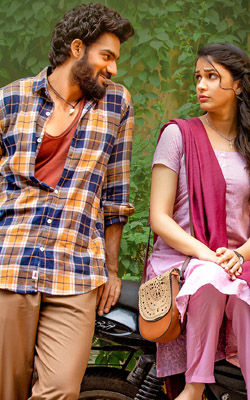 ADVERTISEMENT
This page was tagged for
Chaavu Kaburu Challaga telugu movie
Chaavu Kaburu Challaga reviews
release date
Kartikeya Gummakonda, Lavanya Tripathi
theatres list
Follow @fullhyderabad
Follow fullhyd.com on
About Hyderabad
The Hyderabad Community
Improve fullhyd.com
More
Our Other Local Guides
Our other sites
© Copyright 1999-2009 LRR Technologies (Hyderabad), Pvt Ltd. All rights reserved. fullhyd, fullhyderabad, Welcome To The Neighbourhood are trademarks of LRR Technologies (Hyderabad) Pvt Ltd. The textual, graphic, audio and audiovisual material in this site is protected by copyright law. You may not copy, distribute, or use this material except as necessary for your personal, non-commercial use. Any trademarks are the properties of their respective owners. More on Hyderabad, India. Jobs in Hyderabad.