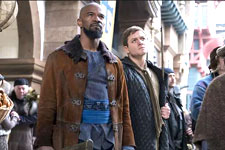 Sonali Dabade / fullhyd.com
EDITOR RATING
4.0
Performances
Script
Music/Soundtrack
Visuals
4.5
4.0
4.0
4.5
Suggestions
Can watch again
No
Good for kids
No
Good for dates
No
Wait to rent it
No
So you know how it broadly goes. Lord Robin of Loxley (Taron Egerton) falls in love with Lady Marian (Eve Hewson) after she tries to steal a horse. He is drafted into the Crusades by the Sheriff of Nottingham (Ben Mendelsohn), and while there, cannot stomach the fact that innocent people are being slaughtered by the sheriff's soldiers. Yahya (Jamie Foxx), a soldier from Arabia, is made to witness his son being beheaded. Robin tries to save father and son but is shot instead and sent back to England on the next ship with other wounded soldiers.

Robin, who has left his manor in Marian's care, returns to find it in shambles. He goes looking for Marian at the mines but finds that she is now with Will (Jamie Dornan), an ambitious people's man who sees politics as his way to the top. Heartbroken, he makes his way back, only to be intercepted by John (which is Yahya's English name), who wants to uncover the evil side of the sheriff, a goal justified when they listen to him address the people of Nottingham.

Robin's decision to take on the evil and unjust sheriff, backed by John's mentorship, turns him into a legendary vigilante, the Hood. He fights the sheriff's tax imposition on the citizens of Nottingham by stealing from the treasury and leaving money at the citizens' doors. Things come to a head when he realizes the depths to which the sheriff has fallen, backed by the Church which is looking to wrest power from the Kingdom. And now, Robin Hood has to fight tooth and nail to end the menace once and for all.

And it's all bad. Very bad. Where do we even start with what went wrong in this movie? It starts off saying that this is no bedtime story, the only explanation for which is that the makers probably thought that this was going to be a timeless classic version of Robin Hood. Robin Hood is said to have been in action about a millennium ago. But instead, the movie is stuck in a weird time conundrum, where men are wearing blazers and jeans and walking around the tiled streets like it's nobody's business. Not to forget war veteran Robin's ability to conjure money to pay his way to the "big table" and get insider information. But HOW?

There's nothing in this movie that you haven't seen before. There's the hero who thinks he is not, his love interest who convinces him that he is, a hard taskmaster, civilians in distress trodden upon by the evil local dictator, and an ambiguously intentioned people's man who in reality is just looking out for himself. The script is badly structured, with no satisfactory end, and looks like it was made on the go. It is a shoddy attempt at telling a tale with merely a star-studded cast.

The action sequences are laughably bad, and some are plain ridiculous. It is more a confused mess, full of wagons erupting into fire, sparks raining down from wooden bridges, swooshing cloaks and Taron Egerton's uncovered, terrified face, than fighting for justice in the dark.

Taron Egerton's portrayal of the legendary, almost-mythical vigilante leaves much to be desired. You'd think that someone who has films like the two Kingsman movies and Eddie The Eagle to his credit would make a little more effort to look natural. Jamie Foxx is too fierce, and his dialogue is so strained and stressed that your head throbs at the unnecessary intensity of it all. Eve Hewman, who happens to be Bono's daughter, is unexceptional, and doesn't have much to do except give Robin "Rob" Hood a few words of encouragement that you've heard a million times before.

Ben Mendelsohn as the sheriff looks like he has been airlifted from the early 2000s and dropped back in time. His performance is over-the-top, as if trying to reinforce the bad guy stereotype of steely, glinting eyes while talking in a low baritone. Jamie Dornan as Will isn't something to look forward to, and neither is Tim Minchin as Friar Tuck. Oscar-winning actor F Murray Abraham makes an appearance that goes completely to waste.

The background score of the movie is standard fare, and something you've probably heard in a superhero movie before. Its presence is more annoying than enhancing the mood of the movie - if there's anything left to enhance in it, that is.

The major problem, however, is the cinematography. The camera whirls around, and this movement is expected to mask whatever it is that Robin Hood and John are trying to do. For example, when John stops a cart surrounded by guards, the camera follows him, and Rob gets on the cart on the other side - apparently if the viewer didn't see him, it so follows that the guards couldn't see him either. Who do they think he is - John Cena?

Whatever it is that this movie is trying to be, it's neither legendary nor a timeless classic. You'd best avoid this one.
Share. Save. Connect.
Tweet
ROBIN HOOD (2018) SNAPSHOT 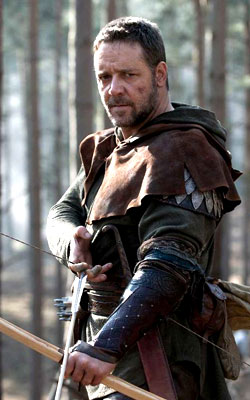 ADVERTISEMENT
This page was tagged for
Robin Hood (2018) english movie
Robin Hood (2018) reviews
release date
Taron Egerton, Jamie Foxx
theatres list
Follow @fullhyderabad
Follow fullhyd.com on
About Hyderabad
The Hyderabad Community
Improve fullhyd.com
More
Our Other Local Guides
Our other sites
© Copyright 1999-2009 LRR Technologies (Hyderabad), Pvt Ltd. All rights reserved. fullhyd, fullhyderabad, Welcome To The Neighbourhood are trademarks of LRR Technologies (Hyderabad) Pvt Ltd. The textual, graphic, audio and audiovisual material in this site is protected by copyright law. You may not copy, distribute, or use this material except as necessary for your personal, non-commercial use. Any trademarks are the properties of their respective owners. More on Hyderabad, India. Jobs in Hyderabad.