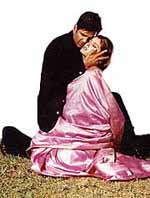 Avishek Gupta / fullhyd.com
EDITOR RATING
5.0
Performances
Script
Music/Soundtrack
Visuals
NA
NA
NA
NA
Suggestions
Can watch again
NA
Good for kids
NA
Good for dates
NA
Wait to rent it
NA
Close on the heels of Grahan, we have another good script that is sacrificed to some pedestrian direction and an inordinate delay in release. Indeed, even slightly above average narration would have sufficed to make a good tale out of a promising script like this. You start wondering what the criteria for choosing directors for Bollywood movies are.

Like we said, the plot is pretty different from the normal stuff. Sagar Chauhan (Sunil Shetty) is the dynamic pack leader of the special protection unit. His duty is to provide 'Z' category security to VVIPs. Funny, then, that he is currently assigned to baby-sit the deranged wife, Meenal (Raveena), of a wealthy industrialist, Danny.

The plot thickens when Meenal decides that the brawny officer is the guy of her dreams (and now you're really convinced she's deranged), but as her love goes unrequited, she ends her life. Depressed, our hero goes away to Goa to get over Meenal's death, only to discover her look-alike, Pari.

So sure is Sagar that this is the same Meenal that he brings her home with him. After lengthy questioning of both Pari and the grieving hubby, Danny, our able hero is still as confused about the true identity of the lady in question, because of strong evidence pointing both ways. The mystery becomes more intriguing as the officer gets embroiled in the investigation.

We'll admit this much: 'Officer' has an attention-grabbing plot. But writer-director Naeem Sha's handling of the screenplay lacks the finesse that a theme like this demands. The narrative had scope for several engaging moments, but what starts off well culminates into a routine entertainer.

It would be wrong to blame the director completely - the time that the film took to be completed is evident throughout the narrative. That is one valid rationale for the drama not being electrifying at all - it bears a stale look at places.

The film gathers momentum towards the second half, but the murders that follow and the unnecessary usage of action dilute the impact considerably. Moreover, to cater to Sunil Shetty's action image, the screenplay tilts towards blood and gore, which we could have been spared of. Even the climax is bland.

The film also lacks a good musical score, and barring the 'Pari' number, none of the songs is worth humming. To add to the woes, the songs haven't been publicized well. Cinematography is adequate but fails to impress.

Sunil Shetty seems to be specializing in run-of-the-mill roles. Raveena Tandon gives a decent account of herself. Danny Denzongpa is the best of the lot. Sadashiv Amrapurkar is loud as always, and is to be ignored for sanity's sake.

On the whole, 'Officer' is an oft-repeated saga that does not hold any promise, but for the script, which gains it the extra star.
Share. Save. Connect.
Tweet
OFFICER SNAPSHOT

ADVERTISEMENT
This page was tagged for
sunil shetty movie officer movies
Officer hindi movie
Officer reviews
release date
Sunil Shetty, Raveena Tandon
Follow @fullhyderabad
Follow fullhyd.com on
About Hyderabad
The Hyderabad Community
Improve fullhyd.com
More
Our Other Local Guides
Our other sites
© Copyright 1999-2009 LRR Technologies (Hyderabad), Pvt Ltd. All rights reserved. fullhyd, fullhyderabad, Welcome To The Neighbourhood are trademarks of LRR Technologies (Hyderabad) Pvt Ltd. The textual, graphic, audio and audiovisual material in this site is protected by copyright law. You may not copy, distribute, or use this material except as necessary for your personal, non-commercial use. Any trademarks are the properties of their respective owners. More on Hyderabad, India. Jobs in Hyderabad.