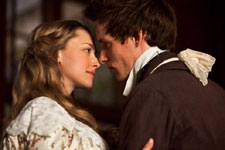 Kritika Deval / fullhyd.com
EDITOR RATING
7.0
Performances
Script
Music/Soundtrack
Visuals
8.0
5.0
7.0
8.0
Suggestions
Can watch again
Yes
Good for kids
No
Good for dates
Yes
Wait for OTT
No
There is a certain kind of cinema that knows exactly what it wants, and goes for it without any hesitation whatsoever. Les Mis Miserables, the latest rendition of Victor Hugo's tale of wretched souls and social apathy in 19th century France, is one such film, that is solely directed at bagging those little golden statues, right from the casting to the extravagant production.

As it turns out, Tom Hooper's Les Mis?Â©rables has already passed the first test of fire, aka the Golden Globe Awards.

The story, for those unfamiliar with the classic, is as follows. Set in years spanning from 1815 to the June Rebellion in 1832, Les Mis?Â©rables is made up of several tales of morality, suffering, betrayal, and love.

What holds them all together is Jean Valjean (Hugh Jackmann), an ex-convinct who breaks his parole and takes on a new identity, and becomes the Mayor of a town called Montreuil. However, his past still shadows him in the form of Inspector Javert (Russel Crowe), the man who put Valjean in prison for having stolen bread to feed his sister's children.

In one of his factories works the trajic Fantine (Anne Hathaway), a young woman who is in dire need of funds to take care of her illegitimate daughter Cossette (Isabelle Allen when young, and Amanda Seyfried as an adult). Inadvertantly, Valjean causes Fantine to lose her job, who eventually ends up as a prostitute to send money to the innkeepers who are taking care of Cossette. Valjean, confronted with the consequences of his actions, promises to take care of Cossette, and gets a critically ill Fantine admitted to the hospital, where she passes away, content that her child is in safe hands.

Meanwhile, Javert is still hot on Valjean's heels, and Valjean is stuck between wanting to do the right thing, and keeping his promise to Fantine.

He goes with the latter, finds Cossette, who is being used as an unpaid servant by the comically avaricious Th?Â©nardiers (Sacha Baron Cohen and Helena Bonham Cartier), and then goes off to Paris with her to live happily ever after for the next nine years, until the beginning of the June Rebellion, that is.

The year is 1832, and a group of students in Paris, who call themselves "The Friends Of ABC", are up in arms against the return of monarchy, led by Marius Pontmercy (Eddie Redmayne), and Enjolras (Aaron Tveit).

Long story short, Marius and Cossette spot each other on the street and fall in love. Meanwhile, Marius's friend ?â€°ponine (Samantha Barks) is also in love with Marius, but nevertheless helps him meet Cossette. But their budding romance is nipped in the bud when Valjean has to flee yet again.

Will the love ever be requited? Will Javert ever get over his (frankly weird) obsession with Valjean? Will Valjean find what he is looking for (which, by this point, we have no idea of)? And what happens to the revolution?

These questions are answered in the rest of the movie, if you find yourself looking beyond the spectacle of it all. Les Mis?Â©rable is a grand tale deserving every bit of the grand treatment it recieves in this version. However, the musical overwhelms you from the word go.

Hooper's much publicized move to shoot the songs live instead of having them pre-recorded, thus making the connection more intimate, works in the sense that all those Oscar-worthy performances get all the coverage they need. However, all that alone time the stars get with the camera gets rather monotonous.

The songs are mostly monologues with the performers staring right at the camera, in extreme close-up, as they show off the whole range of contortions their faces can go through, and, bizzarely enough, their nostrils (completely hair-free, we assure you).

In fact, that's exactly what stops the movie from being as engaging as it should be. The film preens and postures way too much. There is little room for subtlety or connection while the action keeps pausing to pose, making the whole thing seem more like a fashion show rather than the dynamic mix of song and dance and dialogue it should be.

But then there are all these amazing moments that make you sit up, like Anne Hathaway's heart-wrenching rendition of "I Dreamed A Dream", the sight of Paris' brave students facing certain death with impunity, their voices united in a song of rebellion and hope, ?â€°ponine's lament of unrequited love, and several others, that will stay with you for a long time to come.

Anne Hathaway's is arguably the best performance, and she is missed in every moment that she doesn't occupy the screen, and every extra moment that Hugh Jackman takes over. That is not to say that the latter isn't brilliant - only, there is too much of him. There is only so much of his staring back at you while whining earnestly that you can take.

Russel Crowe is weirdly adorable, managing to make you root for him even as he does the most despicable things, making his transition from a sternly duty-centric man of God to someone who lets himself feel that much more satisfying. He should have refrained from singing, though.

Sacha Baron Cohen and Helana Boham Carter make evil funny in a way only they can. The song "Master Of The House" will have you close to rolling off the floor.

Eddie Redmayne, Aaron Tveit and the rest fit their roles to a T. Except, maybe, Amanda Seyfried, who seems too vapid to inspire instant passion of the sort her character inspires in Marius.

The cinematography and the sets are stunning, although the camera does tend to go a bit crazy from time to time, probably trying to assert its existance.

The soundtrack is just right, and blends into the action on the screen like salt in water, but that is only to be expected in a musical.

Fans of the musical expecting to enjoy the film will enjoy every bit of it. As for the uninitiated, it can be a bit of a drag it times, but when it soars, it soars real high.
Share. Save. Connect.
Tweet
LES MISERABLES SNAPSHOT 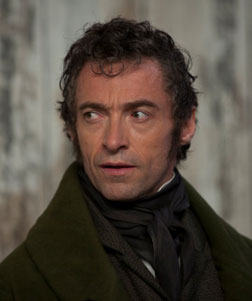 ADVERTISEMENT
This page was tagged for
Les Miserables english movie
Les Miserables reviews
release date
Hugh Jackman, Russell Crowe
theatres list
Follow @fullhyderabad
Follow fullhyd.com on
About Hyderabad
The Hyderabad Community
Improve fullhyd.com
More
Our Other Local Guides
Our other sites
© Copyright 1999-2009 LRR Technologies (Hyderabad), Pvt Ltd. All rights reserved. fullhyd, fullhyderabad, Welcome To The Neighbourhood are trademarks of LRR Technologies (Hyderabad) Pvt Ltd. The textual, graphic, audio and audiovisual material in this site is protected by copyright law. You may not copy, distribute, or use this material except as necessary for your personal, non-commercial use. Any trademarks are the properties of their respective owners. More on Hyderabad, India. Jobs in Hyderabad.