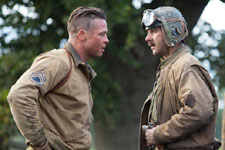 Kritika Deval / fullhyd.com
EDITOR RATING
7.0
Performances
Script
Music/Soundtrack
Visuals
8.0
6.0
8.0
8.0
Suggestions
Can watch again
Yes
Good for kids
No
Good for dates
No
Wait to rent it
No
The Second World War was a world-shaping clash - massive, ideological, with loyalties at least superficially defined. It was the kind of war that would have left all of humanity vastly different today had it not occurred. It was also, hopefully, the last of its kind.

Fury, however, cares for none of this. Fury zooms in, and takes us deep into the death throes of World War II in Germany, as the Nazi army fights with all of its might despite it being obvious that the army will lose; obsessively taking down every American soldier it can even as it goes down spectacularly.

Fury zooms in further, and shows us the uniquely destructive domain of tank warfare. It then shifts focus to get us into the microcosm of the entire war that is one single, flimsy Sherman tank, and its six inmates.

And so, you have Commander Don "Wardaddy" Collier (Brad Pitt), Boyd "Bible" Swan (Shia LaBeouf), Grady "Coon-Ass" Travis (Jon Bernthal), Trini "Gordo" Garcia (Michael Pena) and Norman (eventually) "Machine" Ellison (Logan Lerman) - a mostly-veteran crew that operates an M4A3E8 Sherman tank named Fury. The only person who doesn't quite belong on the team is Norman Ellison, a typist who was fobbed off on a close-knit team to "make a man out of him". It is Ellison that turns what would otherwise have been a generic buddy war movie into a story that is more than just a series of glorified, state-sanctioned, violent activities. It is also Ellison that is our window into a scenario where you see just how formidable an enemy with nothing to lose really is.

Fury doesn't quite have a narrative, in the same way that life doesn't quite have a narrative. This delinked and unfocused quality spills over into the picturisation, the screenplay, and even the behavior of the cast, giving the film a real and visceral quality that is often a weakness, but more often a strength. Basically, while you have a set of events that move the film from point A to point B, you wouldn't call is a "story" any more than you would a single diary entry.

A lot of things happen in it. Wardaddy goes from holding Ellison in contempt to mentoring him. A lot of people die. Tanks get blown up. Little laughs are had. Relationships are built and broken, and there is even an ultimate reckoning. None of these, however, feels structured. This lack of structure, while giving you one heck of an insider's perspective, also does something else that real life does, i. e. allows your brain to wander, a proclivity in your brain that is particularly distressing when it comes to a film that is so very good at painting images that must stay in your mind.

Let us not kid ourselves here. Fury is, at its heart, a genre film. However, it also occasionally flits across genres, giving us glimpses into the decay at the heart of a war that ugly, into emotions beyond "Let's go get those Nazis!", into the hearts of people who know they will die, and will also know a moment of ambivalence about whether or not they have justified their own existence. These shifts are a bit of a hit-and-miss, but when they hit, they raise Fury from a mere war movie into near-greatness.

Brad Pitt brings just the right amount of gravity and depth to his persona of a hardened war veteran who nevertheless faces moments of weakness. Logan Lerman is the heart of the film, and wears his variety of personae with extreme lightness. The rest of the cast, including, surprisingly, Shia LaBeouf, put heart and soul into their characters, and are responsible for the fact that you can connect with all that occurs on screen despite barriers of time and experience.

The cinematography and background score are aptly grimy and filthy and seedy, a testament to David Ayer's determination to strip his rendition of the war of all its glory other than the glory of the human spirit. The camera work and the war graphics often give you a headache, but, well, in a good way that works on a "You had to be there" basis.

If you don't mind putting your emotions through the wringer, Fury is just the right formula for this weekend. If you belong to the tiny fraction of the world's population that makes up old tank aficionados, then you're probably watching this one regardless of the review.
Share. Save. Connect.
Tweet
FURY SNAPSHOT 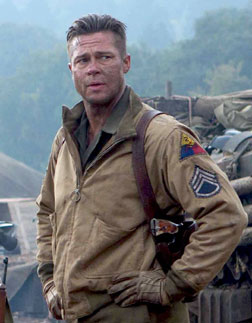 See Fury full details
FURY USER REVIEWS
1 - 1 OF 1 COMMENTS
POSITIVE  |  NEGATIVE |  NEWEST  |  OLDEST  |  MOST HELPFUL  |  LEAST HELPFUL
USER RATING
5.0
1 USER
Performances
Script
Music/Soundtrack
Visuals
6.0
5.0
5.0
9.0
Can watch again - No
Good for kids - No
Good for dates - Yes
Wait to rent it - Yes
Booyakasha on 5th Nov 2014, 10:09am | Permalink
Fury opens a window into life inside a battle tank that I guess has never been done before. Kudos to the makers for capturing this so well. However, overall the movie fell below my expectations. Lots of scenes drag on meaninglessly and the screening could've well been shortened by at least by 150 mins. Pitt, LeBeouf and Lerman stand out. Worth a watch.

ADVERTISEMENT
This page was tagged for
Fury english movie
Fury reviews
release date
Brad Pitt, Shia LaBeouf
theatres list
Follow @fullhyderabad
Follow fullhyd.com on
About Hyderabad
The Hyderabad Community
Improve fullhyd.com
More
Our Other Local Guides
Our other sites
© Copyright 1999-2009 LRR Technologies (Hyderabad), Pvt Ltd. All rights reserved. fullhyd, fullhyderabad, Welcome To The Neighbourhood are trademarks of LRR Technologies (Hyderabad) Pvt Ltd. The textual, graphic, audio and audiovisual material in this site is protected by copyright law. You may not copy, distribute, or use this material except as necessary for your personal, non-commercial use. Any trademarks are the properties of their respective owners. More on Hyderabad, India. Jobs in Hyderabad.