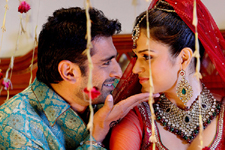 Nupur Barua / fullhyd.com
EDITOR RATING
3.0
Performances
Script
Music/Soundtrack
Visuals
4.0
3.0
5.0
4.0
Suggestions
Can watch again
No
Good for kids
No
Good for dates
No
Wait to rent it
No
ndian cinema does not lack in genres, and the variety in sub-genres can blow your mind. This is a result of the very high levels of optimism that exist in the Hindi film industry ??" if you have money and a few contacts, you can make a movie, and create your own genre.

One such genre is the plotless-OTT-wannabe-comedy-definite-flop-with-failed-and-inexpensive-actors-pretending-to-recreate-realism genre - the category that Lucky Kabootar falls in.

So what is wrong with the movie? Nothing much, really, except that it makes absolutely no sense to watch it. It is a free country, after all, and if one wants to give in to his or her inner child by imposing on us a disastrous audio-visual, it is that person's prerogative. We may embrace it and not complain, or we may reject it, and have no cause to complain anyway.

In Lucky Kabootar, a young (?) man named Lucky (Eijaz Khan) has a problem. He is in love with the hot Kammo (Shraddha Das), but for reasons best known to himself cannot garner the courage to marry her. So he is content being married to somebody else - the very friendly and simple Lakshmi (Kulraj Randhawa), the exact opposite of his girlfriend (thus making it very clear that hot women like Kammo cannot be the girl next door, obviously).

Lucky is stuck in a limbo, and does not react till an accident leads him to believe that Lakshmi has perished. Lucky immediately finds solace in the arms of Kammo, and he is not certain where his life is going, till he discovers that Lakshmi may not, in fact, be dead. And so the chaos begin.

That is all there is to the story, really. The makers insist it is a romantic comedy, but the writers may more likely have been aiming to make it a satire on a romance,. Why else would they feel the need to introduce OTT characters like Phussy and Sexy Daas (Sanjay Mishra)?

To justify the loudness in characters and plot points, the setting is a Punjabi environment, of course (since Punjabis are naturally loud and make no sense, as far as the makers are concerned - or maybe they just thought that would be the only community that would not complain).

One is never quite sure where the screenplay is leading you, because predictable it is not - it borders on the ridiculous, and could have been a great ride, if only the writing were more intelligent. The dialogues bring to mind the movies of the 1990s, specifically the ones in which Shakti Kapoor used to lisp and spout complete rubbish. The humour is more that slapstick - it is a slap on your intelligence, and you cannot help but wonder what the writers were thinking of when they named the holy man's sexy (!!!) assistants Hard Drive and Pen Drive.

The dialogues with double meanings (and that means more than half the movie) are too senseless to be offensive, unless you really want to make the effort to protest the inappropriateness of the same.

Eijaz Khan was such a revelation in Tanu Weds Manu that you wonder why he has not been offered better roles since then. He tries really hard to live up to his character, but fails, and is rather annoying after a point. Ditto for Shraddha Das, who, to be fair, does not really understand what exactly her character is all about. She just pouts and tries to look pretty.

Ravi Kissen flexes his muscles and purses his lips in an effort to look comically menacing, but that is all there is to him. He manages to create zero impact, considering that he had become quite a celebrity at some point not too long ago.

Kulraj Randhawa gives this role all she has, and the result is not too bad. She stands out, and has the audience rooting for her. The scene-stealer, of course, is Sanjay Mishra - in a ridiculous role, but he just makes it look so effortless.

The production design is below average, and every setting looks like a studio. The costumes are ordinary, and do not stand out, even when Ravi Kissen pretends he is God's answer to womankind. The visuals are glossy and unrealistic, and that can be blamed on the cinematographer, of course, but the sets really do not offer much in terms of aesthetics.

The editing could not only have been crisper, but also more comprehensive. The transitions between scenes leave a lot to be desired. The music does not fare too well, either, except for Haal Da Marham - the other songs and their videos are enough to put you off Punjabi music for a while.

The makers of the film were perhaps trying to give some Rohit-Shetty-esque flavour to Lucky Kabootar, with a dash of David Dhawan humour. Sadly, it does not work. The best thing to do, of course, is to avoid this movie, but if curiosity gets the better of you, do not say we did not warn you.
Share. Save. Connect.
Tweet
LUCKY KABOOTAR SNAPSHOT 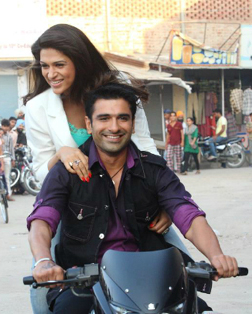 ADVERTISEMENT
This page was tagged for
Lucky Kabootar hindi movie
Lucky Kabootar reviews
release date
Ravi Kissen, Eijaz Khan
theatres list
Follow @fullhyderabad
Follow fullhyd.com on
About Hyderabad
The Hyderabad Community
Improve fullhyd.com
More
Our Other Local Guides
Our other sites
© Copyright 1999-2009 LRR Technologies (Hyderabad), Pvt Ltd. All rights reserved. fullhyd, fullhyderabad, Welcome To The Neighbourhood are trademarks of LRR Technologies (Hyderabad) Pvt Ltd. The textual, graphic, audio and audiovisual material in this site is protected by copyright law. You may not copy, distribute, or use this material except as necessary for your personal, non-commercial use. Any trademarks are the properties of their respective owners. More on Hyderabad, India. Jobs in Hyderabad.