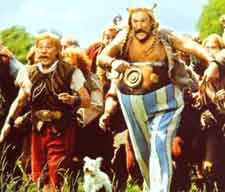 Kiran Nadella / fullhyd.com
EDITOR RATING
7.0
Performances
Script
Music/Soundtrack
Visuals
NA
NA
NA
NA
Suggestions
Can watch again
NA
Good for kids
NA
Good for dates
NA
Wait for OTT
NA
Asterix and Obelix, the legendary comic characters, in a movie? Oh, yeah! The Gauls, who have the reputation for speaking their mind and letting their anger show as well, have finally made it into a material movie, yet again accompanied by their punch-bags... the hot-headed Romans.

The tale goes something like this: a small village of Gauls is the last independent bastion in Julius Caesar (Gottfried John) occupied Gallien. In the village live the cunning Asterix (Christian Clavier) and his good-natured gigantic friend Obelix (Gérard Depardieu). Before long an evil Roman governor, Destructivus (Roberto Benigni), sketches out a master plan to capture the village, according to Caesar's instructions.

Destructivus kidnaps Majestix in order to come into possession of the magic potion. Asterix and Obelix take up pursuit, and the Roman circus comes to a grand flogging final with the elimination of Destructivus' plans and the destruction of Caesar's militia. Thanks to the two heroes, the Gaulish village gets to keep its independence, and exemption from taxes is assured from Caesar for all future.

Generally speaking, it is easier said than done to play popular cartoon characters, for the reason that one must meet the physique of the character and deliver at the same time one's own interpretation of the character. Christian Clavier does it all, in spades. Playing Asterix, he graciously captures and delivers the very essence of the Gaul. As in the comics, Asterix unfolds an enormous amount of energy in the movie, which is followed by a very gentle side.

Gérard Depardieu with his rough charm and attractive humor is well-suited for the role of the bear-strong Obelix. Despite the fact that Obelix the character doesn't appear close to the comics, is charming for the reason that it is not ONLY Obelix, but Obelix plus Depardieu! Robert Benigni as Destructivus expresses the character with superb enthusiasm, which is indeed a treat to watch.

ADVERTISEMENT
This page was tagged for
Asterix and Obelix vs Caesar Full Movie in Hindi
Asterix and Obelix movies in hindi
asterix movie hindi dubbed
asterix and caesar in hindi
asterix obelix take on caesar hindi dubbed
Follow @fullhyderabad
Follow fullhyd.com on
About Hyderabad
The Hyderabad Community
Improve fullhyd.com
More
Our Other Local Guides
Our other sites
© Copyright 1999-2009 LRR Technologies (Hyderabad), Pvt Ltd. All rights reserved. fullhyd, fullhyderabad, Welcome To The Neighbourhood are trademarks of LRR Technologies (Hyderabad) Pvt Ltd. The textual, graphic, audio and audiovisual material in this site is protected by copyright law. You may not copy, distribute, or use this material except as necessary for your personal, non-commercial use. Any trademarks are the properties of their respective owners. More on Hyderabad, India. Jobs in Hyderabad.