I Am Singh Review 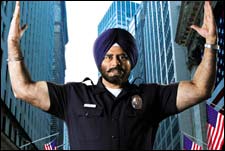 Nupur Barua / fullhyd.com
EDITOR RATING
3.0
Performances
Script
Music/Soundtrack
Visuals
3.0
3.0
4.0
4.0
Suggestions
Can watch again
No
Good for kids
No
Good for dates
No
Wait to rent it
No
Puneet Issar, most famously known as the villainous Duryodhan from the TV series Mahabharat, once starred as the Indian Superman in the movie of the same name. That is probably where he developed a fascination for B and C grade movies, and I Am Singh is his tribute to bad acting and slapdash production design.

The movie begins with an elderly lady in a bad wig sitting on a bench at Ground Zero (the site of the ill-fated World Trade Centre in New York). She starts talking, first to the camera, and then, focusing her attention somewhere else. Her issue? Every person in the world is somehow connected to the events of September 11, 2001, she says, and she wants to share with the audience the story of how her life was affected.

Hers was a happy family, she says. Two of her 3 sons were happy US citizens, and the youngest one was happy in Chandigarh. In her flashback, which is what the entire movie is, she does not shy away from detailing how her youngest, Ranveer (Gulzar Chahel), loved to happily dance the night away with skimpily clad firangs, and so on.

Then disaster strikes. With 9/11 still playing havoc with the sentiments of the American people, her eldest son disappears, her second son is killed in a hate crime by tattooed, white skinheads (but of course), and her husband is battling for his life in the ICU after being bashed mercilessly by the above-mentioned psychos.

Enter Ranveer, who befriends Rizwan (Rizwan Haider), a Pakistani man not afraid to state that he was a witness to the hate crime that killed his brother. Fateh Singh (Puneet Issar) advises them to "take legal action" against the perpetrators of evil so that America can be saved. Fateh, meanwhile, was kicked out of LAPD because he refused to get rid of his turban.

So, although racist violence against Asians has become common across the country and some other parts of the world, our heroes decide that the only way to handle it is to teach thisone particular group of skinheads a lesson. They want to go about it the Indian way (read: ahimsa), but promptly beat up anybody who gets in their way.

Into this confused plot is introduced an Asian society (and that means Indians and Pakistanis) who loiter around in sprawling complexes to discuss the need to unite against the villains. Then there is Rizwan's love interest, Sara (Tulip Joshi), whose father (Yusuf Hussein) fluctuates between approval and disapproval of his daughter's paramour.

To be fair, hate crimes are a serious issue. And yes, Sikhs did have a bad time after 9/11. What is important, however, is how this is translated on the silver screen, and this is where Puneet Issar has failed.

This is a topic that has been showcased with various levels of amateurism in Indian films (think I Proud To Be Indian), but has somehow failed to touch hearts. Getting the skinheads to yell, without conviction, "War! Kill 'em all!" is not good enough, nor is getting the Indian hero to shamelessly ape Sunny Deol.

The acting, in short, is terrible, without exception. The actors have no idea what they are doing. The seriousness is almost farcical. As far as the 2 American leading ladies are concerned, their portrayal of human rights activists and lawyers is accompanied by moves that seem to have been inspired by adult movie stars involved in role-playing foreplay games.

The less said about production design, the better. The colours are dull, and the locations even duller.

You have no choice - you have to skip I Am Singh.
Share. Save. Connect.
Tweet
I AM SINGH SNAPSHOT

ADVERTISEMENT
This page was tagged for
I Am Singh hindi movie
I Am Singh reviews
release date
Puneet Issar, Tulip Joshi
theatres list
Follow @fullhyderabad
Follow fullhyd.com on
About Hyderabad
The Hyderabad Community
Improve fullhyd.com
More
Our Other Local Guides
Our other sites
© Copyright 1999-2009 LRR Technologies (Hyderabad), Pvt Ltd. All rights reserved. fullhyd, fullhyderabad, Welcome To The Neighbourhood are trademarks of LRR Technologies (Hyderabad) Pvt Ltd. The textual, graphic, audio and audiovisual material in this site is protected by copyright law. You may not copy, distribute, or use this material except as necessary for your personal, non-commercial use. Any trademarks are the properties of their respective owners. More on Hyderabad, India. Jobs in Hyderabad.