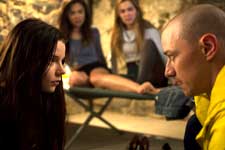 T J Reddy / fullhyd.com
EDITOR RATING
7.5
Performances
Script
Music/Soundtrack
Visuals
9.0
8.0
6.0
7.0
Suggestions
Can watch again
Yes
Good for kids
No
Good for dates
No
Wait to rent it
No
Before we talk about Glass, let's take a look at two other movies that act as culminations of long-gestating cinematic universes: Justice League and Avengers: Infinity War. Even though both movies vary widely in both build-up and quality, they have one thing in common. Both are supposed to be cinematic versions of comic book splash pages with bombastic action, larger-than-life characters and easily relatable themes and conflicts.

When big names with great powers come together, it is the storyteller's responsibility to give the audiences a cacophonous treat they'll enjoy and soon file into the backs of their brains to be retrieved when charting out top 10 lists. M Night Shyamalan's latest movie is the antithesis of this brand of filmmaking as it works towards subverting audience expectations in each frame. It is a cinematic experiment that is vehemently its own thing.

Instead of setting the conclusion of his East Rail 177 trilogy in the massive expanse of a sprawling city, brimming with set-piece potential, Shyamalan contains the narrative to a psychiatric institute. The indestructible David Dunn (Bruce Willis), the multiple-personality-laden Kevin Wendell Crumb (James McAvoy) and the ultra-smart and physically brittle Mr Glass (Samuel L Jackson) are all being treated for their delusions of grandeur by psychiatrist Dr Ellie Staple (Sarah Paulson). One in the trio believes he and his cohorts are special, the other believes otherwise, and the final piece of the trifecta is highly vulnerable to suggestion. As with the previous entries of this franchise, writer/director Shyamalan attempts to unravel the very fabric of the superhero mythos and our understanding of what makes human beings special, with his latest outing.

The intimate setting combined with oodles of philosophical introspection and a distinct visual style make Glass a unique movie-watching experience. The film invites its audiences into its world via a pulse-pounding low-fi action sequence and its distinct colour palette. Once invited the audiences are kept hooked via simple filmmaking touches such as the clever reworking of the classic 180-degree rule. As you watch the characters speak to the screen instead of to each other, their morality, their philosophical outlook of the world around them and Shyamalan's loving critique of the comic books of his youth crackle off the screen with an unmistakable effervescence.

During his customary cameo, Shyamalan's character talks about exorcising his bad habits and turning his life around. This is as true of that throwaway character as it is of the man himself. Gone are the days of unentertaining screenplays with little to no cohesion, and big budget, star-studded movies which lack a reason for being. Glass is the writer/director's wheelhouse to a tee. The movie's ideological standpoint is not far removed from that of The Incredibles but its presentation and the method it chooses to convey its ideas make it a compelling watch for the cynical adult in us all. Shyamalan wants his audience to walk with him on his introspective journey, and he populates all sides of the trail with complex and compelling characters.

However, populating the trail with characters and letting the audiences interact with them are two very different things. As he delves deeper into his story, Shyamalan almost ignores the unbreakable David Dunn played by a version of Bruce Willis that actually gives a s*it for once. With his arc completely explored in his first outing as the character, Bruce Willis has little to offer to the proceedings. The movie's interest lies in its title character and in James McAvoy's splendid performance as the amalgamation of a couple of dozen personalities known as The Horde. The interplay between a focused and hyper-intelligent Mr Glass played with equal parts psychosis and humanity by a terrific Samuel L Jackson, and the scattershot Horde, which ultimately creates empathy for a mass murderer and a killer of women respectively, is an awe-inspiring display of Shyamalan's might with the pen.

His directing skills, however, leave something to be desired. While the film is rife with slick shots and smooth colour palettes, it is occasionally frustratingly heavy-handed and deliberately paced. While fans of the previous instalments of the franchise know about these facets of this movie, fresh pairs of eyes might not look at it all too kindly. Add to this the absence of the iconic score from Unbreakable, and you can't help but feel that something about the film seems amiss.

Through all the aspects of the movie that work and a few instances that don't, if you were to ask us where this film stands in respect to its peers and in the greater pantheon of superhero movies, we would be hard-pressed to allocate a spot for it in any reductive listicle. We find ourselves in this predicament not because the film is excellent beyond critique but because it is unique and celebrates the uniqueness in itself and the unique perspectives people may bring to its story. This story and how it is told encourage thought, introspection, application and discussion. Any movie that does that is aces in our book.
Share. Save. Connect.
Tweet
GLASS SNAPSHOT 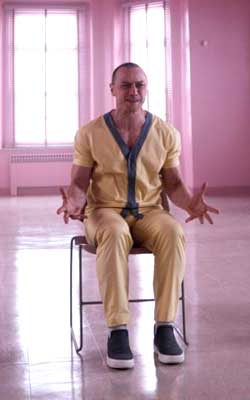 ADVERTISEMENT
This page was tagged for
Glass english movie
Glass reviews
release date
James McAvoy, Bruce Willis
theatres list
Follow @fullhyderabad
Follow fullhyd.com on
About Hyderabad
The Hyderabad Community
Improve fullhyd.com
More
Our Other Local Guides
Our other sites
© Copyright 1999-2009 LRR Technologies (Hyderabad), Pvt Ltd. All rights reserved. fullhyd, fullhyderabad, Welcome To The Neighbourhood are trademarks of LRR Technologies (Hyderabad) Pvt Ltd. The textual, graphic, audio and audiovisual material in this site is protected by copyright law. You may not copy, distribute, or use this material except as necessary for your personal, non-commercial use. Any trademarks are the properties of their respective owners. More on Hyderabad, India. Jobs in Hyderabad.