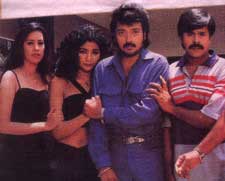 EDITOR RATING
3.0
Performances
Script
Music/Soundtrack
Visuals
NA
NA
NA
NA
Suggestions
Can watch again
NA
Good for kids
NA
Good for dates
NA
Wait to rent it
NA
They are the cigarette-smoking, beer-guzzling, party-hopping generation. The five-some - Anjana, Vijay, Asha, Jackie and Nani - go to celebrate the Valentine's Day, far from the madding crowds, onto the Necklace Road abutting the Hussain Sagar Lake, in the heart of the city. It's a perfect place for the girls to let loose their fantasies - guzzling beer and dancing semi-nude. As for the guys, it is a passionate outing with their girlfriends.

The new generation doesn't just slake its thirst with beers, it even finds swapping lovers cool. And so the girls egg the guys to have a bet where the loser will kiss the other's girlfriend. Jackie, who loses the bet, develops a grudge against Vijay. As if this is not enough, a guy comes with his friends to partake of the fun. And he is beaten to pulp by the boiling Jackie. On their way back home, another "bloody" incident happens that rounds off the day for the group.

As the group is settling down in the college comes news of the first of the murders - that of Anjana. And attempts are made on the lives of Vijay and Asha, too. Clueless, the police gives way to a CBI officer, Arjun (Suman), who sets about the task of unmasking the killer. Undeterred by the CBI officer, the Man In The Black Mask goes about killing the members of the group.

At every stage, the needle of suspicion points to various persons, only to have them be proved innocent. Who is this Man In The Black Mask? And what does he want? Until the end, director Seenu manages to keep up the suspense. You will not be able to find out who it is.
Share. Save. Connect.
Tweet
FEBRUARY 14 NECKLACE ROAD SNAPSHOT

ADVERTISEMENT
This page was tagged for
february 14th necklace road wiki
Telugu movie Road
february 14 necklace road all casts
february 14 necklace road cast
February 14 Necklace Road telugu movie
Follow @fullhyderabad
Follow fullhyd.com on
About Hyderabad
The Hyderabad Community
Improve fullhyd.com
More
Our Other Local Guides
Our other sites
© Copyright 1999-2009 LRR Technologies (Hyderabad), Pvt Ltd. All rights reserved. fullhyd, fullhyderabad, Welcome To The Neighbourhood are trademarks of LRR Technologies (Hyderabad) Pvt Ltd. The textual, graphic, audio and audiovisual material in this site is protected by copyright law. You may not copy, distribute, or use this material except as necessary for your personal, non-commercial use. Any trademarks are the properties of their respective owners. More on Hyderabad, India. Jobs in Hyderabad.