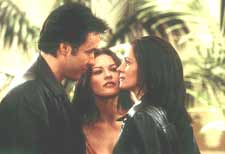 MD / fullhyd.com
EDITOR RATING
6.0
Performances
Script
Music/Soundtrack
Visuals
NA
NA
NA
NA
Suggestions
Can watch again
NA
Good for kids
NA
Good for dates
NA
Wait to rent it
NA
Movies about The Movies invariably get in their best shots when they're shooting. In the first three minutes of America's Sweethearts I saw more climactic kisses than in three months of Bolly-plus-Tollywood. And when the highlight reel runs first, we're usually headed Beverly-downhill. Check your map: a few twists later, it's Long Island in the desert.

Billy Crystal plays a publicist with the easiest job in the world: promoting a film starring America's favorite couple, Eddie Thomas (Cusack) and Gwen Harrison (Zeta-Jones). One problem: there's no film. Its director (a reliably insane Christopher Walken) refuses to hand over the reels until the premiere. Okay, two problems: the couple ain't a couple. Eddie's tried to run a motorcycle over Gwen and the supporting actor she's sleeping with. Crystal has to get them back together while the entire press corps waits for the film to arrive - and there's your comedy! The only moment of suspense coming when Zeta-Jones introduces Hank Azaria (responsible for about half of the voices in The Simpsons) as her Spanish beau and we wait for him to open his mouth.

India is included on the itinerary. Briefly. We meet ex-star Eddie holed away at a very American ashram (run by a long-haired Alan Arkin, who as Yossarian once uttered, "Just because you're paranoid doesn't mean they're not after you."). Flanked by a sardar-tending bar and lithe satyagrahas overthrowing the tyranny of ligaments, the guru gently pounds through Eddie's Xanax-addled brain this message: neurosis is nonsense.

How can Billy Crystal ever hope to translate? Sorry, sadhu, kvetching is what Crystal does - and does well. The only time he stopped complaining (or seemed to) was opposite Woody Allen in Deconstructing Harry. Lest we forget, Cusack did a turn as Allen's alter ego in Bullets Over Broadway.

Crystal's co-written and cast himself in another star vehicle, which amounts to backseat driving: everybody's mouthing his lines. Says one shortsighted studio chief, "There was only one genius in this business, and that was Señor Wences." Crystal's jokes are targeted squarely at baby-boomer America (my parents) and for that reason alone he annoys me. In Hyderabad, somehow, it's okay. I wouldn't have let myself enjoy America's Sweethearts in Detroit, but at Anand I was yukking it up.

On the other hand, as a 20-something I've been trained since early childhood to like John Cusack. More than that, to see him as a role model. He's contemplative, he's a little wacky, he makes tough sacrifices for love. Indian audiences may have caught him in Grosse Pointe Blank - it did make it over here, right? (I did, and I live 15 miles from there.) His understated qualities don't export well, either.

Enough about the two schmucks in analysis - let's talk about Julia Roberts and Catherine Zeta-Jones. They're all overseas audiences will find worth watching in this film. Hats off to whichever casting director noticed both have pointy noses and hence can play sisters. Zeta-Jones is about at her depth as a bad actress and the other half of a star couple. As Kiki, Gwen's sister/slave, Roberts somehow manages once again to appear genuine as she stumbles into love, and out of her bread-free diet. I'll have what she's having.
Share. Save. Connect.
Tweet
AMERICA'S SWEETHEARTS SNAPSHOT

ADVERTISEMENT
This page was tagged for
America's Sweethearts english movie
America's Sweethearts reviews
release date
Catherine Zeta-Jones, Billy Crystal
theatres list
Follow @fullhyderabad
Follow fullhyd.com on
About Hyderabad
The Hyderabad Community
Improve fullhyd.com
More
Our Other Local Guides
Our other sites
© Copyright 1999-2009 LRR Technologies (Hyderabad), Pvt Ltd. All rights reserved. fullhyd, fullhyderabad, Welcome To The Neighbourhood are trademarks of LRR Technologies (Hyderabad) Pvt Ltd. The textual, graphic, audio and audiovisual material in this site is protected by copyright law. You may not copy, distribute, or use this material except as necessary for your personal, non-commercial use. Any trademarks are the properties of their respective owners. More on Hyderabad, India. Jobs in Hyderabad.