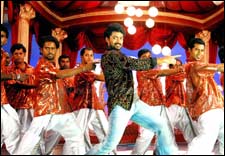 Deepa Garimella / fullhyd.com
EDITOR RATING
3.5
Performances
Script
Music/Soundtrack
Visuals
6.0
3.0
4.0
6.0
Suggestions
Can watch again
No
Good for kids
No
Good for dates
No
Wait to rent it
Yes
When Ramakrishna (Kalyan Ram) was young no one expected him to become a dashing, dynamic football star who the entire nation would cheer for, who would bring glory to his country, and who girls would cause stampedes to marry. And it's a good thing no one expected any of that, since it never happens. What Ramakrishna, however, ends up doing is cause stampedes in theatres for audiences who - after watching some of his action scenes - think they need to visit an asylum or a place of worship to mull over things.

The movie starts off by telling us that Ramakrishna has a very happy family. After a song showcasing their camaraderie (since that is the most appropriate thing for a happy family to showcase in a song), the real film starts. First, a builder (Ahuti Prasad) threatens Ramakrishna's family with goons. Ramakrishna silences him with his muscle power and a rousing speech.

The builder is impressed and offers his daughter's hand in marriage to Ramakrishna. After a few more scenes he offers his son's hand in marriage to Ramakrishna's sister. This seemed like the main theme of the movie, but before we could verify this with the theatre's manager, a new character (Sana Khan) was brought into the picture; a girl who has stalked Ramakrishna for a year, and who now sings and dances with him.

Everything is moving too fast in the flick now. This is when the director comes up with a twist. One day, Ramakrishna's sister goes out shopping and never returns. Usually, it's considered bad manners to go shopping and not return, especially when you're not the one paying the bills. But in the case of Ramakrishna's sister, we find out that she had run away from home to marry her boyfriend (Shaam).

After some days, Ramakrishna bumps into the girl. This time, she's running away from her husband. We thought running is now the main theme of the movie, but we quickly realized there's no one left to help us verify the fact -and also realized that everyone had caught on to the theme long back. In the rest of the movie, Ramakrishna tries to correct his sister's abusive husband and his family (Kota Srinivasa Rao, Ajay, Telangana Sakuntala), and spills a lot of blood in the process.

Kathi is a mindless formula flick that has about 0.002% of fresh content, with the remaining having been regurgitated from the age of the Battle Of Plassey. There is violent language, endless talk of revenge, dense villains and one helpless sister who keeps getting picked on by evil people.

Kalyan Ram is enthusiastic, but if you can digest the fact that a man of his size can hurl heavy-set goons several feet into the air all by himself, the movie deserves you - actually, you deserve the movie. Saranya Mohan is way too child-like to look like a matured actress; in her limited stock of expressions, in the way she runs, and in her general body language. However, this is still a much more substantial role than her earlier ones. Sana Khan is quite good in her limited role.

The songs have some interesting choreography, but if you end up liking the music, there's not much anyone can do about it.

If you're planning to watch Kathi, make sure you don't leave your contact details with the theatre management - they may ask you to fill up the next show, too.
Share. Save. Connect.
Tweet
KATHI SNAPSHOT

ADVERTISEMENT
This page was tagged for
Kathi telugu movie
Kathi reviews
release date
Kalyan Ram, Sana Khan
theatres list
Follow @fullhyderabad
Follow fullhyd.com on
About Hyderabad
The Hyderabad Community
Improve fullhyd.com
More
Our Other Local Guides
Our other sites
© Copyright 1999-2009 LRR Technologies (Hyderabad), Pvt Ltd. All rights reserved. fullhyd, fullhyderabad, Welcome To The Neighbourhood are trademarks of LRR Technologies (Hyderabad) Pvt Ltd. The textual, graphic, audio and audiovisual material in this site is protected by copyright law. You may not copy, distribute, or use this material except as necessary for your personal, non-commercial use. Any trademarks are the properties of their respective owners. More on Hyderabad, India. Jobs in Hyderabad.