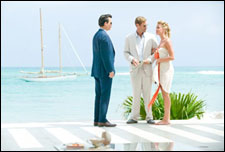 Nupur Barua / fullhyd.com
EDITOR RATING
7.0
Performances
Script
Music/Soundtrack
Visuals
8.0
7.0
7.0
9.0
Suggestions
Can watch again
Yes
Good for kids
No
Good for dates
Yes
Wait for OTT
No
Before you immerse yourself in The Rum Diary, here are a few facts that you should arm yourself with.

1. The movie is based on the book by Hunter S. Thompson, who also wrote Fear And Loathing In Las Vegas and Hell's Angels.

2. Thompson was a journalist who invented his own genre, called Gonzo journalism, in which the journalist or reporter becomes the protagonist of the story, and all the action revolves around him. Events and characters are sometimes fictionalised or exaggerated, for effect.

3. Puerto Rico is an unincorporated organised territory of the USA, which means that the latter has an authoritative hand in its governance.

4. Dwight D. Eisenhower, the 34th President of the United States, practised what was known as conservative policy during his tenure (1953-1961).

5. The San Juan Star was a Pulitzer Prize winning newspaper.

6. This is the second time that Johnny Depp plays a character based on Hunter S. Thompson (the first was that of Raoul Duke in Fear And Loathing In Las Vegas).

Making The Rum Diary a movie was first considered over a decade ago, but various hindrances later, Johnny Depp decided to produce it himself.

In the film, he plays Paul Kemp, a freelance (read nomadic) journalist, who has managed to land a job with The San Juan Star, an English newspaper in the Spanish-speaking region. His editor-in-chief, Edward J. Lotterman (Richard Jenkins), warns him that the newspaper is headed downhill, and that some fresh-blood writing is necessary to save it.

Despite his sincerest attempts to stop drinking, Paul ends up consuming an obscene number of miniature bottles of alcohol, mostly rum, in his hotel room. On learning that those bottles are not complimentary, and after Lotterman's earful, Paul shifts in with the photographer of the paper, Bob Sala (Michael Rispoli), as his tenant. He discovers there that there is another occupant, Moberg (Giovanni Ribisi), also from the paper, who likes to wear an oversized Nazi uniform and listen to Hitler's speeches on vinyl.

Recognising the potential billions that can be generated from a virginal island in the region, Hal Sanderson (Aaron Eckhart), a businessman, decides to use his big-league connections to invest in the region. He befriends Paul and entices him with fancy cars and cash to write promotional material for his business ventures. Paul is not too fond of the man, and Bob warns him about hanging out with the rich and famous, but Hal's girlfriend, Chenault (Amber Heard), becomes Paul's motivation.

Set in 1960, the story has many references to the political scenario of the period. Racism is politically correct, and Communists are a threat. Bruce Robinson, who is also the director, wrote the screenplay under the influence of alcohol, and that explains the randomness of the script. Paul floats through a few life-altering experiences, which do not seem to bother him too much, and all he wants is Chenault.

The story meanders through these events for two hours, and while there is no semblance of a proper beginning, middle and end, it all makes sense. Mostly, it is the humour that holds the entire movie together.

Johnny Depp is brilliant, but then he was always so good at portraying both drunk and stoned men. His expressions and comic timing are commendable. The only place where he looks a little lost is when he confesses to his companion that he is in love.

There could have been no Paul Kemp without a Bob Sala, much like Raoul Duke and Dr. Gonzo (in Fear And Loathing In Las Vegas), and Michael Rispoli is a terrific complement to Depp. Both have a sizzling chemistry, especially when they drive around in Bob's funny little car, and the male camaraderie, without going over the top, is fantastic.

Aaron Eckhart does justice to his role as a businessman, playing the part credibly. Richard Jenkins is a character actor par excellence. Giovanni Ribisi, however, could have been allotted a little more screen time.

Amber Heard looks a lot like Scarlett Johansson, who was also considered for the role, but all she has to do is look pretty and a little wild, which she does admirably.

The real hero of the movie is the production design, including the costumes and the cinematography. Shot in Puerto Rico, the film takes you back to the days of cigarette pants and Panama hats, and of eye-drops that caused hallucinations. The colour palette is bang on, and Colleen Atwood has excelled in costume design.

Watch the movie to get an idea of the offshore American dream that eventually led to bankruptcy and corruption. And if you are a die-hard Depp fan, his histrionics are an added bonus.
Share. Save. Connect.
Tweet
THE RUM DIARY SNAPSHOT

ADVERTISEMENT
This page was tagged for
The Rum Diary english movie
The Rum Diary reviews
release date
Johnny Depp, Aaron Eckhart
theatres list
Follow @fullhyderabad
Follow fullhyd.com on
About Hyderabad
The Hyderabad Community
Improve fullhyd.com
More
Our Other Local Guides
Our other sites
© Copyright 1999-2009 LRR Technologies (Hyderabad), Pvt Ltd. All rights reserved. fullhyd, fullhyderabad, Welcome To The Neighbourhood are trademarks of LRR Technologies (Hyderabad) Pvt Ltd. The textual, graphic, audio and audiovisual material in this site is protected by copyright law. You may not copy, distribute, or use this material except as necessary for your personal, non-commercial use. Any trademarks are the properties of their respective owners. More on Hyderabad, India. Jobs in Hyderabad.