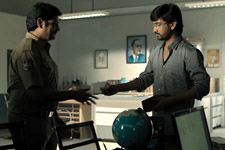 Anil Bandhakavi / fullhyd.com
EDITOR RATING
5.5
Performances
Script
Music/Soundtrack
Visuals
5.0
5.0
6.0
6.0
Suggestions
Can watch again
No
Good for kids
No
Good for dates
Yes
Wait for OTT
Yes
Power Play, directed by Vijay Kumar Konda and written by Nandyala Ravi, illustrates a situation in which an innocent and powerless man is squeezed by the actions of people much more powerful than himself. Vijay (Raj Tarun) is a young man from a middle-class family who's finding his way in this world. He's in love with Keerthi (Hemal Ingle) who's from a wealthier family but is keen on settling down with him, and somehow they convince her parents to agree to them getting married.

However, suddenly a case of counterfeit currency circulating in the market gets pinned on Vijay after some cash that he withdraws from an ATM turns out to be fake. Everyone is doubtful of Vijay's character, including his parents, and he is left all alone to dig himself out of it all.

Power Play makes use of all the right strategies and techniques in every area to generate a thrilling crime drama, but manages to score just about average points in each area. The ideas are good, but the implementation could be better.

To start with, the way in which Vijay is implicated might make you roll your eyes a bit. The police accuse Vijay of circulating counterfeit money with zero evidence - not even doctored evidence to give your intelligence some credit. The filmmakers appear to have just hacked their way on stage to tell their story.

If you ignore the setup, however, the rest of the story follows well with no brash shortcuts - neatly bolstered by a good mix of scandal, drug use, corruption and abuse of power in a plot that links politicians, media, the police force and the common man, it makes for a pretty interesting narrative. The movie does well to remind us that that phrase from the old adage, "to err is human", applies to anyone, and that people in power become quite comfortable with their own flaws and also manage them at the expense of the powerless.

The film also maintains a suspenseful vibe with dark visuals and sound effects that play with your anticipation. Only, if the job had been done with more skill and precision, the result would've been better, as we pointed out earlier.

Raj Tarun is a good choice for the lead role. The protagonist is not invincible, and is depicted as a regular, everyday guy with vulnerabilities, which gives the film a realistic touch. Poorna, whose appearance and demeanour are well thought-out, plays an important role as a politician whose fate gets inevitably linked with that of Vijay. In general, every character in the movie is played by an actor whose appearance is a good fit for the role.

Beyond the thoughtful casting, however, the performances are quite ordinary. Better performances would have elevated the movie's quality by a couple of notches.

There is clearly a "coulda been" element to Power Play. A little extra effort in every area would have made this movie an exciting deviation from the norm. But with a little bit of your own imagination to fill in the gaps created by the shortcomings in production, you'll have a decent flick on your hands.
Share. Save. Connect.
Tweet
POWER PLAY SNAPSHOT 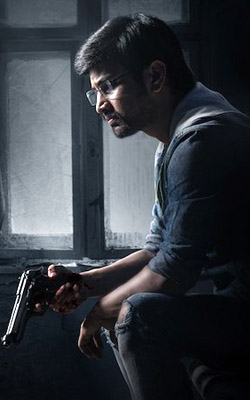 ADVERTISEMENT
This page was tagged for
Power Play telugu movie
Power Play reviews
release date
Raj Tarun, Hemal Ingle
theatres list
Follow @fullhyderabad
Follow fullhyd.com on
About Hyderabad
The Hyderabad Community
Improve fullhyd.com
More
Our Other Local Guides
Our other sites
© Copyright 1999-2009 LRR Technologies (Hyderabad), Pvt Ltd. All rights reserved. fullhyd, fullhyderabad, Welcome To The Neighbourhood are trademarks of LRR Technologies (Hyderabad) Pvt Ltd. The textual, graphic, audio and audiovisual material in this site is protected by copyright law. You may not copy, distribute, or use this material except as necessary for your personal, non-commercial use. Any trademarks are the properties of their respective owners. More on Hyderabad, India. Jobs in Hyderabad.