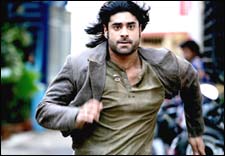 EDITOR RATING
3.0
Performances
Script
Music/Soundtrack
Visuals
5.0
3.0
7.0
8.0
Suggestions
Can watch again
No
Good for kids
Yes
Good for dates
Yes
Wait to rent it
Yes
A good wife is like your cellphone's ringtone - she plays only for you. A bad wife, on the other hand, is like your cellphone's dialtone - she plays for everyone but you. And with that disgusting analogy, let us start the review for Woodstock Villa.

Woodstock Villa is the story of a wife who is somewhere between good and bad - and exactly where between good and bad you find her depends on you. The movie itself, however, is not between good and bad. It's just bad. The plot crumbles at the slightest examination, the performances are as energetic as a TV stand but not as useful, and the film on the whole is likely to feel completely new just a week after you've watched it given how quickly you'll forget it. You tell us if that is a good or a bad thing.

Jatin Kampani (Arbaaz Khan) and his wife Zara (Neha Uberoi, who you might've seen in Balu) are not really setting the town or even their own bedroom afire with their passion. She gets kidnapped one night, and the kidnapper, Samir (Sikandar Kher), asks for Rs. 50 lakhs, but calls the deal off when he learns that Jatin has called the cops, and tells Jatin that he's murdered Zara.

The plot unfolds to show how Zara had actually herself hired Samir to act as her kidnapper to see if her husband loved her enough to pay a hefty ransom amount. But when Samir returns to tell her that Jatin indeed came with the cash, he finds her dead. The cops are looking for Zara big-time now, and Samir is well and truly trapped in a kidnap-murder that he did not even do.

Sure, that sounds quite gripping, but that's because of the way we wrote it. The film lasts a little less than 2 hours, and that's about a hour longer than it should have for the plot. You can find plenty of faults if you have plenty of time, and since we have, we will.

So what was the logic of that fracas between husband and wife shown right at the beginning? Why does Neha get scared of going to the cops when she's done nothing wrong? Why does she stick with Arbaaz after such a great betrayal? When does Sikandar change the bags in the end? Why does Sikandar, whose parents are abroad, run away with money back to the US when it'll be barely $100k there, and set the cops on his trail unnecessarily? Why does one of the cops keep talking cranky?

You can't answer these questions since, of course, you haven't watched the movie, and have no plans to (if you do, rush, since this'll leave town in max 2 weeks). Sikandar (Anupam Kher's son, in case you haven't been reading the papers lately) is okay for a first-timer. Neha reminds you of Dia Mirza - same build, same acting skills. Sanjay Dutt puts in an appearance in a song, that he'll want to forget quick, especially if he did this as a favour.

The film looks slick, like all Bollywood films do. And it has some fairly contemporary music, including a song by The Aryans. However, if there are too many buts left at the end of a thriller, and if there's no really creepy or at least ruthless villian, it doesn't work, no? Woodstock Villa is pretty vacuous both in content and in density, and there's only so much sepia-tinting can do.

The only reason you'd watch this would have to be that you'll get tickets easily.
Share. Save. Connect.
Tweet
WOODSTOCK VILLA SNAPSHOT

See Woodstock Villa full details
WOODSTOCK VILLA USER REVIEWS
1 - 1 OF 1 COMMENTS
POSITIVE  |  NEGATIVE |  NEWEST  |  OLDEST  |  MOST HELPFUL  |  LEAST HELPFUL
USER RATING
2.0
1 USER
Performances
Script
Music/Soundtrack
Visuals
2.0
2.0
2.0
2.0
Can watch again - No
Good for kids - No
Good for dates - Yes
Wait to rent it - No
Krishna on 7th Jun 2008, 9:21am | Permalink
What on the face of it actually seems to be a decent mystery, is complete wasted through hopeless direction, boring pace and an unravelling sans any thrills. Take your girlfriend out for this one and cozy up in the corner.

ADVERTISEMENT
This page was tagged for
woodstock villa movie
Woodstock Villa hindi movie
Woodstock Villa reviews
release date
Sikandar Kher, Neha Uberoi
Follow @fullhyderabad
Follow fullhyd.com on
About Hyderabad
The Hyderabad Community
Improve fullhyd.com
More
Our Other Local Guides
Our other sites
© Copyright 1999-2009 LRR Technologies (Hyderabad), Pvt Ltd. All rights reserved. fullhyd, fullhyderabad, Welcome To The Neighbourhood are trademarks of LRR Technologies (Hyderabad) Pvt Ltd. The textual, graphic, audio and audiovisual material in this site is protected by copyright law. You may not copy, distribute, or use this material except as necessary for your personal, non-commercial use. Any trademarks are the properties of their respective owners. More on Hyderabad, India. Jobs in Hyderabad.