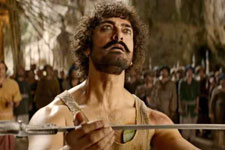 Sonali Dabade / fullhyd.com
EDITOR RATING
5.0
Performances
Script
Music/Soundtrack
Visuals
5.0
5.0
6.0
7.0
Suggestions
Can watch again
No
Good for kids
No
Good for dates
No
Wait to rent it
No
When the trailer for Thugs Of Hindostan was released, the immediate reaction was to brand it as a Pirates Of The Caribbean wannabe. But the film was expected to still be entertaining enough given the coming together of two of the biggest superstars in Bollywood for the first time. However, instead of delivering fireworks, the movie just about keeps its head above water.

Thugs Of Hindostan is a historical fiction story set in the early 1800s. 11 years before the primary events of the movie, a father-daughter duo builds sandcastles on the beach, with their own castle in the backdrop. The father, Mirza Sahab (Ronit Roy), hates the idea of capitulating to the British, and even threatens an East India Company officer, John Clive (Lloyd Owen), who lands on his shores. Of course, Mirza ends up dead, along with his family, barring the daughter, Zafira. Enter Khudabaksh Jahaazi (Amitabh Bachchan), the general of Mirza's army, who whisks young Zafira off to safety.

Fast forward to the present: the steadily expanding British Easy Indian Company has to deal with the band of revolutionaries led by Khudabaksh who call themselves Azaad. His duty, in addition to fighting for freedom, is to teach Zafira the nuances of battle and to keep her safe. They are faced with the wily turncoat Firangi Mallah (Aamir Khan), whose reason behind doing anything is pretty straightforward - he's crooked and cannot change himself. Using his brainpower as a weapon, Firangi almost brings down both parties involved, thanks to much gain promised to him by the British.

We could talk all day about how Thugs Of Hindostan could have been a blockbuster, but that would be a waste of time, just like part of the movie itself. The film is yet another example of how big names and extraordinary visuals cannot carry a movie on its shoulders all by themselves. The makers apparently missed this memo and went ahead creating a film sans the essential elements and filled with loopholes.

The story is pretty simple and old school, but it doesn't have an anchor, much like the ships that go up in flames from beginning to end in this wannabe pirate movie. It uses all expected tropes involving a secret army, of warriors swinging from ropes and ribbons even in the middle of a battle, of the assumption that war cries in baritone make it more effective, and of courtesans being the people who save the day. And of course, pirates are supposed to be smeared in dirt and grime, so there's that, too.

Then, why in the name of God would two Englishmen speak to each other in Hindi? And that isn't consistent, either. Plus, the horror of Powell (Gavin Marshall) at Clive's callous treatment of Indians who retaliate against him seems fair until he is deemed more Indian than most Indians. And by now, the film is pretty much a whirlwind of characters and desperately trying to keep track of what they were originally intended to achieve.

There was every possibility that Aamir Khan would overdo what Firangi was meant to be. But he surprisingly works his charm and is the best part of the movie. You believe him to be every bit the cunning, selfish man he is, and even begin to warn the others not to trust him and curse those who do. He looks like the only actor who actually made any effort to make this a half-watchable movie. Otherwise, every other character is a hybrid of bad acting and bad direction.

The only thing Amitabh Bachchan does is put on his angry-old-man face and shout battle cries as he leads his "soldiers" against the British. And he succeeds to a certain extent, beyond which there isn't much worth talking about.

You would expect Fatima Sana Shaikh to be wonderful as the intense princess Zafira, but while she does channel intensity as she fights, her dialogue delivery is amateur at best. Katrina Kaif is not worth a mention given she has a role that could have been done away with if not for Bollywood's item song requirement. Mohammed Zeeshan Ayyub, in his limited role as Firangi's childhood friend, is funny enough to elicit a few laughs.

The worst parts of Thugs Of Hindostan are its badly composed songs. As for the choreography, it is surprising that it is Prabhu Deva behind Katrina Kaif maneuvering herself into poses and positions that simply cannot be classified as dance.

The background score, however, fits in perfectly with the intended mood of the film, elevating it from a bad, unwatchable movie into the realms of a cringeworthy one-time watch. It does get loud in places, but you'll live with that given it is one of the only saving graces of this movie.

If you're looking for just some visual opulence this weekend and are prepared to ignore everything else, Thugs Of Hindostan might be the movie for you. If only the makers of this one had allocated a fraction of VFX budget to developing a coherent script, maybe they would have gotten the epic movie they targeted.
Share. Save. Connect.
Tweet
THUGS OF HINDOSTAN SNAPSHOT 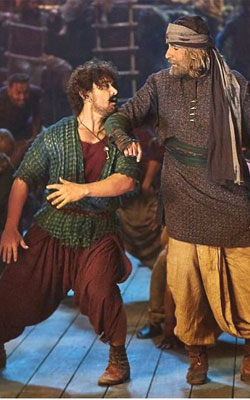 ADVERTISEMENT
This page was tagged for
fashion movie full movie hindi 2008
Thugs Of Hindostan hindi movie
Thugs Of Hindostan reviews
release date
Aamir Khan, Amitabh Bachchan
Follow @fullhyderabad
Follow fullhyd.com on
About Hyderabad
The Hyderabad Community
Improve fullhyd.com
More
Our Other Local Guides
Our other sites
© Copyright 1999-2009 LRR Technologies (Hyderabad), Pvt Ltd. All rights reserved. fullhyd, fullhyderabad, Welcome To The Neighbourhood are trademarks of LRR Technologies (Hyderabad) Pvt Ltd. The textual, graphic, audio and audiovisual material in this site is protected by copyright law. You may not copy, distribute, or use this material except as necessary for your personal, non-commercial use. Any trademarks are the properties of their respective owners. More on Hyderabad, India. Jobs in Hyderabad.