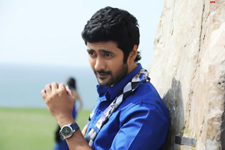 Kritika Deval / fullhyd.com
EDITOR RATING
4.0
Performances
Script
Music/Soundtrack
Visuals
5.0
4.0
6.0
5.0
Suggestions
Can watch again
No
Good for kids
No
Good for dates
Yes
Wait to rent it
Yes
Exotic locales. Fresh protagonists. Pleasant music. Family, fun and romance. There's much that Nenem Chinna Pillana gets right. All the ingredients that go onto the Telugu romcom assembly line - a pretty and immature heroine, a hero who introduces her to things beyond here current sphere of life, an eventually star-crossed romance - all exist in their proper place.

So, it is not very easy pinpoint what went wrong. You see, NCP never really intended to be a landmark of any sort. All that it intends is to entertain and to lighten the heart. All that it manages, on the other hand, is to draw the heart down towards the gravity of tedium.

Nenem Chinna Pillana? is the refrain of Swapna (Tanvi Vyas), a young girl who is part of a loaded and orthodox family in a template village. The apple of her father's eye, the girl manages to convince her father to let her go to Sweden (the probably unintentionally hilariously named Lunds University - if you get the joke your's is the filthy mind) for a year.

Hungry for new experiences, Swapna quickly strikes up a steady friendship with Krish (Rahul Ravindran), an itinerant jack-of-all-trades who takes each day as it comes, along with 5 euros for every job well done. And then, home calls Swapna, and Krish follows.

So far, the film follows the DDLJ model. Predictably, the lovers are torn apart by Swapna's traditionalist family, who will not welcome a rootless vagrant into their home. This is where the film takes a turn towards realism, and contrarily, weirdness.

The strength of Swapna's familial bonds cause Krish to realize what he has been missing in his day-at-a-time life. So he goes away. And then he comes back. And things get weirder.

The first half of the movie is bearable and somewhat fun. The banter between our lead pair, while forced, is still engaging enough that you don't take artificial pee breaks. It is fun to watch this young girl break out of her cocoon and tentatively reach out with her new wings. Despite Tanvi Vyas' overdone expressions, the character rings true. If Krish's random speechifying gets a tad annoying, we can write it off to Rahul Ravindran's deplorable diction and the writers believing the speeches to be the easiest way to establish his character.

Come the second half, and the leads are bereft of their few acting skills that they used up seeming carefree and natural. While Vyas's character remains stagnant, and stagnantly immature, Ravindran's gets as thoroughly drab as it was insistently ebullient earlier. Tollywood's family of veteran comedians works hard to keep things upbeat, but instead is beat by the redundancy of the humour, and of their own characters.

The cinematography is quite good, especially with the shots in Sweden. The music is charming, if forgettable. The editing, however, is plain sloppy, with random transitions and still more random scene changes.

All in all, Nenem Chinna Pillana is for those days when there's nothing better on TV. Even then, you'll be hard put to watch the whole thing.
Share. Save. Connect.
Tweet
NENEM CHINNA PILLANA SNAPSHOT 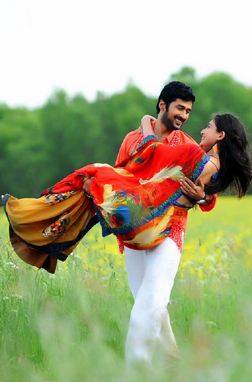 ADVERTISEMENT
This page was tagged for
nenem chinna pillana telugu movie full movie
Raghavendra Tananam Prema Geethe Chinna pillana
Nenem Chinna Pillana telugu movie
Nenem Chinna Pillana reviews
release date
Follow @fullhyderabad
Follow fullhyd.com on
About Hyderabad
The Hyderabad Community
Improve fullhyd.com
More
Our Other Local Guides
Our other sites
© Copyright 1999-2009 LRR Technologies (Hyderabad), Pvt Ltd. All rights reserved. fullhyd, fullhyderabad, Welcome To The Neighbourhood are trademarks of LRR Technologies (Hyderabad) Pvt Ltd. The textual, graphic, audio and audiovisual material in this site is protected by copyright law. You may not copy, distribute, or use this material except as necessary for your personal, non-commercial use. Any trademarks are the properties of their respective owners. More on Hyderabad, India. Jobs in Hyderabad.