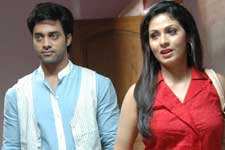 Kritika Deval / fullhyd.com
EDITOR RATING
1.0
Performances
Script
Music/Soundtrack
Visuals
1.5
1.0
2.0
2.0
Suggestions
Can watch again
No
Good for kids
No
Good for dates
No
Wait to rent it
No
Once upon a time not so long ago, in a land where supermodels from America use old Nokia phones, there was a boy. He really, really wanted to be a director. So, he finds a lecherous old producer called Murthy, genius Murthy, one and only genius Murthy; and pitches his "awesome" idea for his very first music video. And what is this "brilliant" idea that's supposed to put him in the way of that big break? A video showcasing the saree in all its varieties, on a beautiful woman. How friggin' brilliant is that?

That lil' tidbit, dear reader, paves the way for Mythri, a movie that constantly floors us with its "brilliance" until we rue the very day we were born ...or, the day P Surya Raju was born.

As we were saying, there's this boy, called Deepu (Navdeep), who pitched an idea for a music video to this producer Murthy, genius Murthy, one and only genius Murthy (Bramhanandam), who agrees to foot it on the condition that the "beautiful" girl in the video be his not-so-beautiful employee-cum-setup.

For the lack of options, Deepu agrees, and goes off to find the perfect set, which he finds in a deserted old bungalow owned by the aforementioned US-returned supermodel Mythri (whodathunk?), who just happens to fit the profile of the lead girl of his dreams.

So, as Deepu tries to get rid of the girlfriend of Murthy, genius Murthy, one (okay, okay, we'll stop), and replace her with the beauteous Mythri (Sadaf), things at the old bungalow start going bump in the night, the day, and pretty much every five minutes. How else would you know it is a scaaaaaaary movie if not for the ominous glares and the omniscient music direction and the omnipresent creepy old man?

Now, is it a conspiracy to off Mythri? Or is it a just a malevolent spirit? And how the hell did Deepu manage to collect all of the ugliest sarees in the world for his Kalanjali-ad-in-the-guise-of-a-music-video? These are the questions that form the thin-as-ice-in-spring plot of this movie.

They might not seem important to you, but they are of paramount importance to someone who had to go through about two-and-a-half hours of lame-ass dialogues, hammy acting, cinematography that looks like it has been executed by a 10-year-old, and music that sounds like it should belong in erstwhile Lamba theatre.

Navdeep tries pretty hard not to completely suck, but is helpless in the face of awful lines and an awkward screenplay. Sadaf tries just as hard to look hot, but it is the make-up and the costumes that do her in.

Bramhi should probably just retire if he gets to act only in movies that don't deserve his genius (the real kind) for comic timing. His career deserves better than this.

The rest of the cast, including Chitram Sreenu, Satyam Rajesh, and countless nameless others, unlike children, should neither be seen or heard. They obviously don't want to.

Verdict: This movie should never have been made. If you find yourself stuck in a cinema hall where the first thing you see is an ugly woman sitting on Bramhanandam's lap, we only have one advice. Run!
Share. Save. Connect.
Tweet
MYTHRI SNAPSHOT 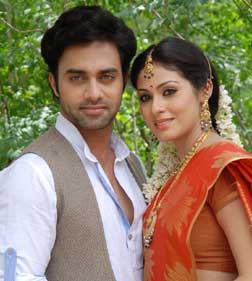 ADVERTISEMENT
This page was tagged for
mythri telugu movie
mythri telugu movies
Mythri movie story
hLALtWv6tvDPCXYEc1Vip7FxQhWx0b1tp6QXObcO22yIiISqEzb0ONI7vHpO55qADugYeBU4bApfyH-BD4LksfV_nfn0dsfOdQOAh8XI_eFjGjCKOLrSx2_hR4Erlz1W79Oos0h8qRSaDHdrymfdB550wWk_7UtccNYeCSCWsXfoI09-hklNrSrXRumpfpngrM-QISqlAYlO5eEXlwFYf3EybHO3p2IYwXjYEHnAraz0kXn-OXH8tTfqAnxEPiZqEOsXf-YXUJuZogifAH4IywLIwjxcLWBgmxkjwVWxBvQoh2bQjW8rCum8OkHDJIXeDwhRd4z507LEqR8C1czoDw
Mythri telugu movie
Follow @fullhyderabad
Follow fullhyd.com on
About Hyderabad
The Hyderabad Community
Improve fullhyd.com
More
Our Other Local Guides
Our other sites
© Copyright 1999-2009 LRR Technologies (Hyderabad), Pvt Ltd. All rights reserved. fullhyd, fullhyderabad, Welcome To The Neighbourhood are trademarks of LRR Technologies (Hyderabad) Pvt Ltd. The textual, graphic, audio and audiovisual material in this site is protected by copyright law. You may not copy, distribute, or use this material except as necessary for your personal, non-commercial use. Any trademarks are the properties of their respective owners. More on Hyderabad, India. Jobs in Hyderabad.