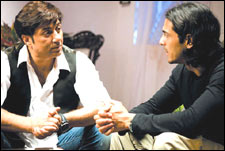 Deepa Garimella / fullhyd.com
EDITOR RATING
2.5
Performances
Script
Music/Soundtrack
Visuals
2.0
2.5
5.0
6.0
Suggestions
Can watch again
No
Good for kids
No
Good for dates
No
Wait to rent it
No
There are broadly 3 ways you can deal with your conscience once it starts lobbying for power over baser emotions in your head - agree to disagree with it; 'get away from it all', an escapist's ticket to deliverance; make an active effort to clean up the slop you strew about. A movie can scarcely hope to hold your attention if it's basing itself on No. 2 above, which is where Fox makes its first mistake.

It speaks of Arjun Kapoor (Arjun Rampal), a criminal lawyer whose profession lends itself to interminable scorching attacks by a large section of the public - larger than the one that can pay for the services of a professional like him, but whose voices hardly matter in the larger scheme of things. But, as a mysterious gloved hand that's getting ready to shoot him shows, there seems to be someone who cares.

Arjun Kapoor undergoes a sudden change of heart, hence, so does the hand. He goes away to Goa to laze around, with only his riches for company. After several months, he comes across an old man, and this meeting derails his life. Sunny Deol plays the cop who grudgingly assists him in wriggling out of a case.

Fox seems like someone's wishful effort at telling a story that ended at merely coming up with an outline. Loopholes glare vacuously, and logic takes a beating, in what is essentially a few shreds of thought strung together.

For example, when Arjun decides to publish McNemara's book in his name, it is simply too stunning for words - what exactly was the compulsion, and why couldn't he just tell the publisher that it's someone else's? Besides, wasn't it just this kind of a thing that Arjun ran away from in the first place - the ethics? The film does answer this, but it's as feeble as every other attempt it makes.

All the performances are bad. Arjun Rampal broods and broods, and you can almost see ominous grey clouds gathering mass around his head. Sunny Deol, who is introduced just before the interval, is given nothing much to salvage the film - a favour that he returns to the film, stifling several yawns in the process.

Sagarika Ghatge, who plays Arjun's girlfriend-cum-colleague, hogs a lot of reel, but the effort gone into her clothes and make-up is too obscenely high to have us expect anything amounting to an expression on her face. Neither is she smoking hot - and this is not the stylist's fault. Udita Goswami is filled with slightly more life than the leading lady, but has a futile role and a rather tiresomely 'I want to be sexy' demeanor.

With a darting camera that definitely has more activity than any of the faces on screen, the film tries its best to look thrilling. The songs have meaningless lyrics, and the music falls flat.

This one clearly needed tons more of work from every single member of the cast & crew, but the fact that they let it loose shows how much they cared. You should take the hint.
Share. Save. Connect.
Tweet
FOX SNAPSHOT

ADVERTISEMENT
This page was tagged for
Fox hindi movie
Fox reviews
release date
Arjun Rampal, Sunny Deol
theatres list
Follow @fullhyderabad
Follow fullhyd.com on
About Hyderabad
The Hyderabad Community
Improve fullhyd.com
More
Our Other Local Guides
Our other sites
© Copyright 1999-2009 LRR Technologies (Hyderabad), Pvt Ltd. All rights reserved. fullhyd, fullhyderabad, Welcome To The Neighbourhood are trademarks of LRR Technologies (Hyderabad) Pvt Ltd. The textual, graphic, audio and audiovisual material in this site is protected by copyright law. You may not copy, distribute, or use this material except as necessary for your personal, non-commercial use. Any trademarks are the properties of their respective owners. More on Hyderabad, India. Jobs in Hyderabad.