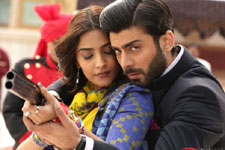 Kritika Deval / fullhyd.com
EDITOR RATING
7.5
Performances
Script
Music/Soundtrack
Visuals
8.5
6.0
7.0
7.5
Suggestions
Can watch again
No
Good for kids
Yes
Good for dates
Yes
Wait to rent it
No
Khoobsurat, touted to be the remake of a 1980 film of the same name, has as much in common with its namesake as ancient khadau slippers have with their diva-fied versions by the likes of Yves Saint-Laurent, in that both films revolve around the basic premise of a lively scatter-brain coming in to save a family from imploding into their own dullness. Apparently it took Bollywood's very own Disney princess to find the potential for an actual Disney romance in a story that is as dependable as it is cliché.

And Khoobsurat is so cliché that, if you read or watch romances at all, you can predict the entire story, to the minute, as soon as you are introduced to the characters. After all, there's only so many permutations and combinations involving a feisty heroine, a stuck-up hero, a palace, and uppity servants.

The beauty, though, of this kind of story is that all it needs is competent handling to make the kind of movie magic that turns your brain into a mushy, gooey jumble of "aww"s and "ooh"s without ever devolving into "oww"s.

Now, for the story. Dr. Mrinalini Chakravarthy (Sonam Kapoor), or Milli as she prefers to be called, is a physio-therapist called on to treat the high-and-mighty Sambhalgarh Maharaj (Aamir Raza) at his palace in, you guessed it, Sambhalgarh, Rajasthan. Pretty soon, she upsets the delicate balance at the palace that allows the dominating mother Rani Nirmala (Ratna Pathak Shah), the quiet teenager Divya (Simran Jehani), and the utterly delicious but equally stuck-up Prince Vikram (Fawad Khan) to function as a family without ever coming into contact with one another.

And, soon, even as she is putting her feet up everywhere, crushing papad into heirloom silverware, drinking with the help and fixing problems that most certainly do not concern her, she also manages to worm her way into the cold hearts of the inhabitants of Sambhalgarh with her warmth and vivacity.

Sure, this exact same sequence of events has been done by Disney, Yash Raj Films and anything published by Mills & Boons, a million times or more. However, what all these versions of the tale lack is the joy of watching Sonam Kapoor in a setting God, or billions of years of evolution, intended. With looks and a personality exactly suited to this story, Sonam Kapoor shines like a jewel, effervescent and awkward and extremely likeable all at once.

As perfect as Kapoor is for her role, Fawad Khan looks like he was plucked right out of the pages of one of those smutty historicals that none of us wants to accept that we read. While he delivers a great performance all around, we like to pretend that his existence was a spontaneous result of the existence of this film.

Ratna Pathak and Amir Raza Hussain are both excellent in their roles, with Ratna Pathak providing shocking depth to a role that is otherwise quite ridiculously caricaturish. Kirron Kher, who plays Milli's loud and open mother, is great for the most part, except when her role seems out of place in the pop-coloured fairy-land. It doesn't happen often, but it is jarring when it does.

The dialogues and the screenplay have been handled well, except towards the ending which seems too pat even for this movie. For the most part, though, director Shashank Ghosh has done a great job with breathing fresh life into a tale as old as the first person to ever figure out that people can make up stuff.

The music blends in seamlessly with the plot, and is peppy enough to make you go home and look up the soundtrack. The camera work enhances the beauty of all of the actors as well as the opulence of the setting.

Khoobsurat is extremely enjoyable if you know what you're getting going in. If you're expecting anything other than an amalgamation of Beauty And The Beast, The Princess Diaries and every YRF film ever despite having had a look at the poster; well you deserve whatever you're getting.
Share. Save. Connect.
Tweet
KHOOBSURAT SNAPSHOT 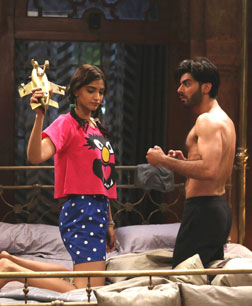 ADVERTISEMENT
This page was tagged for
Khoobsurat hindi movie
Khoobsurat reviews
release date
Sonam Kapoor, Fawad Khan
theatres list
Follow @fullhyderabad
Follow fullhyd.com on
About Hyderabad
The Hyderabad Community
Improve fullhyd.com
More
Our Other Local Guides
Our other sites
© Copyright 1999-2009 LRR Technologies (Hyderabad), Pvt Ltd. All rights reserved. fullhyd, fullhyderabad, Welcome To The Neighbourhood are trademarks of LRR Technologies (Hyderabad) Pvt Ltd. The textual, graphic, audio and audiovisual material in this site is protected by copyright law. You may not copy, distribute, or use this material except as necessary for your personal, non-commercial use. Any trademarks are the properties of their respective owners. More on Hyderabad, India. Jobs in Hyderabad.