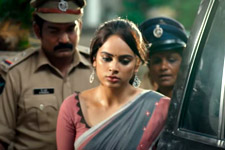 Anil Bandhakavi / fullhyd.com
EDITOR RATING
4.5
Performances
Script
Music/Soundtrack
Visuals
3.0
4.0
5.0
6.0
Suggestions
Can watch again
No
Good for kids
No
Good for dates
No
Wait to rent it
Yes
Privatisation in the education sector has its pros and cons. There's an underbelly of institutions solely in the game for the business, who focus only on areas that are in demand, and who put enormous pressure on the students for results, resulting in many students crumbling.

Akshara, written and directed by B Chinni Krishna, reiterates the importance of looking at education as an exploration of a student's virtues rather than using the student as an instrument to build a business. But while the movie takes some unexpected and interesting turns, it does not manage to rile up enough passion around its central issue.

The film begins with Sanjiv Bhargav (Sanjay Swaroop), Chairman of Vidhya Vidhan Junior College, receiving an award for excellence in education. Simultaneously, one of the students of his institution jumps off a building and takes her own life.

There is much criticism in the media about Bhargav's methods, and his ruthless commitment to profits and lack of concern for the lives of his students is revealed. His director of education, Teja (Shritej), broadcasts a message on the PA system asking the students to look at the loss of their fellow student as motivation to do better, thus demonstrating his commitment to Chairman's philosophy.

Soon after the incident, Akshara (Nandita Swetha) gets hired at Vidhya Vidhan to teach physics. She shows a very compassionate attitude to her students and gains their trust. Apart from performing her duties as a teacher, she is also very active in volunteering for social causes. Teja grows very interested in Akshara, and eventually falls for her. However, we learn that Akshara's commitment to her work unpredictably goes beyond just doing her job.

Akshara is the central figure, and her character is shown with two different aspects. On one end, she is associated with the students and staff at Vidhya Vidhan, education being her main priority. On the other, she is the hot new resident in a colony that is presided over by a goofy-looking Ajay Ghosh who has three loafers (Shakala Shankar, Madhunandhan and Satya Akkala) living with him, all three of them falling head over heels for Akshara. In this way, the movie dovetails its serious and comic angles, using them as two rails to push the story forward. Clearly this method is implemented to fulfill the appetites of a broader audience, but to their credit, the execution is quite seamless.

As the central character, Nandita Shwetha carries a lot of weight on her shoulders. However, she fails to generate the emotions required to give the story its punch, as her personality is quite limited. Sanjay Swaroop is okay as the diabolical character that he's portrayed to be.

In supporting roles, Shatru, who plays an important role as a police officer in the second half, is mostly shown walking up and down hallways in slow motion, as though he's modelling for men's attire. Harsha Vardhan is decent in delivering a couple of effective monologues that address the crux of the movie. The comedians probably outshine the rest, creating some laughter while getting their jobs done.

However, it's not fair to place the full responsibility of this movie's success or failure on the actors' performances. If the script had generated more compelling situations that had demanded more dimensions to the performances, maybe we would've had a different story to narrate.

The cinematography by Nagesh Banell is professionally done, with some shots and perspectives that grab your attention. And the background score is suitable for the mood of the movie.

Running educational institutions in a corporate fashion and the ills of that approach are not new to this country. In fact, it's an issue that is often acknowledged by many, but side-lined when more important matters take the fore. To address a problem like that one through a movie is risky, but required. The only issue is that Akshara's story ends up playing out on the side-lines as well.
Share. Save. Connect.
Tweet
AKSHARA SNAPSHOT 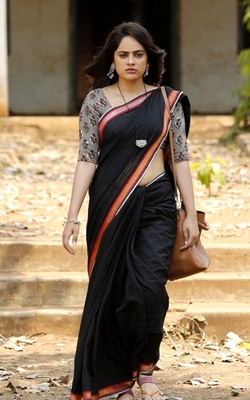 ADVERTISEMENT
This page was tagged for
Akshara telugu movie
Akshara reviews
release date
Nandita Swetha, Shakalaka Shankar
theatres list
Follow @fullhyderabad
Follow fullhyd.com on
About Hyderabad
The Hyderabad Community
Improve fullhyd.com
More
Our Other Local Guides
Our other sites
© Copyright 1999-2009 LRR Technologies (Hyderabad), Pvt Ltd. All rights reserved. fullhyd, fullhyderabad, Welcome To The Neighbourhood are trademarks of LRR Technologies (Hyderabad) Pvt Ltd. The textual, graphic, audio and audiovisual material in this site is protected by copyright law. You may not copy, distribute, or use this material except as necessary for your personal, non-commercial use. Any trademarks are the properties of their respective owners. More on Hyderabad, India. Jobs in Hyderabad.