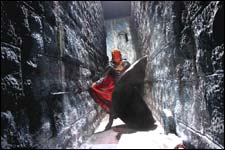 Deepa Garimella / fullhyd.com
EDITOR RATING
6.5
Performances
Script
Music/Soundtrack
Visuals
8.0
6.5
7.0
8.0
Suggestions
Can watch again
Yes
Good for kids
Yes
Good for dates
Yes
Wait to rent it
No
Mallanna banks on the supposition that all problems on earth are because the poor are poor and the rich are rich. But then, considering that money is the root of the tree called evil, is probably the easiest way to fell the tree. Both when you're making a movie, and when you're making the universe. Unfortunately, the Big Director sitting up there is in no hurry to end the show.

Actually, neither is Susi Ganeshan, Mallanna's director. Mallanna makes sure no one forgets it's a big budget movie, and tries to milk every minute of the three hours that it sweats on for.

Mallanna is the deity of a temple in a village - a deity that grants every wish every devotee makes. The deal is that a devotee must write down the prayer and tie it to the branch of a tree in the compound. Beginning with a few cases, the granting spree doesn't let up, and thousands thus throng to the temple, while non-believers are stupefied when their own 'test' prayers come true.

Most worshippers want money very desperately, and turn rich almost overnight when unidentified bags of money literally come their way. The common man sees the hand of God in all this, and the local DGP (Prabhu) merely sees the hand of a clever man. He rightly figures that plenty of milk and honey do not come by without someone getting robbed in the bargain.

He's not very wrong. Mallanna (Vikram), a CBI officer by day, turns Robinhood by night, a masked, bizarre-costumed basher-up of people who hoard money. Mallanna is no less of a crackerjack in the CBI, and dexterously leads raids on businessmen who are fattening themselves on ill-gotten affluence. One such raid leads to PPP (Ashish Vidyarthi), whose wealth can only be underestimated by calling it obscene. On confrontation, PPP fakes a paralytic attack, and the CBI has no option but to put the case on hold.

PPP puts on the act in front of even his arrogant and beautiful daughter Subbalakshmi (Shriya), who's now enraged at Mallanna. Subba then gets into a cheeky battle of mind-games with Mallanna, little knowing that he's never a step out of tune with her wits, and this forms the romantic track of the story.

Mallanna's sources of wealth are found out, by the sources themselves - the amoral rich men - who want to crush him now. From here on, the focus blends into the issue of money running into lakhs of crores of rupees being parked overseas, thus giving you an excuse to do some sightseeing around Mexico.

Mallanna is essentually about a new age, techno-savvy, V-shaped Bharateeyudu, with a difference - he's much more human than any of his previous Robinhood-cum-anti-corruption colleagues. The film never shows its protagonist as a demi-god or as an in-your-face embittered soul in a lonely and foul-tempered fight against the 'system'. Sure, going by his specialized martial art skills and astronomical levels of alertness in other action scenes, he's your regular movie hero. But when he's Superman, he has props and people - Mallanna's army of friends is also in this, and more importantly, at every night's escapade, complete with stuntmen, make-up men, and technicians.

What could undo Mallanna, despite its straightforward message entreating people to adopt poor families, is that it is way too classy to significantly rouse large swathes of people. Neither is there a local mega-star around to help underline the message. In fact, there are too many non-familiar faces in the cast. Moreover, when Bharateeyudu was released, none of us, until then, even dreamt that such a thing, i.e., tackling corruption, was even possible. Quite a few pore-cleansing movies have come up since then, and Mallanna is no path-breaker.

The treatment, however, is extremely slick, and the film's merits lie in the fact that it overdoes nothing. Everything, including the voice-overs, is extremely understated, except for Shriya's gratingly unidimensional role as a seductress with an awkward catwalk. There is no shouting, no cursing, and almost no blood - a real bolt of lightning there, actually.

Vikram is outstanding, given his histrionics, his looks, his coolth, his adeptness with the dubbing, as well as his willingness to even doll up as a woman for a scene. Krishna plays his boss, and is succesful at adding his own brand of dignity to the reels. Ashish Vidyarthi has mastered his role as a caricatured villain, and the others are good too.

Shriya's role has had way too much focus on her look, but she sizzles on screen. The shocker of the moment is Mumaith Khan, who had better have some justification for being so scandalous - while technically playing herself.

The visuals are fashionably sleek, but with one hell of a distracting close-up camera that is moved around like it were sitting on a flitting lizard's back. Mexico has been adeptly captured too.

The songs have been around for months now, with 'Excuse Me' having even tipped over the fatigue point, but they're refreshing to watch. Vikram lending his voice to many of them, is quite an enhancement.

Well, it's been long since we saw the good guys consistently act much smarter than the bad guys. And for that alone, Mallanna comes out a winner.

RATING
8
Krishna on 31st Aug 2009, 9:53am | Permalink
2 words for you - stay away! Even Shriya's well-rounded assets on display are not worth this torture.


Pros: Nothing
Cons: Lousy music, a vulgar Shriya and a wasted Vikram

ADVERTISEMENT
This page was tagged for
Mallanna telugu movie
Mallanna reviews
release date
Vikram, Shriya
theatres list
Follow @fullhyderabad
Follow fullhyd.com on
About Hyderabad
The Hyderabad Community
Improve fullhyd.com
More
Our Other Local Guides
Our other sites
© Copyright 1999-2009 LRR Technologies (Hyderabad), Pvt Ltd. All rights reserved. fullhyd, fullhyderabad, Welcome To The Neighbourhood are trademarks of LRR Technologies (Hyderabad) Pvt Ltd. The textual, graphic, audio and audiovisual material in this site is protected by copyright law. You may not copy, distribute, or use this material except as necessary for your personal, non-commercial use. Any trademarks are the properties of their respective owners. More on Hyderabad, India. Jobs in Hyderabad.