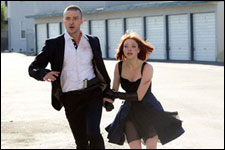 Shruthi / fullhyd.com
EDITOR RATING
7.5
Performances
Script
Music/Soundtrack
Visuals
8.0
7.0
7.0
6.0
Suggestions
Can watch again
No
Good for kids
No
Good for dates
No
Wait for OTT
No
It's not often that a sci-fi movie gets you thinking. No, that's not on the checklist of today's lot. And in that sense, In Time isn't just a sci-fi movie. It goes beyond. It not just touches upon themes of the future, it also seems to lead you right into the middle of today's issues. And in doing so, the film sometimes struggles under the weight of all the issues it has taken up.

The movie is set in a world of the future, where the ageing gene has been modified to stop ageing at 25, after which people receive a year, and the countdown to death starts. Time is the new currency, and productive work is paid with time. Coffee is 4 minutes, a taxi ride 2 hours. People must buy/earn time to live longer than a year after 25. The setting for a new class system.

Will Salas (Justin Timberlake) plays a regular guy living in the poorer time zone of this world. He and his mom (Olivia Wilde) earn their time by the day, like most other people in the ghetto. Here, a few days on the clock are a luxury and people can kill for a month.

One day at a bar, Will meets a millionaire (Henry Hamilton, played by Matt Bomer) who has over a century of time on him, and is intent on squandering it away. After the night's events, Will finds himself the next morning with the millionaire's time, and as luck would have it, is also accused of murdering him.

Will's newly acquired riches earn him entry into the richer time zones, where he meets Philippe Weis (Vincent Kartheiser) and his daughter Sylvia Weis (Amanda Seyfried) at a poker game. However, his indulgence is short-lived as the Timekeeper Raymond Leon (Cillian Murphy) catches up with him. And then begins a chase in which each character is confronted with the systems in the world and their place in it.

The film touches upon one too many issues. All so solid, that the characters seem to be torn about which ones to address. The cast do a good job, though - especially Justin Timberlake (who lends authenticity to his role) and Cillian Murphy (deftly handling the grey character). Amanda Seyfried, as the over-protected yet rebellious daughter, looks out of place in some sequences, but manages to hold her own.

The music, composed by Craig Armstrong, is good and gels quite well with the movie. For a sci-fi film, this is a good one - intelligent and fast-paced. Yet it fails to closely examine the issues and questions it raises. Much like starting a great debate and then leaving it unfinished. But you didn't go for the debate, did you?
Share. Save. Connect.
Tweet
IN TIME SNAPSHOT

ADVERTISEMENT
This page was tagged for
In Time english movie
In Time reviews
release date
Justin Timberlake, Amanda Seyfried
theatres list
Follow @fullhyderabad
Follow fullhyd.com on
About Hyderabad
The Hyderabad Community
Improve fullhyd.com
More
Our Other Local Guides
Our other sites
© Copyright 1999-2009 LRR Technologies (Hyderabad), Pvt Ltd. All rights reserved. fullhyd, fullhyderabad, Welcome To The Neighbourhood are trademarks of LRR Technologies (Hyderabad) Pvt Ltd. The textual, graphic, audio and audiovisual material in this site is protected by copyright law. You may not copy, distribute, or use this material except as necessary for your personal, non-commercial use. Any trademarks are the properties of their respective owners. More on Hyderabad, India. Jobs in Hyderabad.