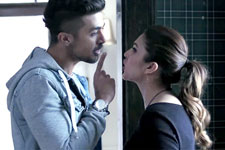 Vaishnavi Kulkarni / fullhyd.com
EDITOR RATING
2.0
Performances
Script
Music/Soundtrack
Visuals
2.5
3.5
1.0
2.0
Suggestions
Can watch again
No
Good for kids
No
Good for dates
No
Wait for OTT
Yes
Horror is a tricky genre to handle - it relies on human psychology almost as much as it does on plot. Making a horror movie is like brewing a potion with exactly the right blend of suspense, jump-scares, gore and mystery, all laced with a play on basic human emotions and fears. Mess up any of the ingredients by even the slightest margin, and it's all likely to blow up in your face.

Some films of the genre will have you screaming and clutching your heart in the theatre, but will fade from memory soon after you exit. Others - the ones that make their benchmark - worm their way into your psyche, so deep that you will still feel a twinge of fear when the lights go out or you hear the creak of a door, years later. Sadly, the only thing Dobaara makes you terrified of is wasting three hours watching another film as abysmal as this one.

Dobaara: See Your Evil is a movie full of characters that look for the worst possible course of action to deal with a situation at hand and unfailingly go through with it, after which they consistently regret their deeds. Aside of the obvious reason for the title of the movie (which becomes clear as it progresses), the name is made relevant by the characters repeatedly making poor decisions, over and over again.

Adapted from the (far better) American horror film Oculus, Dobaara follows the actions of siblings Natasha (Huma Qureshi) and Kabir Merchant (Saqib Saleem) as they take a trip down memory lane with a haunted mirror that had destroyed their family when they were children.

Right off the bat, the characters begin to violate every single tenet (or, you know, common sense) that horror enthusiasts learn at the outward-facing feet of the ghosts they watch - in the sepia-toned flashbacks, their father Alex Merchant (Adil Hussain) decides that buying an ugly antique mirror (that looks like it may have belonged to Snow White's stepmother at some point) is a brilliant idea. That very night, when spooky music starts playing for no apparent reason, instead of taking the cue and chucking the mirror into the ocean like any sane person would do, Alex deems it best to allow the spirit to continue enjoying her midnight melodies.

Back in the present day, Natasha has blackmailed Kabir into returning to their childhood house of horrors by referring to an obscure promise, and much like in the cases of the promises you make when you are drunk and disorderly, Kabir regrets making his now that he is in his right mind. Unfortunately, Natasha is not. When confronted with a malevolent spirit capable of the kind of Jedi mind control that would put Darth Vader to shame, Natasha prefers to bring it over for a tete-a-tete and a light photoshoot 11 years later with no regard for her little brother's mental health.

Natasha, with no knowledge of how court proceedings and acquittals work, wants the world to know that a haunted mirror was responsible for the murders that tore her family asunder, and clear Kabir's name. Her intentions are noble, but her execution is rather questionable given that despite taking numerous precautions to ensure their safety, she forgets about Edison's gift to the world and opts for stumbling around a creepy old house in the darkness. At this point, it's hard to fault the ghost for wanting to kill the pair.

The movie alternates between the two time periods, and the puzzle of the Merchant family tragedy gets put together piece by piece. The story is fairly intriguing, though it leaves a lot to be desired. The cast, however, butchers the performances so badly that any interest you may feel is lost amidst your own annoyance. The movie stills are visually dark and confusing, while the music ensures that you will leave the theatre wanting an aspirin for the headache it gives you.

We watch as the ghost, Anna (played by Madalina Ion, whose resemblance to Eva Green is rather frightening - but that's the extent of her fear factor), seduces Alex, causing his marriage with Lisa (Lisa Ray) to crumble and laying the groundwork for the blood to be spilt. Anna also continues to terrorise the now-grown siblings, making them doubt their own senses and perceptions with deadly hallucinations. The conclusion is derivative and utterly predictable, its sole plus being that it signifies the end of the film.

Dobaara: See Your Evil exploits the primal fear of being unable to differentiate between reality and imagination, and the fear of delusions, hallucinations and losing control over your own actions, and a few of the initial scenes are genuinely suspenseful. However, it devolves far too soon into a film that is more of an unintentional parody of its genre. The evil spirit is practically comical in her corporeal form - Jack and the Beanstalk must have been her favourite bedtime story, because "Fee Fi Fo Fum, I smell an Englishman" is her go-to catchphrase (Adil Hussain modifies it a bit to keep up with current social media lingo - he pronounces the latter part of the verse to rhyme with "Fee Fi Fo Fam").

Huma Qureshi's acting is affected and over-the-top, and she ends up looking like she is trying too hard. Saqib Saleem remains stony-faced, his voice devoid of emotion, reciting his lines with all the gusto and rhythmic enunciation of a primary schooler reading poetry. Lisa Ray is adequate as the worried and frightened mother, and depicts her fear, protectiveness and motherly love fairly well. Her Hindi is rather grating, though. Adil Hussain looks less like a man possessed and haunted by a murderous spirit and more like a man who is practicing his poker face for an extended trip to Vegas.

Dobaara: See Your Evil is an utter waste of time, and the only real evil shown here is that of the filmmakers in inflicting this travesty on innocent filmgoers and horror aficionados.
Share. Save. Connect.
Tweet
DOBAARA: SEE YOUR EVIL SNAPSHOT 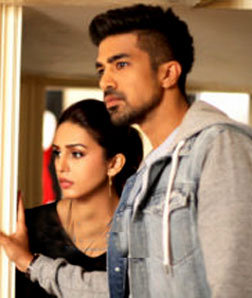 ADVERTISEMENT
This page was tagged for
Dobaara: See Your Evil movie online
Dobaara: See Your Evil hindi movie
Dobaara: See Your Evil reviews
release date
Huma Qureshi, Saqib Saleem
Follow @fullhyderabad
Follow fullhyd.com on
About Hyderabad
The Hyderabad Community
Improve fullhyd.com
More
Our Other Local Guides
Our other sites
© Copyright 1999-2009 LRR Technologies (Hyderabad), Pvt Ltd. All rights reserved. fullhyd, fullhyderabad, Welcome To The Neighbourhood are trademarks of LRR Technologies (Hyderabad) Pvt Ltd. The textual, graphic, audio and audiovisual material in this site is protected by copyright law. You may not copy, distribute, or use this material except as necessary for your personal, non-commercial use. Any trademarks are the properties of their respective owners. More on Hyderabad, India. Jobs in Hyderabad.