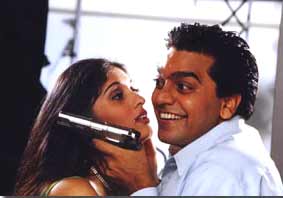 Kiran Nadella / fullhyd.com
EDITOR RATING
6.0
Performances
Script
Music/Soundtrack
Visuals
NA
NA
NA
NA
Suggestions
Can watch again
NA
Good for kids
NA
Good for dates
NA
Wait to rent it
NA
Danger is a provocative thriller that offers a grab bag of genres (gangster flick, sexy romance, crime caper) and tops it all off with "steamy" passion between Unnati (mistress of Nainesh) and a not-so-ditzy ruffian named Saurav. Simultaneously violent, funny and riveting, the film is sure to test your tolerance for bloodshed.

The story in short: Desperate to break away from the Mob's influence and live happily ever after, audacious dame Unnati (Tara Deshpande), with the help of her aficionado Saurav (Jas Arora), hatches a plot to steal Rs. 2 crores of mafia money. Their scheme runs into a series of escalating complications, until their very survival depends on split-second timing and criminal ingenuity.

Okay now, let's dig into the details. Saurav is a ruffian who has just got out of prison. He moves into an apartment next door to Nainesh, a money launderer for the mob, and his mistress Unnati. Unnati, who is perhaps not quite as unswerving as Nainesh would like her to be, soon embarks on a fiery relationship with Saurav. The two have chemistry to burn; they play the intimate scenes in a wonderful tongue-in-cheek manner, going for the 'fun' aspect of it.

This is all out of the way fairly quickly. We've established that they're a secret couple, and now the fun begins. Nainesh has Rs. 2 crores in his apartment, which is being picked up the following day. Unnati wants out and the money, and to get it she needs Saurav's help. They hatch a plan and get a-thinking, but as always something goes wrong. This time?

It turns out that Nainesh is more intelligent than they gave him credit for. A series of tense circumstances follows, which ensures that the suspense is kept up at a comfortably intense level till the end. And guess who gets all that money in the end?

The story twists and turns unpredictably, and the brilliantly quirky cinematography, a first-rate background score and seamless editing add to the fun. The dialogues are superb, but only from time to time.

Yet, the movie is not without its shortcomings; asymmetrical bursts of performances impart the movie a tinge of uncalled for incoherent flavor, which none of the middle-of-the-road moviegoers can put up with.

There's an edgy, over-the-top performance by Ashutosh Rana as a gleefully sadistic mobster's accountant; he makes his scenes crackle with barely contained malice, and proves once again that he's a highly capable actor with a commanding on-screen presence. Performances from others are of no consequence, just like the directorial talent of Vasant Chedda.

In summary, the film could have been a cult, but what it is ultimately is worth a watch.
Share. Save. Connect.
Tweet
DANGER (HINDI) SNAPSHOT

ADVERTISEMENT
This page was tagged for
dengarhindimovie
Ashutosh Rana movie danger
honor movies diwnload
danger movie ashutosh rana movie diwnload
hindi movie Danger
Follow @fullhyderabad
Follow fullhyd.com on
About Hyderabad
The Hyderabad Community
Improve fullhyd.com
More
Our Other Local Guides
Our other sites
© Copyright 1999-2009 LRR Technologies (Hyderabad), Pvt Ltd. All rights reserved. fullhyd, fullhyderabad, Welcome To The Neighbourhood are trademarks of LRR Technologies (Hyderabad) Pvt Ltd. The textual, graphic, audio and audiovisual material in this site is protected by copyright law. You may not copy, distribute, or use this material except as necessary for your personal, non-commercial use. Any trademarks are the properties of their respective owners. More on Hyderabad, India. Jobs in Hyderabad.