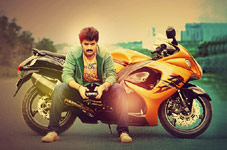 Ravi Kandala / fullhyd.com
EDITOR RATING
2.0
Performances
Script
Music/Soundtrack
Visuals
5.0
1.0
3.0
2.0
Suggestions
Can watch again
No
Good for kids
No
Good for dates
No
Wait for OTT
No
So the heroine Nandini (Sonal Chauhan) clicks twenty selfies as soon as she wakes up. And then takes a camera and goes out clicking pictures. She spots a small paper flag flying in the air and sees a guy on a bike chasing it. The guy catches the flag and the heroine clicks a pic of the hand and the flag. The picture helps her win a national photography championship. She then tells her family that she loves the guy for the respect he has for the national flag and his national integrity (!&$#@%#$%).

We had a nagging suspicion right since the titles of Sher rolled that no one was really interested in the film. By no one, we mean neither the director nor the producer nor the cast nor the technicians. When the aforementioned scene rolled in, our suspicions were confirmed. We've seen bad love stories, but falling in love because of national integrity (!*&#%#I%) just took the cake.

Sher stars Nandamuri Kalyan Ram in yet another of his revenge sagas. He plays Goutham, a young man who works (LOL) in his dad's construction business. His family loves him unconditionally (read in the nauseating manner that members of filmi families love each other). Once Goutham saves a bride from a gangster Munna and helps her get married to the guy he loves. And Munna challenges Goutham that he'll steal the love of Goutham's life and get married to her.

Once Nandini and Goutham fall in love, Munna goes to Nandini's house and tells her father (who's the ACP) that he intends to marry her. The ACP tells Munna that he'll gladly get his daughter married to him if Munna helps him become the DGP. Goutham then goes to the ACP and tells him that he'll finish off Munna and the mafia dons behind him (who include Ashish Vidyarthi, Mukesh Rishi and Shafi) so that the ACP can take the credit and become the DGP. Why Goutham agrees to take up this mission is revealed in a convoluted flashback, the likes of which we've seen in every Kalyan Ram movie so far.

Sher, like we mentioned earlier, seems like a movie that no one was truly interested in. Take all the clichéd character introductions, for example. The ACP says that there must be a missile with a moustache somewhere who will end the reign of Dada (Mukesh Rishi) and his goons - cue for Kalyan Ram to enter. Then some random character asks where the girl is that the hero and the villain will fight for - cue for the heroine to enter. Then some other random character says "call my disciple Ranjitha to relieve the tension" - cue for the item girl.

Then, some of the dialogue makes you cringe. Here's a couple of things that the villain asks a guy he's about to kill: 200 people died of a sunstroke, so why didn't you arrest the sun? And the Tsunami killed more than a 1,000 people, so why didn't you arrest the sea? This we assume was the most the dialogue-writer could dream up - he calls himself Diamond Ratnam after all.

But what makes Sher terrible is that just nothing in the film works - the action is generic, the script is clichéd, the emotions do not touch a chord, the comedy fails to make you laugh, and the technical values are sad. The movie starts off on a stale note, and at no point does it manage to either draw the viewer into the plot or make you feel for any of the characters. And it uses top-notch actors for bit parts - Rao Ramesh, Rohini, Ashish Vidyarthi, Mukesh Rishi, Ali, "30 years" Prithvi... none of them gets more than two scenes, and they are all completely wasted.

The emotions depicted are also strange - Kalyan Ram's brother is murdered and mother admitted to a hospital, but he decides not to tell his dad. His dad, too, never wonders where his wife and younger son are for nearly a month. Such scenes are aplenty, and further serve to disillusion the viewer.

The film is technically challenged. Everything from the stunts to the cinematography to the music is of a poor standard. Clearly, not much money was spent on anything (though considering that the movie won't make much, that might not be a bad thing). The actors ham like there's no tomorrow, making soaps on TV appear better.

And at the end, we were also wondering what animal or language the Nandamuri clan would turn to next, given they've now finished Simha, Lion and Sher. (And if that sad joke were a line in the movie, it would have easily made it to one of its best.)
Share. Save. Connect.
Tweet
SHER SNAPSHOT 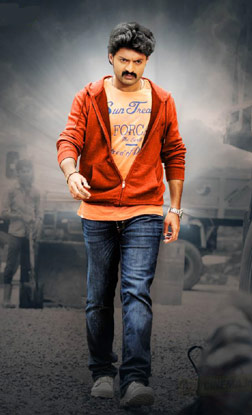 Heroine falling in love for the guys national integrity is epic.
RATING
1
lingam returns on 31st Oct 2015, 2:46pm | Permalink
The guy who set the template for such movies should be hanged to death
rahulsachinsourav123 on 31st Oct 2015, 1:05pm | Permalink
Brilliant review...kudos Ravi. This is why I love to visit fullhyderabad reviews time and again, can't stop laughing all through reading :) Though they get their overall ratings wrong occasionally for superstar movies (of course it is my perception), they are unique in their own way, understands the psyche of movie goers, empathizes with them nicely, besides weaving fun elements around review comments :)

ADVERTISEMENT
This page was tagged for
Sher telugu movie
Sher reviews
release date
Nandamuri Kalyan Ram, Sonal Chauhan
theatres list
Follow @fullhyderabad
Follow fullhyd.com on
About Hyderabad
The Hyderabad Community
Improve fullhyd.com
More
Our Other Local Guides
Our other sites
© Copyright 1999-2009 LRR Technologies (Hyderabad), Pvt Ltd. All rights reserved. fullhyd, fullhyderabad, Welcome To The Neighbourhood are trademarks of LRR Technologies (Hyderabad) Pvt Ltd. The textual, graphic, audio and audiovisual material in this site is protected by copyright law. You may not copy, distribute, or use this material except as necessary for your personal, non-commercial use. Any trademarks are the properties of their respective owners. More on Hyderabad, India. Jobs in Hyderabad.