G I Joe - The Rise Of Cobra Review 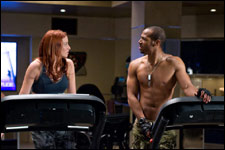 Samrat Sharma / fullhyd.com
EDITOR RATING
6.5
Performances
Script
Music/Soundtrack
Visuals
6.5
5.5
8.0
9.0
Suggestions
Can watch again
Yes
Good for kids
Yes
Good for dates
No
Wait to rent it
No
This is the second toyline-based live action film in as many months, and frankly, that's ridiculous. Beyond righteous indignation, though, G. I. Joe: The Rise of Cobra is a fun action film that is nothing more than a series of action set-pieces strung together with minimal explanation. And Stephen Sommers makes it all work.

If you caught the trailer at any time before the release, you'd think what I thought - there's no way this can work. Trust me - it does. Sommers gets the tone of the film just right, and realizes that this is one big silly excuse to see toy soldiers bang against each other. On one hand he rarely devolves into the self-referential style that would spoil this film, and on the other he acknowledges the silliness of the concept and runs with it in all earnestness.

Part of the reason the film works is that it establishes the James Bond style fluff of super-secret bases and world domination villains and straight American heroesâ„¢, in a way that we are all in on the conceit, and then plays it straight. Sommers does not add over-grittiness to the film, as is easy to do, and yet maintains a straight-facedness about the proceedings, just enough to make them work. Beyond that it's all action all the time, and that is awesome.

And Stephen Sommers shows that he knows how to shoot action scenes. No confusing camerawork, no bland boring shots of what may be cool - this is pure action delivered in really cool fashions. He sets up the range of the action clearly, and clues the viewers in on what is happening. This should be fairly simple, but time and again action directors have failed us on this simple ask.

This is not to say the action isn't any good - the set pieces are excellently mounted, and the shot selection and framing on these is impeccable. What also makes them this fun to watch is the fact that Sommers refuses to use the same thing again. Hand to hand, epic explosions, cool underwater battles, car chasesâ€¦ he employs everything his script can offer to create entertaining set pieces. Plot is really the stuff here that is used to start or cool off an action set piece. Beyond that, no one seems to care that there's hardly one.

Playing a large part in making all this is enjoyable is the fact that each of the characters has something to do in each of the scenes. This gives these scenes a kind of urgency and the overall epic scale they need. It also helps that a large part of the cast comprises real actors. While Eccleston, Gordon-Levitt, Miller, Pryce and Vosloo aren't exactly doing career best work here, they are credible actors who know what they are supposed to do - namely, keep the charisma on, and deliver suspension of disbelief. They do so in spades, and make the action sing.

The action (which really is the film in its entirety) isn't without fault, though. The CGI is serviceable in some parts, but downright shoddy in others. While the overall fake quality of the CGI lends itself further to the cartoonishness of the film which it is gaining for, there are scenes that are laughably low-rent. I often nitpick on the CGI of such films, but when they create a great big blockbuster whose remit is to deliver these effects alone, you have to question when they don't.

Despite that, however, the film remains the kind of silly fun a summer action film should be. It reinforces that we still miss a good superhero yarn (after last year's one two punch of Iron Man and Dark Knight, this year's Wolverine has been the kind of disappointment Shaan was after Sholay), and that we are willing to be swayed by the right amount of fun at the cinemas, so long as that promise is kept.

It's a fun, delightful action film, and exactly the kind of light violent adventure that we craved all summer. While this isn't the sort of movie that needs all your brain faculties, it is still the kind that doesn't insult them at regular intervals.
Share. Save. Connect.
Tweet
G I JOE -... SNAPSHOT
G I JOE - THE RISE OF COBRA SNAPSHOT

ADVERTISEMENT
This page was tagged for
G I Joe - The Rise Of Cobra english movie
G I Joe - The Rise Of Cobra reviews
release date
Adewale Akinnuoye-Agbaje, Christopher Eccleston
theatres list
Follow @fullhyderabad
Follow fullhyd.com on
About Hyderabad
The Hyderabad Community
Improve fullhyd.com
More
Our Other Local Guides
Our other sites
© Copyright 1999-2009 LRR Technologies (Hyderabad), Pvt Ltd. All rights reserved. fullhyd, fullhyderabad, Welcome To The Neighbourhood are trademarks of LRR Technologies (Hyderabad) Pvt Ltd. The textual, graphic, audio and audiovisual material in this site is protected by copyright law. You may not copy, distribute, or use this material except as necessary for your personal, non-commercial use. Any trademarks are the properties of their respective owners. More on Hyderabad, India. Jobs in Hyderabad.