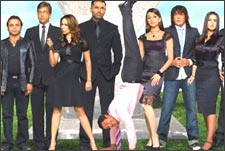 Deepa Garimella / fullhyd.com
EDITOR RATING
3.5
Performances
Script
Music/Soundtrack
Visuals
7.0
4.0
5.5
5.5
Suggestions
Can watch again
No
Good for kids
No
Good for dates
No
Wait for OTT
Yes
Daddy Cool could have been real fun. But it's like that group project that goes bust because of one member who has no business being in the team in the first place. It's one thing to have your movie indiscriminately strewn with the word 'condom' and with people purposefully kicking others in the wrong places. But when crap - the actual thing - becomes the basis for a full-blown joke, it rattles the mind, enough to have that one gag cloud the rest of your experience.

Reportedly based on a Hollywood offering called Death At A Funeral, Daddy Cool is like Wodehouse gone very bad. It speaks of a gaggle of semi-twits who happen to bunch up at the funeral of Douglas Lazarus (Sharat Saxena), the father of Stephen Lazarus (Suneil Shetty). Stephen is anxious to see it all go well, especially since he's delivering the farewell speech, and his wife Nancy (Aarti Chhabria) bearing down on him to move out of their ancestral house after the funeral, away from his mother (Suhasini Mulay), is not helping matters.

There is also the niece Maria (Tulip Joshi) of the departed, who arrives with her boyfriend Michael, an otherwise sober gentleman momentarily wrecked by an accidental dope intake, and also with her junkie brother Harry (Chunkey Pandey). Carlos (Javed Jaffrey), a cousin of the breed, drives up with his distrustful wife (Kim Sharma), his friend (Vrajesh Hirjee) and his wheel-chaired sourpuss of an uncle Murphy (Prem Chopra). And lastly there's Stephen's smug writer-brother, Brian (Ashish Chowdary).

Hell's gates are already half open by now, but what really bursts them wide open is a pocket-sized mourner called Andrew (Rajpal Yadav), who unnerves the family with his silent unfamiliar presence first, and then with some news.

Daddy Cool has three or four layers of comedy. One consists of well-done slapstick, like the entire character graph of the uncontrollably hallucinating, blabbering Michael - it has a no-holds-barred nuttiness that needs perfect timing and a little dash of intelligent humour. The film is not just about slapstick all the way - there are some witty moments that centre around decently-written lines, and that succeed.

Then, there's a whimpering attempt at super-subtletly, like that joke that goes on throughout the movie but never works - the one about the dead man's speed on the treadmill before he died.

There's a heavy dose of adult humour as well, with not even an attempt at disguise. But the lowest, of course, is when taste is bombarded out of the window, with that one moment that inexplicably found its way into the film - when an elderly man poops on someone's hand. Well, that must have been the first for any film. The film has a gay angle too, that could evoke a few winces, but after the joke above, you can stomach just about anything else.

The cast is an ensemble of B-listers, who all act with surprising energy and timing. Suneil Shetty, with an anchor-like role, is comic in his very seriousness, and Javed Jaffrey and Vrajesh Hirjee do great with an overdone Goan accent. And Aftab carries his crazed character really well. Rajpal Yadav, though, is a matter of personal taste.

The women are nothing to write home about, but they are all right, though Sophie Choudry's role is hardly needed.

A completely indoors film, Daddy Cool props up the story inside a quaint Victorian-style house, with everyone dressed in black. The visuals are not exactly glitzy, but they do qualify as being 'not drab'. There's not much by way of music, except for a soundtrack that ads pace to the narrative.

Like we said, Daddy Cool could have been real fun, but because it needs you to be made of stronger stuff, it is not.
Share. Save. Connect.
Tweet
DADDY COOL SNAPSHOT

ADVERTISEMENT
This page was tagged for
Daddy Cool hindi movie
Daddy Cool reviews
release date
Suniel Shetty, Aftab Shivdasani
theatres list
Follow @fullhyderabad
Follow fullhyd.com on
About Hyderabad
The Hyderabad Community
Improve fullhyd.com
More
Our Other Local Guides
Our other sites
© Copyright 1999-2009 LRR Technologies (Hyderabad), Pvt Ltd. All rights reserved. fullhyd, fullhyderabad, Welcome To The Neighbourhood are trademarks of LRR Technologies (Hyderabad) Pvt Ltd. The textual, graphic, audio and audiovisual material in this site is protected by copyright law. You may not copy, distribute, or use this material except as necessary for your personal, non-commercial use. Any trademarks are the properties of their respective owners. More on Hyderabad, India. Jobs in Hyderabad.