The Nutcracker And The Four Realms Review 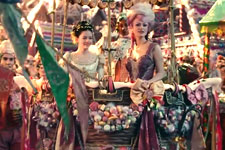 Sonali Dabade / fullhyd.com
EDITOR RATING
5.0
Performances
Script
Music/Soundtrack
Visuals
5.0
5.0
6.0
6.0
Suggestions
Can watch again
No
Good for kids
Yes
Good for dates
No
Wait to rent it
No
Way back in 1816, German author E T A Hoffmann wrote a fantasy story called The Nutcracker And The Mouse King. Decades later, Russian choreographers Marius Petipa and Lev Ivanov adapted this story into a two-act ballet. With music by Pyotr Ilyich Tchaikovsky, this production opened to unflattering reviews and heavy criticism. However, years later, the story emerges once again, this time as a movie that is a retelling of the combination of the ballet and the story itself. Perhaps the makers wanted to change how history saw this story. Perhaps they tried to bring a new tang to it. Sadly, history remains unchanged.

Clara Stahlbaum (Mackenzie Foy) is different from all other girls her age. She loves physics, she hates dancing, and she resents her father (Matthew Macfadyen) for who he has become after her mother's death.

One Christmas Eve, Clara's father hands her and her siblings Christmas gifts from their mother. Clara receives an egg-shaped box that is locked. On further inspection, she finds that it has been created by Drosselmeyer (Morgan Freeman), her godfather. But Clara is discouraged because the box needs a key to open it and her mother hasn't given it to her.

When the Stahlbaum family heads over to Drosselmeyer's for a Christmas party, Clara, by way of Drosselmeyer's Christmas gift to her, is transported into a world that her mother once ruled and where the lady is respected even now. With three realms of that world being in conflict with the fourth, people look up to Princess Clara to save them from the annihilation that awaits them. Whether Clara finds the key and whether she will be able to save the parallel world from destruction forms the rest of the story.

Disney movies are almost always filled with cuteness and rich technical and emotional values. They have the power to take you back to your childhood with the added bonus of getting the younger audiences to learn the intended lessons almost immediately. But every now and then comes a movie that makes you wonder how Disney picked up a project with such a lack of a well-rounded script.

It isn't that The Nutcracker And The Four Realms is mind-numbingly bad. It has its moments of Disney finesse peeking out of the veil of clichéd philosophy. But when the movie is filled with "I need to get the key" and "It is my fault", there is not much that stops it from getting classified as just a wannabe Disney film. Predictability is a standard from beginning to end. And the least memorable part of the movie is the titular Nutcracker (Jayden Fowora-Knight), which says a lot about the film's priorities.

The script is hollow and confused in itself, and so all the reshoots that it took to bring the film to this don't really help. There are some clownish appearances that will annoy the realms out of you. And the stars in the movie make you wonder why they took it up - a retelling of a classic story most likely looked amazing on paper.

The performances, just like the story they are trying to portray, are confusing. Keira Knightley is equal parts charming and terrifying as the Regent Sugarplum. Her performance is the one that stands out in the medley of what looks like unsupervised acting for an imperfect script. You would expect that Mackenzie Foy, with an impressive repertoire of films at her 17 years, would be great as Clara. But the full strength of her acting capabilities isn't harnessed in here, which is a shame because Interstellar showed us the range of her acting chops.

The supporting cast also act like they are merely going through the motions because they've signed up for it. There's Helen Mirren, who in her limited role shows all the grit that could perhaps be mustered in that time. Then there's Matthew Macfadyen, the brooding father who believes in using slightly complicated metaphors to try to teach his daughter about life and lost love. Even the comic relief that appears is brief and forced - though it could be argued that maybe a fantasy-adventure film such as this could do with as litle comedy as possible.

The music is standard Disney fare. However, it is enhanced by the presence of the beautifully choreographed ballet performed by Misty Copeland. Veteran composer John Newton Howard lends his genius to this film, but it becomes too much for a movie with a haphazard script and underwhelming acting. The sets and production design capture the essence of Victorian London, making it pretty to look at. But that's all the movie tends to be - a pretty picture.

All in all, The Nutcracker And The Four Realms is a mediocre attempt to revive the age-old story, and apart from a few amazing scenes, is merely predictable and seems to have been made just to ensure Disney has 'em all covered.
Share. Save. Connect.
Tweet
THE NUTCRACKER AND THE... SNAPSHOT
THE NUTCRACKER AND THE FOUR REALMS SNAPSHOT 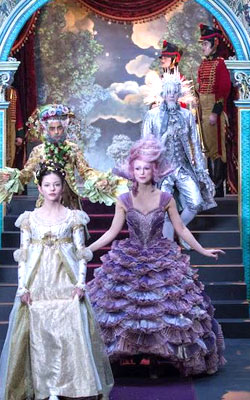 ADVERTISEMENT
This page was tagged for
The Nutcracker And The Four Realms english movie
The Nutcracker And The Four Realms reviews
release date
Mackenzie Foy, Keira Knightley
theatres list
Follow @fullhyderabad
Follow fullhyd.com on
About Hyderabad
The Hyderabad Community
Improve fullhyd.com
More
Our Other Local Guides
Our other sites
© Copyright 1999-2009 LRR Technologies (Hyderabad), Pvt Ltd. All rights reserved. fullhyd, fullhyderabad, Welcome To The Neighbourhood are trademarks of LRR Technologies (Hyderabad) Pvt Ltd. The textual, graphic, audio and audiovisual material in this site is protected by copyright law. You may not copy, distribute, or use this material except as necessary for your personal, non-commercial use. Any trademarks are the properties of their respective owners. More on Hyderabad, India. Jobs in Hyderabad.