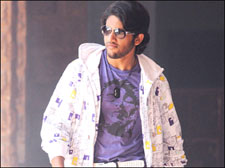 EDITOR RATING
6.5
Performances
Script
Music/Soundtrack
Visuals
7.0
7.0
6.0
8.0
Suggestions
Can watch again
Yes
Good for kids
Yes
Good for dates
Yes
Wait for OTT
No
Urban legend has it that sometime in the 1980s, the exclusive-to-a-fault Bombay Club refused membership to Dhirubhai Ambani since he did not have the lineage needed, but gave membership to his sons since they had the lineage needed. Indeed, for some people, several battles are won right when they are born, and for Naga Chaitanya, his destiny came stapled with his birth certificate - all he has to do is follow the assembly instructions for his career. And with Josh, he gets off to a predictable start.

As someone with impeccable lineage on both sides of the family tree, Naga Chaitanya has the best of Tollywood talent framing him in his debut venture. With "Dil" Raju producing, the movie is visually opulent, the production values are clamouring for attention, most dialogues rock, the plot is almost (gasp!) intelligent, there are several of both awww and kewww moments, and the comedy is minimum guarantee. Sandeep Choutha creating the music means that there is at least a respectable base case scenario. And the entire PR machinery of the Akkineni and Ramanaidu clans pitching its mite means that the marketing arsenal is bursting at the seams.

So, yes, Josh is an enviable debut for the star kid. With a work-in-process actor (yes) at the helm, it still manages to keep your mind from drifting to various other things your mind usually drifts to. Perhaps more imporantly, at least for the critics, it manages to do this while not shamelessly pandering to some of the abhorrences of college students. In contrast to Dil, which earned producer Raju his now famous salutation, and which saw him remorselessly use the irreverence of college students for elders as its primary gravitas, Josh has a benevelont message.

Satya (Naga Chaitanya) quits UG college in Vizag to land in Hyderabad, where he takes up a caretaker job at a nursery. There's aggression and a flashback constantly looming as he dodders around doing nothing and making pithy observations marinating in their own brevity, and when he finally files a complaint in a police station as a witness to public violence by the students of MMR College against motorists and public property, he gets right in the line of fire.

It's fun watching Josh since the hero is someone constantly in complete control, someone who knows just what to do when. So you don't have to fret and curl up into your knees shivering in anxiety as the villians are plotting against him - he is the chief plotter himself. Adding a feminine touch to the film is Vidya (Karthika), whose decides Satya is too harmless to not hang around with, and so indoctrinates him into the nitty-gritty of her life.

Josh tries to give out a message - that students should focus on their careers rather than on bravado or hedonism - and that is to its credit, since it is pretty much at the core of its theme. Among the more difficult tasks in the world is to make someone think, especially a teenager, and one of the few things they'll listen to is a movie. Whether Josh places genuine emphasis on a social reality or is just an effort to have different script, it is bound to impact a few wayward minds.

Naga Chaitanya has a role relatively easy to emote (this is no Arya), and he manages to muster up most expressions needed - e. g. intensity, intensity, intensity. The frailties are peering from behind the curtains everytime there is something needing more expressiveness, though such scenes are kept to the bare minimum. Does he have a future? Yes. He perhaps has a flair for brooding roles, he will pick up on other emotions and, mostly, he's Nagarjuna's son, remember?

Karthika is more expressive (and pretty), but her role appears to have gotten chopped off at the editing table - she's barely there in the second half, and the movie appears to vacillate over the idea of introducing a second heroine. J D Chakravarty doesn't make much impact as a villian - more due to a poorly-written character than due to his emoting - which is a blow to the film since it impacts the good-vs-evil angle significantly. Brahmanandam is completely wasted in a similarly under-scripted role. The music is a little above average, with a couple of romantic songs in the first half between Naga Chaitanya and Karthika standing out for the cute and creative vignettes.

Josh has a good first half that almost makes you nervous that they can't keep that up. Like we at fullhyd.com always say, it's best to face our fears, and to help you do that, the film does lose some of its intelligence in the second to get tantalizingly close to screwing up - but fortunately, still manages to hang on there and wait for help.

Catch this one - it's a good change after all those times you watched Magadheera.
Share. Save. Connect.
Tweet
JOSH - YOUTH ROCKZZZ SNAPSHOT

RATING
2
Engolkar Kumar on 14th Sep 2009, 6:09pm | Permalink
HI guys, don't ever watch this movie. I have seen its trailor. The heroin looks like Mummait Khan, in fact Mummait Khan will look better than this Kartika. And the music, in the song "Bad Boy", the starting music of the song is irritating.

It is the worst movie produced by Dil Raju.

vikas kumar on 6th Sep 2009, 3:05pm | Permalink
Hi guys don't expect a blast or full fights like that, it's really like a practical movie than simply wasting of time by showing unnecessary and extravaganza things.

Coming to Chaitu it's really a treat for audience, it's not that simply saying that hero act as experienced one. It's that every one feel like that only. Once the movie starts, after half an hour, viewers simply involve in the movie and forget that this is a debut movie of Chaitu.
NOT even a single minus in his performance...

And coming to the story, I feel that this is a really really hard subject to any director a single mistake or a single frame can completly spoiled if it's shot in a wrong way...

I really felt anxiety throughtout the film thats whats the hero going to do next. That anxiety is till the ending of the movie which keeps the audience to stick on the seats.

Heroine did really well it's a bubbly character. Songs are good and they are not seemed to be like songs they are a part of story only.

Overall it's definitely a movie that should be watched by youth and as well as parents of youth..


Pros: NAga Chaitanyas full fledged emotions and action and story of the movie
Cons: nothing more one should not expect more extra heroism, a little bit comedy

Engolkar Kumar on 6th Sep 2009, 11:34am | Permalink
Hi all, first of all I want to say that I have not seen the movie. I don't understand when we will grow up and until when this bloody "varasatwam" continue. We tolerated Nageshwara rao, Nagarjuna, and now Naga Chaitanya, and tomorrow his son or daughter. This must be stopped. This is what I think and this is my opinion.
Vpat on 6th Sep 2009, 9:48am | Permalink
Instead of going for over the top dialogues and visuals like some other heroes we know in their debut films, Naga Chaitanya is calm cool and collected. Kudos to Dil Raju's team for placing emphasis on the story instead of bending down to show "heroism".

ADVERTISEMENT
This page was tagged for
Josh - Youth Rockzzz telugu movie
Josh - Youth Rockzzz reviews
release date
Naga Chaitanya, Karthika
theatres list
Follow @fullhyderabad
Follow fullhyd.com on
About Hyderabad
The Hyderabad Community
Improve fullhyd.com
More
Our Other Local Guides
Our other sites
© Copyright 1999-2009 LRR Technologies (Hyderabad), Pvt Ltd. All rights reserved. fullhyd, fullhyderabad, Welcome To The Neighbourhood are trademarks of LRR Technologies (Hyderabad) Pvt Ltd. The textual, graphic, audio and audiovisual material in this site is protected by copyright law. You may not copy, distribute, or use this material except as necessary for your personal, non-commercial use. Any trademarks are the properties of their respective owners. More on Hyderabad, India. Jobs in Hyderabad.