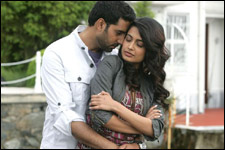 Deepa Garimella / fullhyd.com
EDITOR RATING
5.0
Performances
Script
Music/Soundtrack
Visuals
7.0
4.0
7.0
7.5
Suggestions
Can watch again
No
Good for kids
No
Good for dates
Yes
Wait to rent it
Yes
Damn that one stubborn revealing finger print on the most obvious of all places. You know, the thing that the "International Vigilance Squad" looks for / discovers last in its investigation of a mysterious death abroad of a high-profile NRI; a death that takes place in the presence of 3 equally high-profile expats (one of whom is an aspiring PM of a South East Asian country and has questionable sources of party funding, one is a drug dealer who runs a thriving casino business in a Middle East Asian country, and one is a Bollywood bad boy wanted in a couple of cases).

Indeed, as far as logical perfection is concerned, movies that want to be racy whodunits are treading landmine-filled territory. It is only the most consummate of story-tellers who can pull off that flawless potboiler and not invite a single complaint from their audiences.

An alternative, of course, is to have your film star Aamir Khan.

Game is no Sydney Sheldon, but keep your expectations mild, and it is an engaging flick in its own right. Sure, there are some who think logical loopholes and Abhishek Bachchan have no place in a heady crime thriller, but if you want something to go with those expensive tubs of masala popcorn and the Coke, this one doesn't really wreck your day.

Well, at least pre-interval, it doesn't. The mystery builds up nicely in the first half of the flick, and Anupam Kher's quiet but impactful screen presence shapes the way the film crackles with suspense.

However, the way the mystery is unravelled, plus Bachchan Jr's embarrassingly unsuccessful attempts at being a casual wise-cracking Bachchan Sr (who, as we all know, can make the cheesiest of PJs sound like works of art that can be embossed in gold), kind of messes it up.

Also, there are several no-explanation moments - like how the masked intruder managed to break into the Thai PM's home. Or the obvious "twists" - with one of the characters turning out to be an undercover agent and with none of his past explained further.

However, what is good is most of the leading cast. Anupam Kher and Boman Irani have easy jobs they can sleepwalk through. For Kangana Ranaut, this is a significant step away from her stereotype of the mentally-unstable chick, and she's impressive. Shahana Goswami isn't given much to do, but Sarah Jane Dias is given loads to strip. Jimmy Shergill is under-utilized, as he always tragically is. So is Gauhar Khan, actually.

With Greece and Turkey taking up quite a bit of the visual background, the film is a good-looking, sleek well-shot thriller. Shankar-Ehsaan-Loy's score is about all right, and while the trio might not have dished out chart-busters, the romantic number picturized on Sarah Jane Diaz and Bachchan is quite lilting.

Like we believe, you don't get pasta for dinner everyday, and sometimes, that pack of waxy, pasty ready-to-eat macaroni does make for a decent filler. Maybe only sometimes, but it sure does.
Share. Save. Connect.
Tweet
GAME (HINDI) SNAPSHOT

ADVERTISEMENT
This page was tagged for
Game (Hindi) hindi movie
Game (Hindi) reviews
release date
Abhishek Bachchan, Kangana Ranaut
theatres list
Follow @fullhyderabad
Follow fullhyd.com on
About Hyderabad
The Hyderabad Community
Improve fullhyd.com
More
Our Other Local Guides
Our other sites
© Copyright 1999-2009 LRR Technologies (Hyderabad), Pvt Ltd. All rights reserved. fullhyd, fullhyderabad, Welcome To The Neighbourhood are trademarks of LRR Technologies (Hyderabad) Pvt Ltd. The textual, graphic, audio and audiovisual material in this site is protected by copyright law. You may not copy, distribute, or use this material except as necessary for your personal, non-commercial use. Any trademarks are the properties of their respective owners. More on Hyderabad, India. Jobs in Hyderabad.