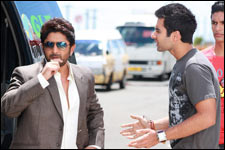 That, as it turns out, is the sole moment of sense in a movie so dumb it would make a street brawl involving Ashmit Patel, Rakhi Sawant and Dolly Bindra sound like a panel discussion at the World Economic Forum.

We're joking, of course. The movie would make just Ashmit Patel sound like the WEF itself. Copied from a Hollywood movie called The Accepted, F.A.L.T.U is like one of those bubblegummy high-school pop serials on Disney - high on gloss and over-the-top coolth, and low on IQ.

The story revolves round a bunch of irreverent losers, led by Ritesh (Jackky Bhagnani), whose mark-sheets look like printouts of Somalia's food production stats. Every college they apply to throws them out, but not before having a good laugh first.

Frustrated by their parent's taunts, these youngsters hit upon a brilliant plan - namely, making up a fake college. All help possible is got from an enterprising man called Google (Arshad Warsi).

The prank quickly becomes a full-blown Tribute To Stupidity, as the college must now become real - the website of Fakirchand Aur Lakirchand Trust University (abbreviated to FALTU) - has attracted real students who have actually applied online. Don't even ask.

These students are in the same league as F.A.L.T.U's founders - they're dying for college admissions as well. They decide to stick on campus since they can't face folks back home.

This is a kind of film that, by the nature of its premise, operates on zero logic, and needs a heavy dose of slapstick humour and truckloads of well-written jokes. However, there's no humour, save for a few lame spoofs on south Indians. Riteish Deshmukh and Arshad Warsi are wasted. The only good joke the film has is the Munni Badnaam Hui one with Deshmukh and Boman Irani - bland, but cute when compared to the bullsh** the film bombards us with.

Just how do three 20-somethings spruce up a run-down college campus and turn it into a brand new university all in a few days? How is one 20-something able to manage a mass of unruly primates? Where do FALTU's students get money for their insane partying? Where does this place get computers and stuff for its alternate education thing? Where is Akshay Kumar when you need him?

Instead, the director relies on silly college talk, bright colours, gloss and the high-powered Punjabi rap to keep the flick going. And about how the film glorifies disrespect towards elders and studies - let's not even get into that.

This film is clearly all about re-launching the Bhagnani kid. He isn't a great actor yet, but he might want to stick to these kinds of comedies actually. The other performances are pretty good, specially the person playing Vishnu (Chandan Roy Sanyal).

The songs are tremendously catchy, though. Party Abhi Baaki Hai won't die soon, for one. And Remo D'Souza may not be a Rohit Shetty, or a Priyadarshan, or even a Sajid Khan, but he sure is one hell of a choreographer - the last song shows you just why.

Skip this one and count mails in your Bulk folder, instead.
Share. Save. Connect.
Tweet
FALTU SNAPSHOT

ADVERTISEMENT
This page was tagged for
faltu hindi movie 134
Faltu hindi movie
Faltu reviews
release date
Jackky Bhagnani, Puja Gupta
Follow @fullhyderabad
Follow fullhyd.com on
About Hyderabad
The Hyderabad Community
Improve fullhyd.com
More
Our Other Local Guides
Our other sites
© Copyright 1999-2009 LRR Technologies (Hyderabad), Pvt Ltd. All rights reserved. fullhyd, fullhyderabad, Welcome To The Neighbourhood are trademarks of LRR Technologies (Hyderabad) Pvt Ltd. The textual, graphic, audio and audiovisual material in this site is protected by copyright law. You may not copy, distribute, or use this material except as necessary for your personal, non-commercial use. Any trademarks are the properties of their respective owners. More on Hyderabad, India. Jobs in Hyderabad.